No, You're a Stoopidhead | Sound Stories & Interviews | Bend | The Source Weekly - Bend, Oregon

Miles Doughty was getting things ready for a family Fourth of July beach day when he called in for this interview. By the time this runs he'll have had an awesome day on the beach, boarded a plane to Germany to play SummerJam festival and then will have flown back to play at the KettleHouse Amphitheater in Montana—all in the span of a week. So not only is he a father to three children, but in his spare time he happens to lend vocals and rip on both guitar and bass for the generation-crossing fusion band, Slightly Stoopid. 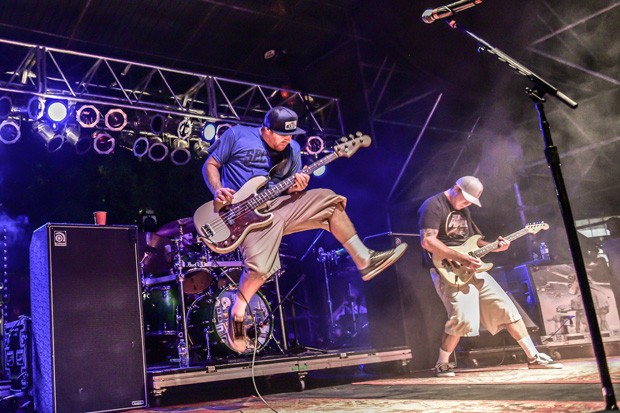 You could label Slightly Stoopid as reggae, punk, rock or even hip-hop. All of these elements would be true to the band's sound from song to song. But to make it simple one could easily go with a three-letter word: FUN. Slightly Stoopid has been providing easy-moving grooves for over two decades now, with no signs of stopping. Way back when, they got signed by the late Bradley Norwell of Sublime, grinding their way through tours, carving out a lasting career with the help of their diehard fans the "Stoopidheads."

Doughty reflects on the beginnings of Slightly Stoopid and how the band has been able to grow along right with its fans for all these years.

Miles Doughty: Oh man, I've been in the band 25 years now. We started in high school. Me and Kyle, we grew up together since diapers. We started the band at like 15, 16 years old. Been surfin,' skatin,' boogie boarding since we were little kids and just been blessed to do what we do that's for sure. Playing in the same band and with someone that's pretty much your brother—most people can't say they've got a homie they've known for 10 years, let alone 40. It's pretty cool to share that with him, travel across the world and hang with your best friends just playing music.

SW: Were you guys into music even before the band formed?

MD: We listened to music but we weren't like big musicians. We were just kind of beach kids. We grew up in Ocean Beach, San Diego. We started watching music videos and we saw this crazy Mötley Crüe video and we were just like, 'Man, we need to start playing some guitars!'

SW: What's the biggest thing you think you've learned over this long career in the industry?

MD: It's hard to say just one thing. But always follow your dreams 'til there's nothing else left. That's all I can say. We've been out there, we've toured, kept through the grind and loved playing for the fans. We have these crazy fans called the Stoopidheads that fuel the engine. It's really cool to have that organic fanbase that has grown with us the whole way. It gives you perspective on life and the ups and downs. We've seen it all and these fans have seen it with us. Always just believing that you can do it, and to keep playing and do it cause you love it—that has been a part of success for the band.

SW: Was there a moment when you guys were starting out that things clicked, and you knew it could maybe go to that next level?

MD: You could never foresee what it has turned into today. You could never really be going, 'Hey, this is it!' I think we thought that when we first got into a tour bus. We were like, 'We made it!' And an hour-and-a-half out of town the bus broke down. This was like our first experience in a tour bus. I think you just learn so many cool things along the way.

What's cool is that the fanbase we have kind of grew with us. So, they're old enough to where they're having kids and their kids are at the shows and they're fans of the band now. It's such an eclectic mix of fans—10 years old to 65 years old.

SW: Are your kids big fans of your tunes?

MD: Yeah, but my kids also don't really care. It's like, 'Yeah, whatever, dad.' I've got a 10-year-old, a 7-and-a-half-year-old and a 2-and-a-half-year-old. They think it's cool 'cause their friends are like, 'Oh, my dad's a fan' or whatever. We all grew up in the same neighborhood, kind of, so all the parents of the kids they hang out with are people I knew or went to school with. But they don't get weirded out or geeky about it. They think it's kind of silly. 'Oh, OK, dad's gotta go. See you in a few days!'

SW: You guys have been doing these huge summer tours for a while now, and along the way have toured with some really cool artists. Do you have any memories from playing with guys like Snoop Dogg or other artists that stick out to you?

MD: I mean, honestly, every summer has different memories that I'll always have in the brain. When you spend three months with a band and you're up there jamming together you learn a lot about them and see the kind of people they are. When we were touring with Cypress [Hill] we would jam together every day just like anyone. When Snoop was with us he got up and flowed during our set. It's like a camaraderie. It's one of those moments you pinch yourself like, 'Holy sh*t, dude, I'm sitting here playing bass for Snoop Dogg right now!'