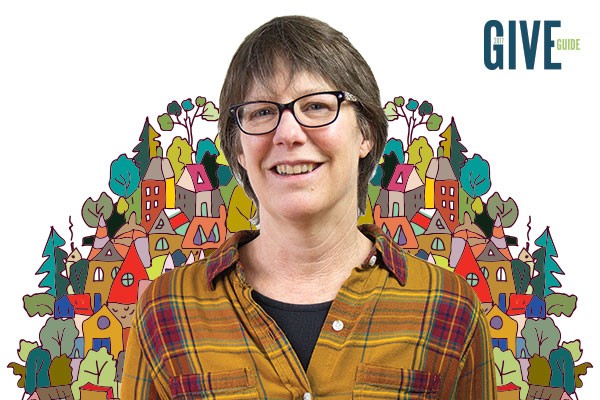 veryone from experienced broadcasters to rookie podcasters will tell you: Radio's a lot more complex than it might appear.

There's endless hard work going on behind the scenes. The fact that you don't notice all the moving pieces while listening to KPOV, Bend's community radio station, is a testament to Jill Mahler's expertise.

"My current role as station manager is largely administrative, which seems to be one of my strengths—making sure the organization is healthy and growing," says Mahler. "Also, overseeing all the myriad things it takes to run a radio station and a nonprofit entity—keeping all the balls in the air."

Among her many strengths is orchestrating the station's fall membership drive, which just met its goal of raising more than $27,000, including gifts from over 330 KPOV supporters.

Ironically, Mahler came to radio with a background in "visual" artistry as well as office management. "The combination of those things led me to work at Arts Central, the now-defunct local nonprofit arts organization that developed the Art Station and Mirror Pond Gallery," says Mahler. "I worked part time in both of those locations, as well as in their administrative office, at various times, and that's what I was doing when this opportunity came up."

"I'm inspired by the passion and creativity of all the people who participate in community radio." — Jill Mahler tweet this

Her KPOV career began in 2008 as a part-time office manager. "When I saw the job posting, it seemed like a perfect fit for me—a community-centered nonprofit organization working in the arts and culture realm. The station had only been on the air for three years at that point, so it's interesting to see how far it's come since then."

Currently, around 70 volunteer hosts produce more than 40 local programs—including music, talk and community affairs shows including "The Point," KPOV's signature show airing weekdays at 9 am. While seasoned on-air radio personalities have years of experience upon which to draw, KPOV hosts receive comprehensive, but limited training. They're actually your friends and neighbors. After reading this, maybe one of them will be you.

Mahler's job description covers much more than what you hear on the air. She says the station "offers a platform for local organizations, particularly nonprofits, to get their message in front of the public. So, a big part of our work is to help these other charitable groups advance their own missions. It's also a platform for local artists and musicians to get their work in front of a larger audience than would otherwise be possible.

"It's the personal connections I really value the most," says Mahler. "We have a very small staff, so we rely on volunteers to do the bulk of the work at the station. Then there are also all the people from the community who come on air—the musicians who come in to perform, the representatives from various organizations who come to talk about their work, and the kids who attend our DJ classes and Kids Camps. It feels like a community hub, where people come together to create this wonderful thing.

"I'm inspired by the passion and creativity of all the people who participate in community radio."