Harboring a community of families

Wearing a hard hat, Kevin Gehrig strolled through the almost-completed North Star Elementary on a recent afternoon. Gehrig, the principal of Bend-La Pine Schools' newest school, waved with an easy familiarity to builders adding finishing touches. Since the ground breaking on May 1, 2018, Gehrig has spent many days here, witnessing and sometimes giving input on the realization of the district's newest, northernmost school in northwest Bend. North Star Elementary greets students on Sept 4. 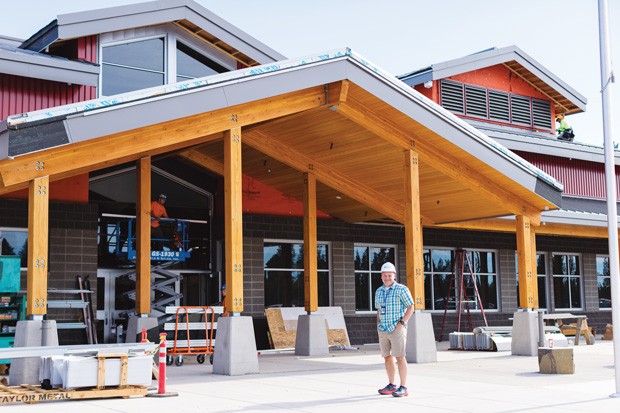 "Thanks for all you guys are doing," Gehrig said to one worker who strode down a bright hallway while carrying a load.

"You're a great example," the worker said with a smile.

While the thrumming bustle of a recent visit to North Star Elementary may call to mind scenes from the popular animated children's program "Bob the Builder," the school is filled with references to nautical exploration. Its colors are navy and silver and sunlight drenches bright, exposed Douglas fir support beams, which evoke ship masts. Collectively, the student body is referred to as The Navigators. Sturdy metal siding protects the concrete and wood-frame walls that anchor the $33.2 million school.

"We joke that we build these schools to last 100 years," Gehrig said.

Twenty-four classrooms are built into the school, yet its inaugural classes will only fill 11. About as many teachers will have joined on as well. Kindergartners will be divided between two or three rooms. First, second and fourth graders will be split between two rooms each. Third and fifth will each fit into a respective classroom. While North Star will welcome about 250 kids this year, it can ultimately accommodate about 600 children, Gehrig said. He's excited to show them many aspects of the school, such as the media center, for which he's ordered 5,200 new volumes of books. And then there is the kiln where students can fire their first pieces of pottery. Outside, a football field-size yard is home to two playgrounds.

It's been really inspiring work. It's just so exciting to develop a vision for a school ... to get in there, meet my students and their families and build a community of learners.-Amber Linn, North Star fourth grade teacher tweet this

"We're focused on four areas: the idea of commitment, compassion, courage and curiosity," Gehrig said. "With commitment and courage, students will participate in a wide variety of activities and responsibilities within their school. [They touch on] the idea of contributing to a greater purpose. ...It's also about fostering a place where students feel they can demonstrate empathy and concern for others."

Amber Linn, a fourth grade teacher, is one of the ICCL teachers who are helping chart the school's course.

"It's been really inspiring work," Linn said. "It's just so exciting to develop a vision for a school ... to get in there, meet my students and their families and build a community of learners."

Linn's two children, Gabby, 5, and Henry, 8, are transferring to North Star from Pine Ridge Elementary, where Linn worked with Gehrig for about a decade. They share their mom's excitement, she said.

"Having them be able to share in this journey is something that I think will be really special for our family," she said.

This process isn't new to Gehrig. He helped open Pine Ridge Elementary in 2003, becoming the principal in 2006, he said. Before that, he worked as a special education teacher and a student services coordinator at Jewell and Elk Meadow elementaries, respectively. Gehrig has also served as vice principal at Ensworth and Pine Ridge elementaries.

Two of Heidi McHugh's children, Caden and Hailey, who will be third and first graders, respectively, are also excited to attend North Star Elementary. McHugh's oldest daughter, who's entering sixth grade at a middle school elsewhere in the district, feels like she's missing out, McHugh said with a laugh. McHugh was previously a member of the Parent and Teacher Organization at High Lakes Elementary. She will also be on the PTO at North Star Elementary.

"My third grader is really excited because they'll be upstairs," said McHugh, adding that her children are also jazzed about the dedicated lunch area that is separate from the gymnasium, which also houses a stage for school performances.

"I really believe it's a top-down effect," McHugh said. "If the administration is awesome, they're going to hire amazing teachers. Then the teachers will provide a wonderful learning environment for our children. And if the kids are happy, then the parents are happy in turn and they will want to participate more at school. ... I think Kevin and the teachers I've met are awesome. We're all in it together to make this North Star community of families incredible."