Not Singing the Swan Song

The tales of two trumpeter couples in Central Oregon

The Western U.S. population of trumpeter swans, Cygnus buccinator —Cygnus from the Latin for swan, and buccinare for "to trumpet"—fell into deep trouble when their feathers and skin became a valuable commodity in the late 1800s.

That same species you see today on the Deschutes River, Lake Aspen and Sunriver's ponds, were at one time threatened with extinction by market hunters and feather merchants. In those dark ages, human beings either had no idea of the consequences of over-harvesting, or just didn't care, because they thought there was no end to the resources. 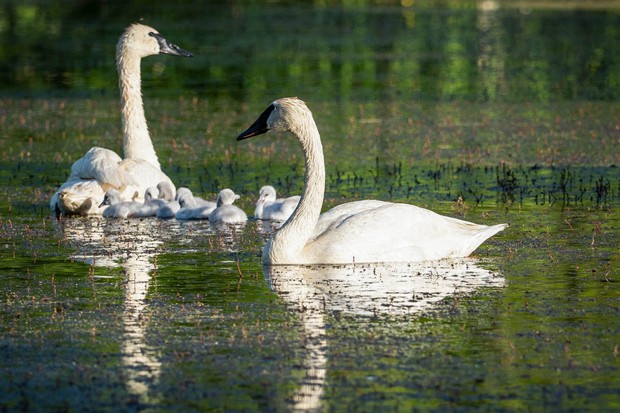 Here in Central Oregon, the Cyrus family unknowingly began a trumpeter swan recovery project of their own. Ever the pioneer, Keith Cyrus understood the importance of water to his family's future. In 1959 he built a 12-acre water storage reservoir, introduced Central Oregon to solid set sprinklers and later drilled the first irrigation wells in the area.

Around 1997, the Cyrus' bought the land next to their family farm for what is today the Aspen Lakes development. The Cyrus family clustered the home sites and created the golf course under the guidelines of the Audubon International Signature Sanctuary Program.

In addition to being a beautiful reservoir, site's Lake Aspen provided habitat for waterfowl and a multitude of song birds, and the family purchased two pairs of trumpeter swans to be a lovely addition.

Unfortunately, one swan was killed by an arrow; another by a dog. The most recent loss was in October 2017, when one died of unknown causes. That left a lone female (pen) named Eloise. One of the first things they did was purchase a bubbler to keep the water open and ice free.

As a resident of Aspen Lakes, Robin Gold—who happens to be a certified animal rehabilitation technician—has taken a strong stand in seeing that the Cyrus' swans become a vital part of the Trumpeter Swan Recovery Plan.

With the biological help of a male swan (Pete), purchased by the residents of Aspen Lake — Eloise produced her first offspring, Sydney. That was last year. This year, Eloise and Pete have eight little cygnets following them around.

Unfortunately, the swans have become such a local notoriety that residents and visitors in the area have begun to trample the private land trying to get a look at Eloise and her family. Aspen Lakes is a private association with private roads—so visitors are not encouraged.

At just about the same time Gold's plan started rolling, Elise Wolf, a rehabber of small birds in Sisters, received "Hope," a gunshot-victim swan from Oregon Department of Fish and Wildlife's Summer Lake Wildlife Area. Wolf installed a 7-foot pool in her main treatment room to help the recovery of the swan. While her housing kept the swan healthy and free of further injuries, even after hours and hours of TLC and treatments, the swan succumbed to the severity of her gunshot wounds.

Swan rehab requires special permits due to the unique needs and housing requirements of large water birds for their health and safety. In 2014, after helping Grace — a wild trumpeter who had a fishing lure stuck in her tongue — Wolf and her husband obtained the permits and built a formal rehabilitation center, designed large enough to get a swan-sized pool inside of it. (All in their house).

Wolf's facility in Sisters, Native Bird Care, was key in getting Grace to the Sunriver Nature Center's pond, where she was introduced to a male named Chuck. Between them they raised a cygnet that eventually was added to the ODFW's Summer Lake Wildlife Area, joining other trumpeters.

But even that success story ended in tragedy: On Thanksgiving Day, Chuck was shot by a hunter who just had to kill a swan, even if he didn't know which one he was shooting at. The perpetrator was arrested, fined and lost his hunting privileges for three years.

Now there is a new partner for Grace, Gus, purchased by a Sunriver Nature Center fundraiser. He's happy to be in the sparkling sunshine of Central Oregon with a new mate.

Grace and Gus didn't waste a lot of time starting a new family; at last count, according to local biologist Jay Bowerman, the pair already had four eggs in their nest.

It is hoped that between Gus and Grace, and Eloise and Pete, there will be a number of new members of the growing trumpeters at the Summer Lake Wildlife Area. You just never know what will transpire when you introduce birds in peril to people who care.