Now Hiring, All Positions, All Shifts

Why are businesses having such a tough time filling open positions?

When the pandemic started and non-essential businesses closed, the essential workers were hailed as heroes across the country. The people whose work was necessary during the pandemic—health care workers, food supply chain workers and first responders, to name a few—kept working tirelessly. Now, as vaccinations become widely available and COVID restrictions ease while jobs return to the market, some claim that nobody wants to work and that Unemployment Insurance is keeping people on their couches. 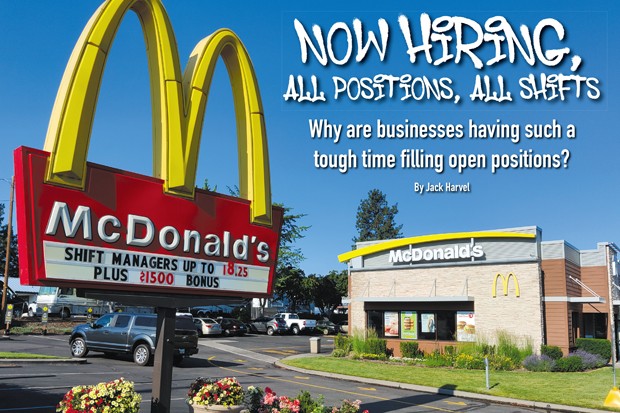 Businesses are frustrated that positions that had been easy to fill at one time are more competitive than ever. Has the workforce been placated by government subsidies, or is the economic recovery from a once-in-a-lifetime pandemic disrupting the workforce in unforeseen ways?

The hiring shortage is palpable for most people who see signs advertising jobs across town. "Now Hiring All Positions," a sign outside of Black Bear Diner on Third Street says. "Now Hiring Cooks $1,000 Bonus," McMenamins advertises in downtown. A $1,500 bonus and an $18.75 hourly wage is posted under McDonald's golden arches on Century Drive.

In May, Sunriver Resort announced it would pay all new housekeeping staff a wage of $25/hour. All these jobs are competing for fewer workers than were available at the start of the pandemic.

"I would say we average 20 to 30 applicants a week typically right now," Katie Merickel, branch manager for SelecTemp Employment Services said. "In the past it'd probably be 30 to 40. So, we're seeing 25% less of our applicants that we normally would."

SelecTemp mostly staffs for jobs in construction, manufacturing and production—not the types of businesses that are most visibly seeking workers, such as restaurants, retail and hospitality businesses. Merickel said every industry has been affected to some extent, and that they're working with some restaurants now who have never used a staffing agency.

“I believe that we must strive to not go back to the pre-pandemic economy, but rebuild in a just and equitable way, and make sure that the disproportionate impacts are top of mind when we're making policy decisions.” —Graham Trainor tweet this

"They've never needed a staffing agency or a partner to help them find employees; people came to them organically," Merickel said. "We have more job openings than we have people, and every single business in town could use a solid partner, and some more applicants coming through their door."

City of Bend Business Advocate Ben Hemson confirmed that a lot of businesses are feeling the heat when trying to attract new workers. In the City's most recent Business Advocacy Newsletter, businesses were asked what their most pressing issue is. The newsletter was sent to over 6,000 registered businesses in Bend, and several hundred responded. Over 85% of respondents listed hiring as their biggest concern.

"I would say this is top of mind for pretty much every business I speak with," Hemson said. "It used to be the second or third thing that came up during a conversation back in the spring, and now it's the first one. How do I get employees? How much do I have to offer? How can I ensure they stay?"

Businesses are going to greater lengths than they have ever had to avoid closures, cut hours and slow service. They are offering sign-on bonuses and higher wages to employees to get them in the door. It's not always working, and the effects are being felt as businesses like Pacific Pizza have had to cut hours and public services like Cascades East Transit has had to reduce Saturday routes.

"It's an employee-driven market. And so, we call it WIIFM. And it's 'what's in it for me,'" Merickel said. "If you could get a job that pays more, you get to work with someone amazing, and it's located in a great place and there's all these perks and benefits to it, then you're going to get to go to work there versus a place that maybe doesn't offer any of that."

Employees have more power than they have had because of the wide range of options presented to them right now, market experts say.


"We measure broadly across the local economy; the only good indicator we have is help wanted job ads," said Damon Runberg, regional economist for the Oregon Employment Department. "And those are at historically high levels today, which is, we have more job ads in Central Oregon and Deschutes County than we've ever seen before," 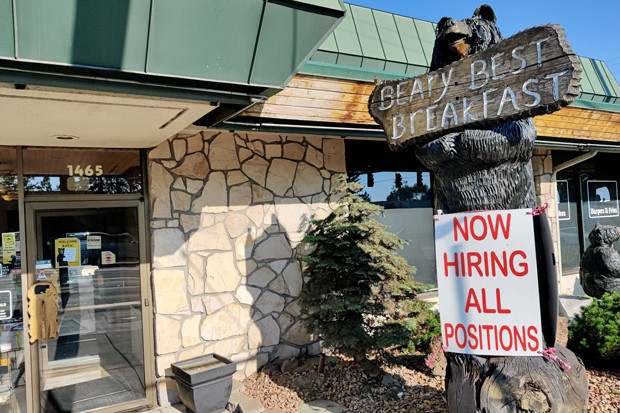 Runberg says there are a few reasons that there are so many jobs available right now. First, that businesses, mostly in the leisure sector, are trying to get back to full employment after laying off staff during the pandemic. The second reason is that nationally, the U.S. is going through an unprecedented wave of quitting jobs, according to the U.S. Bureau of Labor Statistics' Job Openings and Labor Turnover Survey. A lot of these, Runberg said, may be tied to a surge in retirement among Baby Boomers who were able to leave the workforce during COVID-19 after the stock market rebounded. The main factor, though, is the competitiveness among employers.

"The big one, as far as quits, is the increase in wages that we've seen from the competitiveness of the market today," Runberg said. "So because there's so much competitiveness and so much wage growth, especially on the low-wage side, you're seeing a lot of worker mobility from one job to another."

The third big factor for the labor demand is that many businesses are simply growing, and that there is a pent-up demand for goods and services that businesses need to expand to meet.

"So, sort of synthesize those three: recovery, replacing quits and economic growth," Runberg said. "You put all those together that that leads to a ton of labor demand on the market today."

“The market rate for that person is closer to $15-16, maybe $17 an hour today. So, you're going to make significantly more money in the marketplace than you are going to be sitting at home.” - Economist Damon Runberg tweet this

The reasons Runberg gave cut against a popular narrative that suggests enhanced unemployment insurance benefits, which provided an extra $300 on top of the regular UI benefits.

"The boost to unemployment insurance, which at this point is likely not a huge factor any longer as far as keeping people out of the labor market," Runberg said. "Mostly, we've seen between January and May there was a 60% reduction in central Oregonians on unemployment insurance benefits."

Enhanced UI is set to expire on Sept. 6 and Oregon has already reinstated work-search requirements for UI recipients, which means people will have to prove they're searching for a job and haven't turned down any job offers to receive benefits. Also, the benefits themselves can't compete with the higher wages offered by employers right now.

"If you were someone who's making $12.50 an hour near minimum wage before, and you were getting full wage replacement on unemployment insurance, at what point do you decide that the market rate for your labor is so high that what's out there available in jobs is better than just getting your $12.50 an hour sitting at home on unemployment insurance," Runberg said. The market rate for that person is closer to $15-16, maybe $17 an hour today. So, you're going to make significantly more money in the marketplace than you are going to be sitting at home."

It's not clear if the appreciation of labor, particularly among those earning lower wages, will last. Runberg said a lot of the symptoms of the labor shortage should pass, but wages are usually "sticky" and tend to fluctuate in bursts rather than gradually.


"Whenever wages move, they move up, they almost never move down," he said. "They tend to move more in stair steps. They're flat for a while, and there's a big jump, and then flat for a while; I think we just hit a stair step, and we just jumped the market rate."

For labor advocates, the wage gains are a welcome step for a group of workers whose wages have been stagnant for years. 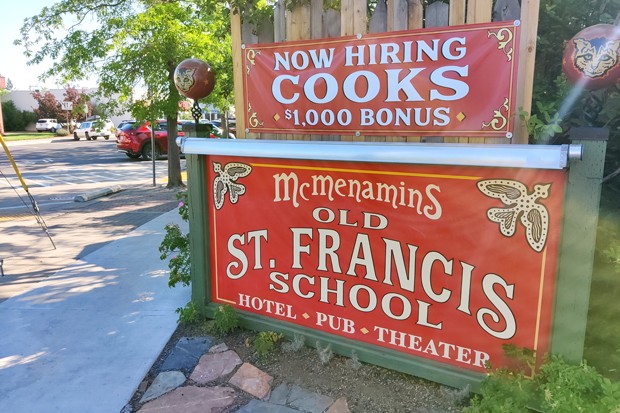 "I've often asked the question, is this really a labor shortage crisis, or is it a low-wage, no-benefit crisis?" said Graham Trainor, president of the Oregon AFL-CIO, the regional affiliate of the nation's largest federation of unions. "Who's bearing the burden here, and what the reality for essential workers has been 47% of essential workers don't make a living wage, their total compensation puts them below the poverty line."

Trainor said he hopes the wage gains are permanent but said the shortage itself is a double-edged sword and harms some workers, despite increased pay.

Staffing professionals have said one way applicant behavior has changed is that workers are bargaining more to ensure their next job aligns with their values.

"The key is engagement, staying in touch and aware and asking good questions of your candidates, knowing what their motivation is, and then making sure that your opportunity aligns with that and that you remind them of that," Merickel of SelecTemp said.

The merging of company and personal goals could represent a real change in labor relations for essential workers.

"The pre-pandemic economy wasn't working for most working folks, it was leaving a lot of people behind to begin with, especially workers of color and women," Trainor said. "I believe that we must strive to not go back to the pre-pandemic economy, but rebuild in a just and equitable way, and make sure that the disproportionate impacts are top of mind when we're making policy decisions."

Related State of the Central Oregon Unions: In honor of Labor Day, a short history of the local labor movement and the challenges facing workers in the time of COVID-19

State of the Central Oregon Unions
In honor of Labor Day, a short history of the local labor movement and the challenges facing workers in the time of COVID-19
By Laurel Brauns
Local News