Opening on the heels of the 2022 BendFilm Festival, a popular short play bundle brings Silent Echo Theater Company back in action, performing live theater again after a two-year pandemic-driven hiatus. The show features seven holiday-themed one-act plays written by six playwrights, two of whom are also from Central Oregon. 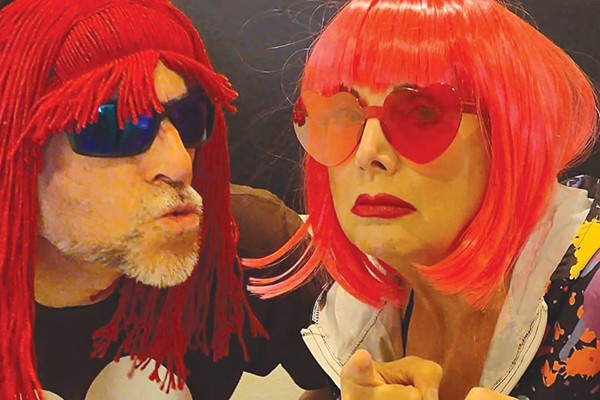 Because this story appears in the Redmond issue, it's worth noting that the Hub City features large in this weekend's festival of short plays, "Now You're Talking, Holiday Edition," opening Thursday at Harmony House in Sisters. Richard Choate of Redmond directs two of the seven works, and several Redmond actors appear in multiple plays. All of the actors and directors reside in Central Oregon.

First in the lineup is a spirited musical introduction, "Turkey Rap" by Laura Lee Coffman, performed by Laura Lee and Michael Coffman, both of Bend. Audiences may have seen another of the duo's works at last week's Tapestry of the Arts at the Cascades in Bend. Their comical barnyard skit, "Hen Party," was revived from a previous short play festival there.

"The Last Nutcracker" follows—a dark comic farce written by Central Oregon playwright Persephone Vandegrift in which a creepy kid terrorizes the iconic ballet star just as he is trying to show the ropes to his young protege.

Redmond artist Richard Choate directs "Slip and Fall," about a surprise visit from a weary Santa, and "That Night," a more serious piece about trauma and recovery. Choate also plays a part in "That Night," a piece he considers to be "one of the poignant ones." The play finds a man struggling in the aftermath of a fatal crash. "The two plays I'm directing both have a nice depth to them," he says. "I think it's nice when a play is funny, but I think when it leaves you feeling a certain way, then I think that's more valuable. I think in order to get that real play feel, not just the skin, a playwright almost has to be a poet, expressing much in few words. Playwriting is a craft, like writing a novel but more on the level of poetry," he says.

In "Slip and Fall," Mary knows it's the real Santa who falls down her chimney on Christmas Eve, but her husband isn't convinced – which makes it all the harder for the jolly old elf to deliver his special, very personal message. While "Slip and Fall" is more of a constructed work, Choate says, "That Night" focuses more on the emotion of the story. "It digs into the characters' motivations, so the conclusion is both surprising and inevitable," he says. "When that happens, you get what's called a perception shift. That's really the art of the play. That's what makes it a play rather than just a story."

Jim Wurm of Redmond appears in "Slip and Fall," along with Redmond duo Steve and Jenny Walker. The Walkers also appear in "Figgy What the Hell," directed by Laura Lee Coffman. In "Figgy," Christine gets puzzling reactions to the treats she brings to her office's holiday cookie exchange, a mystery eventually sleuthed out by her teenage son.

Keith Whalen's "Coming to Town" should keep audiences guessing as "reveal after hilarious reveal" keep coming to the surface when an adult child struggles to discover the truth about Christmas from his protective parents. (Harmony House owner Katie Cavanaugh appears in "Town" as the child's mother.)

"Never Too Many" will doubtless bring to mind the nation's last Blockbuster store, which continues to serve customers in Bend. "It's a very poignant play about a man closing his video store on Christmas Eve," Choate says. A regular customer pays a final visit to the store, resulting in a thoughtful conversation.

Manning notes that this year's daylight savings time begins on Saturday night, so audiences attending the closing performance on Sunday should take note of the time change. Reservations may be made in advance from the Silent Echo website. Donations may also be made online, or at the door using Venmo.