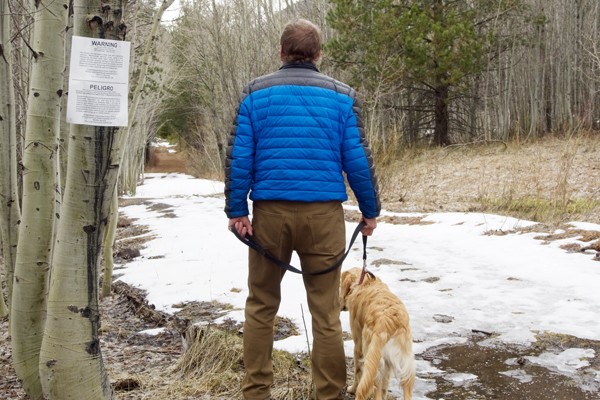 Update: Wildlife Services confirmed on 4/18 the traps and signs in the area along Tumalo Creek have been removed.

Chris Morrison has lived near the Skyliners neighborhood—minus a few years for college—since 1976. In the fall of 2017, while on one of his almost daily hikes with his golden retriever, Sunny, and his wife, Diana, Morrison spotted what he called a "small piece of plastic coated paper tacked to a post warning people that traps and snares were being used to 'capture' invasive animals."

Morrison says the sign was on a post along the trail that goes from the lower parking area on Tumalo Creek to Tumalo Falls. He says for the first time in 42 years, he didn't feel it was safe for his dog to jump into a pond in the National Forest—nor did he want to hear about somebody's else's pet lost for the reasons he was given for the trapping. I took Morrison up on his offer for a hike to check it out.

Morrison and I—and Sunny, of course—parked in the tiny lot near Skyliners Lodge. Crunching up the gravel road—open in the summer to access the Tumalo Falls parking area—we then took an abrupt left, ducking below the aspen branches, onto another smaller trail road with signs that warned about buried powerlines below.

Morrison said Diana spoke with staff in the City of Bend's water department, who said one reason for the trapping of beavers in the area was that they back up the culverts, which could flood the road. About 10 minutes into our hike, we spotted an 8.5-by-11-inch paper sign, tacked to an aspen tree, warning of trapping in the area. It was adjacent to an attractive pond, shimmering in the daylight—a perfect place for a dog to swim. Morrison said in his years hiking the trail, he's seen beavers along the banks and was worried about pets, or kids, swimming in the water.

"I'm mostly worried about losing a pet, or a child being pegged—that's my biggest concern," Morrison said.

Morrison said there were two more signs, both tacked to gates on opposite ends of the main trail, but he was concerned about the sizing of the signs, so he called the U.S. Department of Agriculture, who posted the signs. They, Morrison said, referred him to the City's water department, who told Morrison that people got upset when they find trapping is being done.

The trapping of furbearing animals has been happening in Oregon since before Lewis and Clark made their epic trek to Astoria. In fact, it could be argued that trapping is what made Oregon a state, since beaver pelts—abundant in Oregon—were collected for fancy hats until the late 1800s. These days, bobcat fur has brought back the fur trade, for use in lavish fur coats sold mostly in Europe and China.

Trapping is legal throughout Oregon on Bureau of Land Management, National Forest and private lands during open seasons, running mostly from late fall into early spring. The practice is regulated by the Oregon Department of Fish and Wildlife. But nuisance animals—which can range from black bears to nutria and most species of birds—can be trapped by Wildlife Services, a division of the U.S. Department of Agriculture's Plant Health Inspection Service, at any time of the year.

That can happen on any type of land—public or private, according to retired veterinarian, Dr. Donna Harris, an advisory board member of Eugene-based Predator Defense, a national nonprofit with a mission of protecting native predators.

The traps in the marshy area along Tumalo Creek were set by the USDA, contracted by the City of Bend's water department to keep beavers from causing problems for the city's water supply, according to Rod Mingus, the city's water operations supervisor. Mingus said the city has no input on where the traps are set, but they're generally placed by the Bridge Creek intake facility and down lower on Tumalo Creek to keep the beavers from moving upstream or causing damage to the two trail roads that have power and water lines running beneath them.

"When they're swimming around, when they do what beavers do, we get a lot of debris and some other things down here," Mingus said. "Not to mention do you want the beaver (waste) in the drinking water?"

Perhaps the biggest point of contention with trapping for users of Central Oregon's outdoor spaces is the possibility of a pet becoming ensnared in a foothold, or worse, a conibear trap—called "killing traps" in ODFW's Furbearer and Hunting Regulations. Conibear traps use nearly 90 pounds of pressure and are designed to strike small to medium animals, such as beavers, on the neck or body—snapping their necks or strangling them quickly. Dogs that get their head pinned between the steel bars have very little time to be released before they die. (The ODFW's website has videos about how to release pets from conibear and coilspring foothold traps).

Dave Williams, director of Oregon Wildlife Services, said his agency uses best practices to mitigate the capture of "non-target" animals, including checking traps as set by state laws and using sizing that targets specific animals, but that accidents do happen.

A 2011 Oregonlive article detailed how a family in Gresham lost their border collie, less than 50 feet from their back fence. The article said the trap was set by the USDA to kill nutria in the pond. The dog was discovered by a neighbor, who, along with the dog's owner, tried to free the collie. The pet died by the water's edge.

Although dogs have been killed by traps in Oregon, the reported number of injuries varies wildly. According to Derek Broman, ODFW's carnivore-furbearer coordinator, only 12 incidents of pets being caught in traps that required veterinary care have been reported to Oregon State University's College of Veterinary Medicine's Dean since 2004. Most cases treated simple inflammation.

However, an article in Outside in 2014 reported that between 2012 and 2014, hundreds, if not thousands, of dogs were snared in traps nationwide. Harris, of Predator Defense, said she believed there were six to eight cases of dogs stepping in traps in Deschutes County between 2012 and 2013 alone.


"Not to mention do you want the beaver (waste) in the drinking water?" —Rod Mingus, Bend Water Department tweet this

In 2015, Rep. Nita Lowey (D-NY) introduced H.R. 2016, the Refuge from Cruel Trapping Act which would have ended the use of body-gripping (conibear) traps in the National Wildlife Refuge system. The legislation met with serious opposition from trapping advocacy groups. Locally, Trap Free Oregon and Predator Defense have been vocal against trapping.

Although the USDA doesn't have to follow state trapping regulations, and they only trap when a resident or governmental body calls to alert them of problem animals, the agency generally tries to follow the rules when it comes to where traps can safely be placed, Williams said.

"Our signs are 8.5 by 11, the same size as a no-trespassing sign," Williams said. "We use best management practice foothold traps, designed with offset jaws, not teeth on them, the same tools biologists use to trap wolves to put collars on them."

Currently, there are about 2,000 licensed trappers in Oregon, according to ODFW statistics. ODFW's Broman said in Deschutes County, there are 125 licensed furbearer hunters and trappers as of the last ODFW report in 2011.

It is a violation of state law to disturb legally set traps in Oregon, but Morrison said he'd take matters into his own hands to protect his pet.

"I would do whatever I had to do to mess with the trap to get my dog out, or anybody else's," Morrison said. "I'd be in a panic."