NYT: Is there a Bend Beer Bubble? 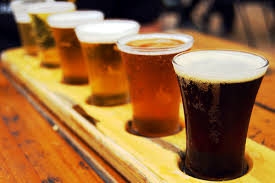 That wasn’t necessarily the gist of the Times Seattle bureau chief William Yardley’s feature story on Bend’s booming beer business, but he did use the “B” word to describe bend’s craft brewing and he wasn’t talking about the creamy foam head. The article was the second in just a few weeks in the Times that spotlights the local beer boom. Yardley, who covers the Pacific Northwest for the Gray Lady, focuses on the economic impact of Bend’s brewing industry at a time when Bend’s other economic engines, including construction and high tech, have sputtered. The article includes references to Bend's beer-related ventures, including, of course, the cycle pub, the silipint, and the Ale Trail. The combination of which probably isn't the foundation of an economic recovery for the region. However, beer is a bright spot, according to Yardley who points out Deschutes Brewery's 400 plus jobs in the state.

Yardley correctly notes that the influx of well-off retires has largely dried up, or greatly diminished since the boom years. However, Bend still retains many of the attributes including climate and recreation that it had before and during the halcyon days. Yardley quotes State Economist Carolyn Eagan who observes that, “What we did for so long was take advantage of the land we have… Well, you can’t export land, but you can export beer,” Eagan told Yardley.

But is there a ceiling for this booming industry? Yardley seems to dismiss the notion. We hope he’s right, but we’re stockpiling pints and 22 oz labels from all the start-ups as commemorative items just in case the Times fails to forecast another Bend bust.