Hurricane Sandy was the tipping point for the NYC Mayor. 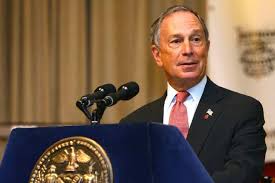 The NYC Mayor, as a supporter of science, cited the possibility global warming as his reason for endorsing the president.

"The devastation that Hurricane Sandy brought to New York City and much of the Northeast -- in lost lives, lost homes and lost business -- brought the stakes of next Tuesday's presidential election into sharp relief," Bloomberg writes.
"Our climate is changing, and while the increase in extreme weather we have experienced in New York City and around the world may or may not be the result of it, the risk that it may be -- given the devastation it is wreaking -- should be enough to compel all elected leaders to take immediate action."

Science! And Bloomberg, who refused to lend an endorsement in the 2008 presidential race, correctly identified Obama as the candidate most likely to invest in green energy.

We wrote about the likely connection between Hurricane Sandy and global warming on Monday. You can find that blog here.