Uballez responded to a reportedly intoxicated man on NW Skyliners Road, later identified as Caleb Joseph Hamlin, a 42-year-old resident of Colville, Washington, who was in Bend to work on a house remodel project. Uballez found Hamlin in the road; the officer claimed Hamlin was initially uncompliant but started following orders after Uballez got his K9 dog out of his car. 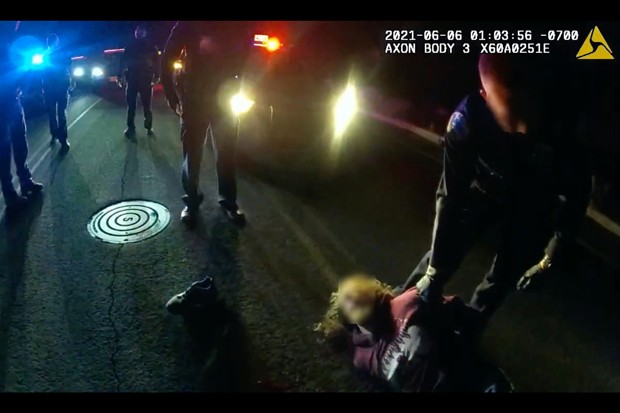 Officers Peter Enna and Martin Tabaco arrived on scene as Uballez put the dog back in his patrol car. Enna and Tobaco said they witnessed Uballez slam Hamlin on the ground, significantly injuring his nose while detaining Hamlin. Enna and Tabaco reported the incident to a superior, and the next day Bend Police Chief Mike Krantz placed Uballez on administrative leave as Bend PD and the Oregon State Police investigate what happened.

"Police officers must make decisions in tense, uncertain, and rapidly evolving circumstances," Krantz said in a press release. "A police officer's decision to use force in that split second may have a long-lasting impact on the person force was used on, the officer, the agency, the community and others. Because of this impact, force responses by police officers deserve scrutiny. When a police officer decides to use force, we must call on ourselves to be accountable for those actions and accountable to our community by ensuring a complete and thorough investigation."

The Oregon State Police investigation found that three Summit High School students allegedly assaulted Hamlin prior to the encounter with police. Two of the students were charged as juveniles for assault, and the third, who was 18 at the time of the assault, could have their case handled via the Deschutes County District Attorney's Emerging Adult Program.

Hummel praised the officers for coming forward against a coworker.

"Officers Enna and Tabaco are the embodiment of what it means to be a law enforcement officer. They understand their job is to enforce the law and keep us safe. I appreciate how difficult it must be to report a colleague for their misdeeds," Hummel said in a press release. "These officers put service to our community ahead of protection of a colleague; I'm proud of them."

An earlier version of this article said Uballez is a former Bend Police Officer, but he is still employed with the department on leave. We regret the error.