It's officially "spooky season," though this year's festivities will undoubtedly look a little different. Halloween itself might not be canceled, but classic door-to-door trick-or-treating is being shunned by many, as handing out candy to strangers has rapidly transformed from a time-worn tradition to a purported health hazard. Local parents and businesses are adapting, bringing Halloween to their young ones while keeping risk low.

The Downtown Bend Business Association is also adapting, publicly denouncing traditional festivities while encouraging flexibility and adaptation. Normally, the DBBA hosts a downtown event filled with costumed kids, trick-or-treating and a large scavenger hunt that includes many local businesses. Rather than throw up their hands and say, "Welp, Halloween is canceled; stay inside," the DBBA moved its annual costume contest to a virtual platform and restructured the scavenger hunt, social-distancing style. "Now more than ever it is important that we support our local businesses," said Mindy Aisling, executive director of the DBBA. "We have a few really fun do-it-yourself Halloween activities for Bend families to have COVID-safe fun! We still want to see all of the great costumes, so we've moved the kids costume contest online. Prizes will be awarded for the costumes that we love the most from every age group."

The contest is open to kids under the age of 12. Simply dress up, snap a photo and submit it online. To play the Halloween Scavenger Hunt, find one of the items listed on the website, take a selfie next to it and post it with the hashtag #bendhalloweenhunt2020. Two winners will be randomly chosen in early November. All Halloween-related activities are mapped out on the DBBA website.

The Source Weekly's calendar—normally full of Halloween-related events—does include a few festivities on Oct. 31 for those wanting to head out. For example, Venardo's Circus is hosting a "Spooky Spectacular Circus Show" at the Deschutes County Fair & Expo Center, while at General Duffy's Waterhole—a go-to gathering point in Redmond throughout the pandemic—a costume party goes along with the music that evening. And in the Twittersphere, other local parents say they'll go ahead with small, neighborhood-focused trick-or-treating, pointing out that the main event (as in, getting candy) takes place outdoors, and the virus does not easily spread on surfaces (like candy wrappers).

But some local parents don't mind the changes this year, explaining they won't really miss holding back on a holiday that centers around refined sugar and tooth decay. "I don't support my children eating candy, so Halloween being canceled really isn't a huge loss," said local mother of three Sara Walker. "I don't think adapting will be too difficult, we've all gotten used to making changes at this point. The girls enjoy carving pumpkins every year, so we'll just have a pumpkin carving party and throw on some classic horror movies."

Mother of two, Katy Ipock, shared the same sentiment. "We never really did Halloween anyway," she said. "My son isn't a fan of candy so the holiday makes zero sense to him. Having a kid who doesn't like candy is obviously a huge win." Safe to say this is a unique case. 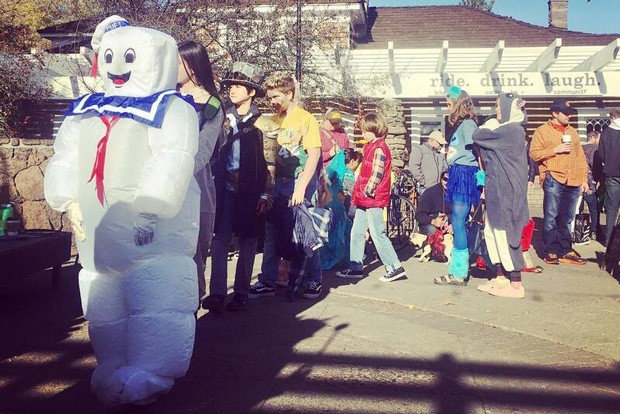 Izzy Warrens, local mother of two boys, explained that while things were still up in the air, her main priority was ensuring that her son was having a good time – and experiencing some semblance of normalcy. "I told my son that we would most likely raincheck on this year's standard activities," she said. "I'm just keeping my ears open this week to see what other community members are saying. We are unsure at this point. We're definitely dressing up, but unsure if we'll be hosting, going to out into our neighborhood or coming up with a new Halloween tradition." Warrens said they'll be skipping the Old Mill, a trick-or-treating draw for families in normal years (the Old Mill does not have Halloween activities on its calendar this year so far), and won't opt for church gatherings, either.

"Maybe truck-or-treating with a ton of sanitizer spray! My main priority is my youngest dressing up and doing an activity that's fun for him," Warrens said. Overall, Warrens said adapting to the changes has been creating resilience and improving communication.

"There are times when my kiddos feel uncertain and upset; they want to see their friends. The lack of social interaction has created frustration, but in that space, they're also learning to get creative and sit in situations that are not ideal. They're learning patience."