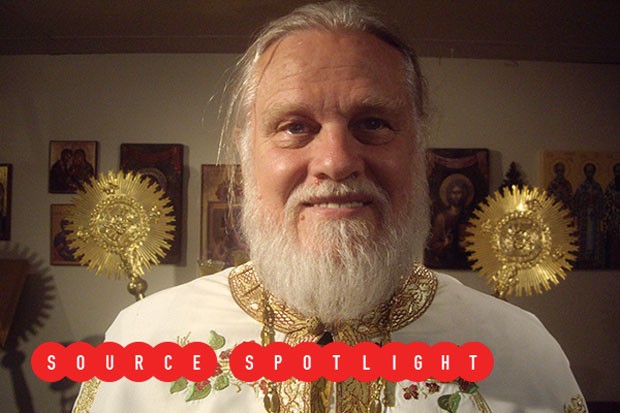 Some Central Oregonians might be surprised to learn that a 2,000-year-old religion is celebrated in a cozy chapel, tucked away in a retail mall on Northeast Division Street in Bend. The Saint Jacob Orthodox Christian Church of Central Oregon can be found in the Whistlestop Business Center between the Orchid Thai Restaurant and Plantd.

Leading the weekly services is Father Damian Kuolt, who, along with his wife, Joanna, landed in Bend about a year and a half ago. The church hosts Saturday evening vespers at 7 and the divine liturgy, "worship of the people," Sunday mornings at 10.

The local church has been in existence for about a dozen years, Kuolt says, backed by a handful of families. A recent honor was hosting a visit by Bishop Benjamin of San Francisco and the West, who also visited when the local church was getting started.

Because Kuolt, who's 67, is currently recovering from a successful open-heart, mitral valve replacement surgery, Sunday services will continue with interim help. There will be no Saturday vespers until Kuolt's expected return later this month.

He says the Orthodox Church is the second largest Christian body in the world, behind Catholicism. He teaches Orthodoxy 101 and calls it "true worship and belief," the original teaching of Christianity. "We're the church that doesn't care what your personal beliefs are. The important thing is what the apostles believed. Let go of your opinions and try to learn what those who encountered Christ believed," Kuolt says.

Kuolt is originally from Kent, Wash., but his family's roots in Central Oregon run deep. His family started the Thousand Trails campground near La Pine, and he knows Bend from the 1970s and the 1980s, when he and Joanna would bring their four kids here. They've been married for 47 years, and those kids—three daughters and a son—now range in age from 31 to 41.


"We're the church that doesn't care what your personal beliefs are." —Damian Kuolt tweet this

For 27 years, his grandfather was a Lutheran missionary in India, where Kuolt's father was born and raised.

Out of high school, Kuolt went to the Air Force Academy in Colorado Springs to major in astrophysics. He was on a five-year fast track to go to flight school, but soon figured out he was being groomed to become a helicopter pilot headed for Vietnam. "I was half conscientious objector and half scared to death." He attended for two years and then "bailed out," he says.

In 1970, he had $50 and a bus ticket to Los Angeles, where he ended up working as a studio guitarist at Hollywood Sound Recorders. Kuolt says he became involved in the Orthodox Church in the 1980s.

Kuolt says a pending goal of his is to open a coffeehouse/bookstore "where people come to read and contemplate and discuss what's important in life" and where "loving hospitality is the goal." He points out that this has been done successfully by the church in Colorado Springs, Colo., where readers of a local paper have voted it "Best of the Springs" seven years in a row. The shop's motto is, "Fresh coffee, ancient wisdom."

Kuolt has had some surprising brushes with some famous names. In Seattle, he had the same guitar teacher (Jim Day) as did Jimi Hendrix, though he and Hendrix never crossed paths. He could have gotten in early on Microsoft because of a connection to Bill Gates. Had he decided to practice dojo martial arts, he would have studied with Bruce Lee. Plus, he presented seminars in the 1970s with the scholar Joseph Campbell. Kuolt glosses over these tidbits as he easily shifts to other subjects that come fast and furious during our conversation that stretches well into a second hour.