'Oliver!' is at The Door | Culture Features | Bend | The Source Weekly - Bend, Oregon

'Oliver!' is at The Door

Central Oregon hosts some exceptional events over the winter months, and community theaters can provide a memorable element of entertainment for all ages. Case in point: "Oliver!" the classic Charles Dickens musical, opens Friday and continues through next Saturday at The Door in Sunriver.

Sunriver Stars founder and artistic director Victoria Kristy felt audiences would enjoy learning a little about the story's history, so she decided to write in the role of the playwright, Charles Dickens. "The scene opens with the overture. Then the vendors come out and mingle, then they all freeze and Dickens walks out in his Victorian attire and tells the audience about his life in Victorian England, and why he wrote the story to tell about child labor," she explains.

Dickens was an advocate for fair treatment of the poor and disenfranchised. At age 12, in 1824 England, his family was imprisoned after his father became unable to pay his debts. As an adult, Dickens worked as a clerk in legal courts, gaining an understanding of class bias in the legal system. Those experiences formed much of the inspiration for his best-known stories. In the musical, based on Dickens' Oliver Twist, the young orphan (Talon Confer of La Pine as Oliver) escapes mistreatment and hunger and takes up with the iconic, charismatic street thief, Jack, the "Artful Dodger" (played by Saydi Miller), sharing and surviving many suspenseful misadventures before settling into a stable home.

Kristy has been a lover and creator of dramatic theater since she was a child, she says, starting in fourth grade when she would set out chairs on her front lawn and sell tickets to her variety show. Kristy performed with a childrens theater group in college and began directing childrens theater shortly thereafter. "Childrens theater was the majority of my career," she says.

It was after she moved to Sunriver several years ago that Kristy decided to open her own community theater. "It was 2011 when I had artist friends come down from the Bellevue/Tacoma area. We were doing some workshops and I said, 'What I really want to do is start my own community theater.' They looked at me and said, 'Victoria, just do it!'"

Kristy contacted the American Association of Community Theatre and they sent her all the information she needed. She chose a name that reflected Sunriver's reputation for "a vast sky of stars at night," she says, Her son-in-law created a logo and Kristy placed an ad in the local paper.

"Our first show was in 2012. It involved children because that's what I was familiar with, but now I had my new age group, so we joined together." The multi-generational group performed The Bremen Town Musicians. "It wasn't too terrific," she laughs. "Our heart was in the right place. But we had no lights, no sound, and any props or costumes we had were just things we found in our closets." 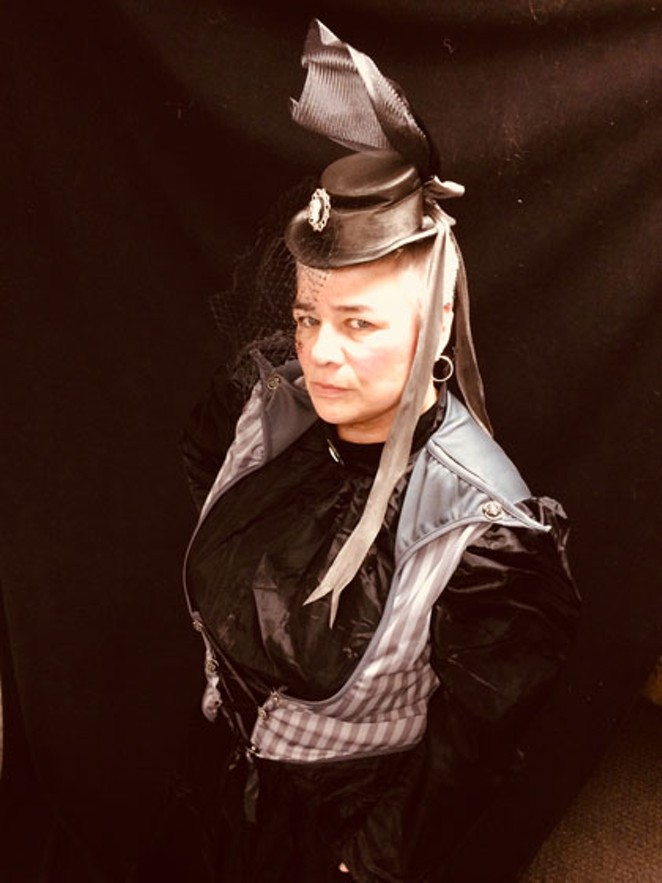 Stars was able to use SHARC for performances before the venue formally opened, but once SHARC started booking weddings and other large events, they had to start paying rent. They used funds previously set aside for workshops and childrens programs, but they began searching for a new home.

"One day we met the pastors at the church in the Sunriver business park. They had just bought a building and they heard we were looking for a space. The pastors at The Door welcomed us with open arms," Kristy says. The Stars have been performing there ever since.

"Oliver!" is suitable for all ages, with parental discretion. "The show has violence," Kristy explains. "Nancy (Ginger Emrick) gets killed. Sikes (Robert Perrine) gets shot by police. All those kids working in the poor house, only being given gruel, running around the streets stealing so they can have some food—those things were happening in Dickens' lifetime." Kristy hopes the special introduction by Dickens (portrayed by Frank Brocker) will help place those elements of the story in context.