On His Own Planet | Sound Stories & Interviews | Bend | The Source Weekly - Bend, Oregon

On His Own Planet 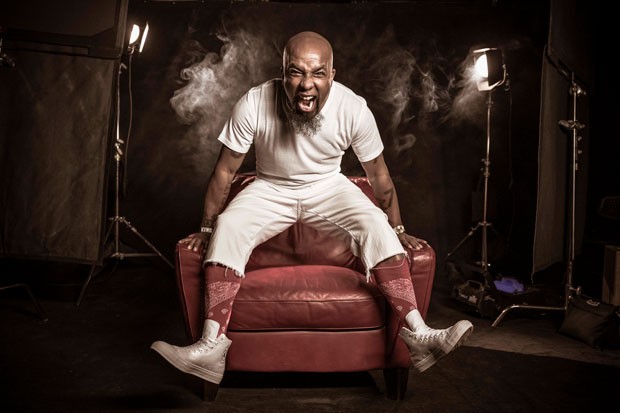 In early 2017, Tech N9ne had what sounded like a pretty far-out idea for his next album, to be called "Planet." In an interview at that time with this writer, he said he wanted the album to be made up of a single piece of music inspired by Billy Joel's epic song, "Scenes from an Italian Restaurant."

That idea fell by the wayside, but Tech N9ne still pursued a far-out idea for his newly released album, "Planet"—creating his own world, which he calls Planet Pyune, where one can escape from an earthly reality that has grown too frustrating to inhabit.

"It kind of morphed into its own thing after I left this planet spiritually and mentally," Tech N9ne said about the concept for "Planet." "I couldn't pay attention to too much down here because it was so disheartening, you know what I mean, with watching the news and seeing what was going on in the world. So I had to leave, and it took a form of its own and it changed into like its own planet and like nothing else."

It wasn't just the problems of the world that had Tech N9ne yearning to mentally travel to a world of his own creation. He had gone through a dispute with a start-up label that wanted to call itself Strainge Entertainment, a name far too similar to that of his own label, Strange Music.

"We won the case and they changed the name," Tech N9ne said. "But I still had to get the song out of me."

One other big source of frustration was the indifferent response to his 2016 album, "The Storm." Tech N9ne still struggles to understand why that album didn't resonate with fans.

"Some say that the people I chose to work with were people we grew up liking, and the youngsters don't really care," Tech N9ne said. "I don't know, man. I don't know. I don't know."

"The Storm" is one of the few setbacks Tech N9ne has encountered since forming Strange Music with Travis O'Guin, and his 1999 debut album, "The Calm Before the Storm." ("The Storm" was actually meant as a sequel to that first disc.)

In the 19 years since, Tech N9ne has become the leading indie rap artist on the scene, with a catalog of a dozen solo albums and another eight "collab" albums, on which he has worked with other artists (including many from the Strange Music roster) in writing and recording tracks. Meanwhile, Strange Music has grown into a highly successful label with more than a dozen acts.

"It's a place you can go mentally, and this place has more love than Earth and (less) hate, because hate runs it (on Earth). It has togetherness and not separation, like this Earth," —Tech N9ne tweet this

Tech N9ne considers Strange a label where music becomes medicine that, in his words, navigates listeners through the world of darkness. That description mirrors the purpose of "Planet's" alternative world of Pyune.

"It's a place you can go mentally, and this place has more love than Earth and (less) hate, because hate runs it (on Earth). It has togetherness and not separation, like this Earth," Tech N9ne said. "It's just a place of love and understanding each other, man. That's what Pyune is. It stands for peaceful youth unit neutralizing Earth."

Those themes of love and unity filter through many of the 19 songs on "Planet" as Tech N9ne raps his way through a varied musical soundtrack that ranges from the EDM-ish "Fresh Out!" and "Don't Nobody Want None" to edgy jams like "Comfortable" and "Habanero," to an epic track, "Brightfall," whose elaborate production would make Queen proud.

Unlike "The Storm," Tech N9ne said early reaction to "Planet" has been overwhelmingly positive.

"They (fans) actually dig all of the songs," he said. "It made me feel good that the rapport from the fans is, 'This is your best record.' I'm like, 'Woah, this late in the game.' I'm talking about only four more years and I'm doing my best record."

That mention of four more years refers to Tech N9ne's plan to gear down his own career in another four years, as he hits age 50.

"It don't mean I won't tour anymore, just not as much, you know what I mean, and I'll focus on building this label all the way up," he said.

For now, there's an extensive tour to do, with a show that will include the return of Tech N9ne adapting his characters the King, the Clown and the G, and a setlist that will include plenty of fan favorite songs. And this outing comes after "Planet" was released, allowing Tech N9ne to also feature new songs in the show. In the past, he has generally debuted new songs on tour before they were released on an album.

"I think this is really going to be a good show," he said. "The fans are going to love this one."