On the Ascent | Outside Features | Bend | The Source Weekly - Bend, Oregon 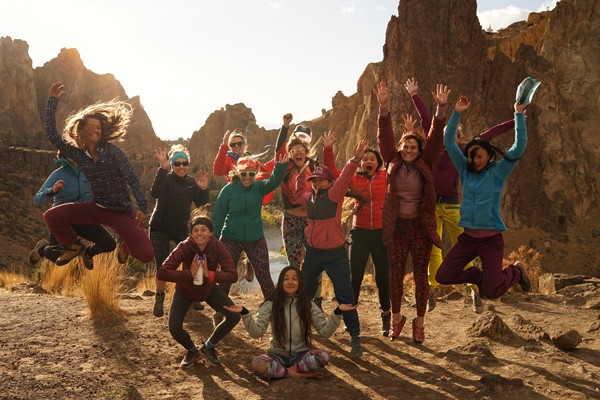 "See a need, fill a need" seems like a common sense approach to starting a new business. Yet Lizzie VanPatten, co-founder of She Moves Mountains, knew it would take more than her belief in the need for better female representation in the climbing world to get her passion project off the ground. Given the chance, women would have to show up.

VanPatten graduated from Western Washington University in 2014. After years of struggling with depression and identifying as a student, she found herself unsure of where her life was headed. She began embarking on challenging hikes and eventually decided she wanted to climb Mt. Baker. To achieve her goal, she signed up for a 10-day mountaineering course where she was the only woman.

A sense of pride washed over VanPatten when she did the summit. Her life's purpose crystallized as she sat on the mountaintop and realized her passion for the climb and her desire to become a guide.

VanPatten received a scholarship designed to increase women's participation in guiding, enrolling in a course where she was again the only woman. It wasn't until her first day on the job that she met another female guide—Carey deVictoria-Michel—who eventually became her partner in forming She Moves Mountains.

Recognizing the need for more women to have access to climbing, VanPatten and deVictoria-Michel immediately started working together to create women's clinics. "Our boss was amazing," says VanPatten. "He let us run our own clinics and create our own curriculum." The response was more than they expected.

VanPatten and deVictoria-Michel decided they wanted to create a space for women to feel empowered through instructional rock climbing clinics. Even with their initial success, VanPatten admits that striking out on their own to create She Moves Mountains was intimidating.

The women launched an Indiegogo campaign to raise money to purchase the basic gear needed to teach women to climb. Their hope was that by providing the gear and pricing their clinics affordably, more women would be able and willing to give climbing a try.

"Getting into climbing is a pretty intimidating endeavor to take on," says VanPatten. "It's scary to sign up for something you know nothing about. It's scary to trust your life to a rope. We wanted to minimize the fear of the risk of losing a bunch of money as well."

She Moves Mountains successfully launched in July with its popular Women's Intro to Climbing Clinic, providing eight hours of instruction, gear included, for $105. Students only need to bring their own water and food for the day to get started.

Open less than a year, She Moves Mountains has already grown and now offers six progressive clinics designed to get women climbing on their own. In an effort to continue to serve underrepresented populations in the climbing world, they now have a program that provides a monthly scholarship for women of color interested in climbing, and they hope to have more opportunities available in the future.

While most of She Moves Mountains' clinics focus on empowering women through climbing, it has multiple retreats designed to help rejuvenate, as well as one called Wild and Weightless Climbing Weekend that combines climbing and wilderness therapy to address body image issues. "The idea is to appreciate our bodies for what they are capable of," says VanPatten. "Instead of focusing on what they look like, we concentrate on feeling grateful for our body's power."

Women curious about the sport can get a taste of the offerings there, and at the next Intro clinic in April. Clinics are also held throughout the year in both Oregon and Washington.

See the full list of events for the Outdoor Women's Fest and the Bend Women's March at bendwomensmarch.com