The wildfire season may be over, but that doesn't mean the Bend Fire Department isn't keeping busy. Every year, firefighters run ice rescue drills to practice rescuing individuals and pets trapped after falling through thin ice. On Feb. 8, Bend Fire crews ran through ice rescue drills at Shevlin Pond in Bend. Battalion Chief Dave Howe says the fire department receives anywhere between zero and four to five calls a year for people and pets trapped in ice. While that may not seem like very many, he says even one can be devastating.

"We see a lot of footprints on the ice over the winter—people go out there a lot," said Howe. "The river is much more dangerous, because the current keeps the ice thin." 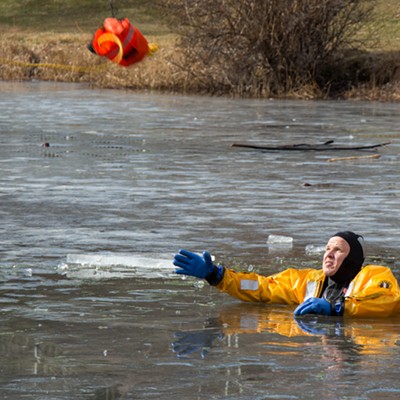 Howe says the best course of action after falling through the ice and failing to get yourself out is to conserve your energy and call for help. Keep your body compact to conserve as much heat as possible. Focus on breathing, stay calm and listen to instructions from rescuers. If you witness someone fall through the ice, whether human or animal, don't put yourself in danger by walking on the ice in an attempt to rescue them. Take note of where they fell in and call 911.

"The person hanging on the ice shelf is not going to die instantly; they have a little time," says Howe. "So the people on shore would be better occupied with making sure the rescuers have easy access to the bank and a clear view of the situation."