The May primary is not far away. Will we soon get to meet the Democrats running for Greg Walden's seat?

For the first time in over two decades, voters in the 2nd Congressional District of Oregon can be sure they will elect a new person to represent them in the U.S. House, following Rep. Greg Walden's announcement that he would not seek re-election. Walden, who first won the seat in 1998, has been the target of much scrutiny by some constituents for, among other things, holding precious few town halls and for meeting only with select groups when he does visit his district—prompting some to exclaim "Where's Walden?" on a regular basis. 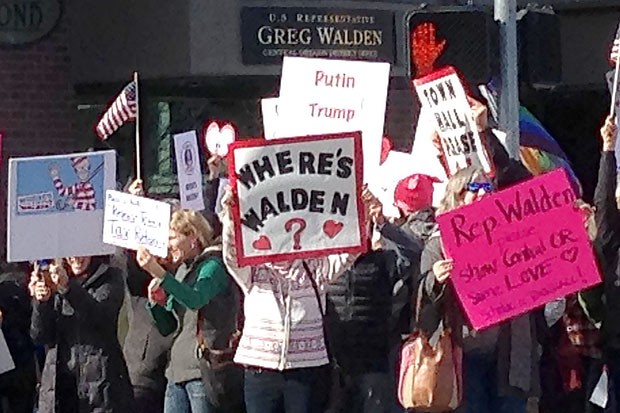 But ahead of the May primary and November elections, when voters will decide who wins that race, it's becoming clear that we should also be saying, "Where's the Dem?" Looking at where things stand right now, Democrats may be running out of time to introduce themselves to voters in this vast district ahead of the May primary election. According to candidate filings from Oregon's Secretary of State, eight Republicans have filed to run in the race—including three candidates who hold or who have held positions in the Oregon State Legislature. The eight Republican candidates' listed occupations include Mark Roberts, a business owner; Jason Atkinson, former state senator and business owner; Cliff Bentz, current state senator and attorney; Knute Buehler, a physician and former state representative, David Campbell, a project manager with an MBA; Jimmy Crumpacker, an investor; and Kenneth Medenbach of the company Chainsaw Creations.

Meanwhile, five Democratic candidates are running thus far, including John Holm, who lists "currently disabled" as his occupation, with past experience as a broker; Nick Huertz, a retail store owner; Jack Howard, an attorney and Union County Commissioner; Alex Spenser, a former campaign strategist and writer; and Isabella Tibbetts, a community organizer and restaurant server.

Thus far, none of the Democratic candidates have visited, called, sent a press release or have otherwise publicly made their presence known here in Deschutes County. Republican candidates including Buehler, Bentz and Crumpacker, meanwhile, have all sent out numerous campaign-related documents—all three, with commentary railing against the current impeachment trial against the president. Crumpacker, who lives in Tumalo, wrote in a Jan. 15 release, "I'm glad this sham impeachment will die a quick death in the Senate."

In a Dec. 18 press release criticizing partisan politicking, Buehler, of Bend, wrote, "Nancy Pelosi and D.C. liberals have been obsessed with pushing through a partisan impeachment effort"—basically calling out partisanship with more partisanship.

Is this what we can expect in this race going forward: Raging about national politics on one side, and crickets on the other? Voters of the 2nd District deserve far more.

In 2018, Democrat Jamie McLeod-Skinner ran against Walden—and while she didn't win, she did beat Walden in Deschutes County, and garnered many votes in other counties whose constituents historically vote red. McLeod-Skinner told the Source she believes her success in garnering so many votes—145,298 versus Walden's 207,597—laid in meeting personally with so many groups and individuals, and in listening to their needs. McLeod-Skinner said she spent about six months in 2017—a year and a half before the November 2018 election—traveling around the district to get more information about what voters wanted and needed. She then spent close to a year campaigning (and fundraising). Who are the candidates making similar efforts now?

McLeod-Skinner's effort was what was necessary to get even within striking distance of beating a Republican in a district that, as of December, had 143,427 people registered as Democrats, 189,833 as Republicans and 201,993 non-affiliated.

Voters were "hungry for someone who shows up and listens," McLeod-Skinner—who's now running for Oregon Secretary of State–told the Source Tuesday. She also admitted that some candidates may be "daunted by the scale of the (CD2) race."

While the the massive size of the 2nd District (which encompasses all of Oregon east of the Cascades as well as Medford) can be daunting, if Democrats hope to win this race, voters should be seeing more effort by now. Going up against an incumbent can be daunting; yet McLeod-Skinner's effort last time around should have given some Democratic candidates heart that the race could be won.

When primary season comes around for either the "R's," "D's" or "I's," constituents in the 2nd District should hear a robust debate about both national and local politics from all sides of the political spectrum. The lack of an experienced, viable candidate ensures that voters will be treated to inflammatory press releases and media coverage with no balance and no rebuttal. Not a great way to go through the elections season or to find the best representative to go to Washington, D.C.

The race for who will represent the 2nd District is far from over. However, the time is now to ramp up the efforts for candidates to get to know the district—and for the district to fully know them.