"I'm excited about this year's offerings," said Corinne Handelman, ONDA engagement manager. "The goal of the series is to take a deeper look at the High Desert, which is a vast landscape filled with all sorts of interesting subjects for folks to learn about."

The series moved to a virtual format due to COVID-19, but Handelman sees the positive in that situation. "The virtual series reaches not only locals in Bend and Portland but also folks beyond Oregon. Our audience has expanded tremendously with over 1,000 registering for each event." The virtual format alleviates capacity issues at venues where seats are always in high demand. Handelman also pointed out that the recorded programs will be captioned, allowing folks to view the program at a later date, as well as making it easier for those with any hearing impairment. 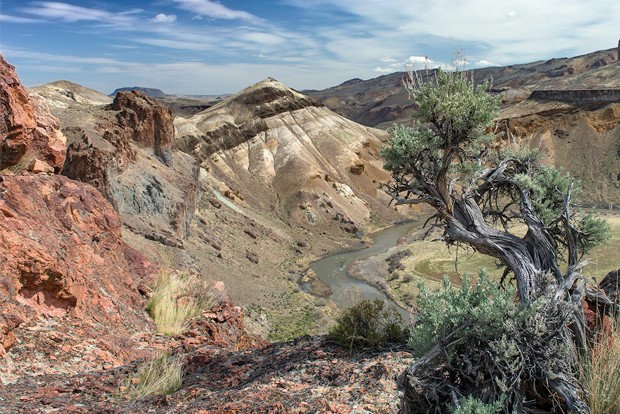 "Reclaiming Conservation" with documentary filmmaker, podcast host, and long-distance runner Faith E. Briggs will kick off the series Feb. 15. After a screening of her short film, "This Land," which documents Briggs's awakening and connection to public lands issues through a cultural lens, there will be a Q&A session led by Handelman, the series' host. "We'll use some of the behind-the-scenes stories from the filming to talk about the learnings from making a film about public lands and experiences in the outdoors, in general," said Briggs. In 2015, Briggs started working for the Discovery Channel in the documentary department, programming environmental films. "When I started that, I didn't consider myself to be a conservationist. I just thought that conservation was something that people who were concerned about protecting plants and animals did," said Briggs. "I didn't have that luxury of being able to focus on that as a Black woman coming from a community where social justice has always been front and center."

During that period, she reviewed many films coming from communities of color, and it hit her those societies were on the front line of environmental calamity but were often not included in the conversation, for a wide variety of reasons. "Our lack of presence was only making us more vulnerable to what was going on and from that, I felt like I really needed to be involved in conservation conversations," added Briggs. She's also helping to define conservation language. Words such as "public lands" or "wilderness" have a connotation that aligns more with policy and may be considered disingenuous to certain populations. Food for thought and inspiration for conversation.

Meanwhile, award-winning photography, author, and Ph.D. geologist Ellen Bishop will present "Small Splendors, Vast Landscapes" on Tuesday, March 15. Well known for her book, "In Search of Ancient Oregon: A Geological and Natural History," Bishop has been an advocate for the beauty and mystery of the High Desert landscape for many years. As a geologist and photographer, Bishop believes people need to look at places at all scales to understand them.

"As a geologist, I can look at an entire landscape and have a feeling for the geologic history of an area, but then I need to look closer at the details in those rocks to understand their origins," said Bishop. It's easy in the High Desert to be overwhelmed by the sheer scale of its vastness or its dramatic history of massive floods or volcanic eruptions. "I want to talk about these vast landscapes which are composed of all the little details such as macrobiotic crusts or the texture of the rocks, things that are important to understanding these places," she said. The micro is easy to miss in the vastness of the macro landscape.

Then on April 19, Arthur Middleton, assistant professor of wildlife management and policy at University of California-Berkeley, will share "Wildlife Migrations in the West." Middleton will bring into focus migration patterns of western wildlife such as pronghorn and mule deer, and the barriers these creatures face along their routes such as roads, fences, traffic patterns and land-use changes. Middleton will also highlight collaborative conservation actions and opportunities.

Registration for each live-streamed program will open one month before the presentation date (and close two hours before the event) on the ONDA website. Registrants will be provided with a Zoom link an hour before the program begins at 5:30 pm. A captioned recording of the presentation will be made available to those who register for the event.