A trio of surf lovers takes river cleanup to the next level, exploring the underwater world of the Deschutes

"I grabbed this baby head... not a real one!" says Kea Eubank as we stand at the edge of the water in Pioneer Park. Apparently that's just how it goes when you dive under the Deschutes River; you never know what you're going to get. Hell, the trio called @lootthedeschutes on Instagram found an actual gun the night before we met.

"We were really surprised. We thought we were going to find a gun a few times," Miranda Campbell tells the Source Weekly. "We dive some deep spots and we ended up finding it in the shallowest area yet. It was the last thing we found!" 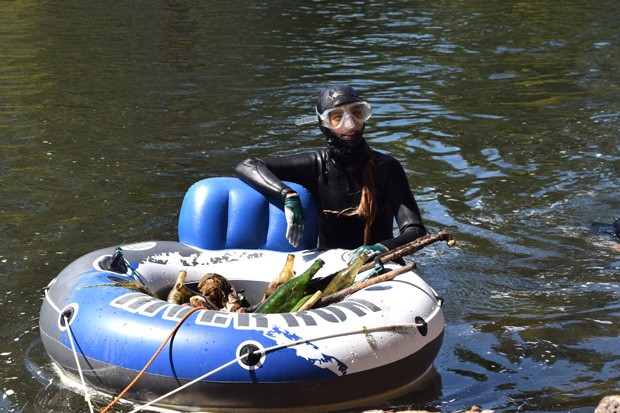 Made up of three friends including Eubank, Campbell and Lled Smith, Loot the Deschutes only started posting on Instagram in April (after moving on from Craigslist as their main platform), but they've already made an impact on plenty of lives. What do they do? Well, exactly what the name reads. The three throw on wet suits and dive underneath the water, collecting trash or possible belongings. It's like a giant lost-and-found box—just with more water.

"We all surf the park and we'd lose our fins—I'd walk by and be like, 'there's sunglasses in the water!'" says Smith, who happens to be wearing a pair of fresh Deschutes-found shades. "So, I just started snorkeling and finding sunglasses and other items."

Campbell and Eubank used to literally swim the river instead of float it, so they just ended up bringing snorkels along, and the team was formed.

These guys are the people to reach out to if a valuable gets dropped below. The quicker you let them know it entered the water, the better, because once it sits for a while the river can be unpredictable. Or you can check out their Instagram feed and you might find your long-lost Crocs. They find a lot of stuff; everything from phones, speakers, clothes and even wedding rings.

"My first ring was a 40th anniversary from a lady's late husband. She'd dropped it—it had been sitting for six months. And I found it in the winter," says Smith of the 68-diamond ring. "She said if she ever comes back [to Bend] she's going to buy us all pizza—all the surfers!"

Smith isn't the only one finding rings, either.

"Mine was a girl. I think her dad gave her the ring the week that he passed away," says Campbell.

"Forty-six years of marriage, it was their ring. It was a gold ring. It was SO big–it was like three rings in one," Eubank says of his find. 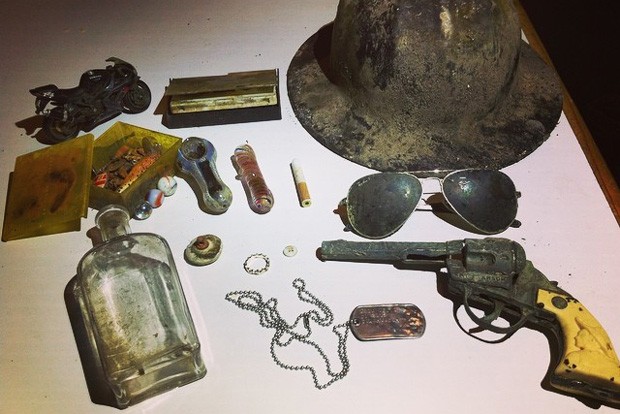 Some of the most common things the group finds are cans, bottles, keys, tube ties and sunglasses. Not all of the trash is new by any means; it's clear some of the items have been there for years. Unfortunately, this exact thing is something the Bend Park and Recreation District warns about when partaking in river recreation. Its reminders include ensuring belongings are properly secured; if you don't need it on the river, don't bring it. BPRD also reminds people they shouldn't be sinking cans or bottles in the river—or even bringing glass along in the first place.

I watched the team fill up an entire tube in just a 20-minute session at Pioneer Park, with most of the findings being glass bottles. So not only are they finding people's belongings, Loot the Deschutes is cleaning up the river and having fun while doing it.

"I honestly think like 90% of it is on accident," says Campbell. "I truly believe people are kind of aware. There is a lot of stuff down there but there are definitely condensed areas. For the amount of traffic, it's not as bad as you would think."

One thing that Loot the Deschutes wants to make aware is that while they think it's great kids and people are getting behind them, they don't want to influence anyone into trying this without the right skillset.

"There's crazy stuff down there," says Smith. "Giant rocks with holes in them—I saw this piece of wood with nails sticking out of it [a rock] that would have just latched on to you."

Other dangers the group mentions are getting stuck to a lure, stuck under a rock, cut on glass and the overall power and unknown of the river. But that's also why it makes what the group does extra important—because they continue to make the river safer for the rest of the people using it.

The team's finds are starting to accumulate, to which Campbell jokes has been like a museum for friends and family who come by the house. For things no one claims there's the question of what to do next.

"We're considering making art out of some of the old items that have been river-weathered," says Eubank. "We're not throwing things away."

"Other than the 'real' garbage," chimes Campbell.

Some of the weirdest finds (other than the Smith & Wesson handgun) include a pet dog's urn, a stolen purse from the '80s with ID and makeup preserved, old computers, crutches and more– so it makes sense when Eubank tells me that it's "like a time capsule down there."

Smith compares the feeling of searching the river to walking along and finding a $20 bill or other random item on the sidewalk.

"It's just exciting!" Smith says while overlooking the water. "It's a totally different world—an underwater world."