One Will Do, Thanks | Local News | Bend | The Source Weekly - Bend, Oregon

One Will Do, Thanks

For kids at Pine Ridge Elementary, two wheels are hardly a challenge. Enter the formidable unicycle 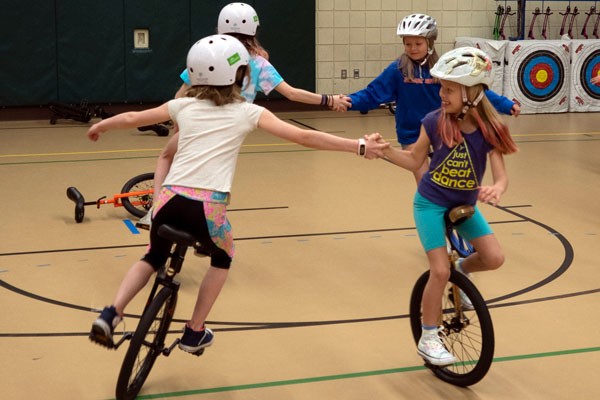 Most people can remember what it was like to learn to ride a bike. The skinned knees. The crying. In some cases, a mild concussion.

But imagine learning to ride a cycle twice your size, with only one wheel.

That's exactly what 78 students at Pine Ridge Elementary do four times a week before school, in a club led by physical education teacher Carisa Thompson. The youngsters ride around the gym like a grade-school version of "Waterworld," avoiding not just each other, but also the kids in before-school daycare and the obstacle courses set up by the advanced riders.

"The unicycle club has been great for kids of all abilities," Thompson told the Source. "Once they can ride, they are filled with confidence and pride, having accomplished something that is difficult and not something a lot of people can do."

Thompson started the Pine Ridge Unicycle Club in 2009, when students asked her to teach them how to ride, and when then-10-year-old Owen Smith created a Kickstarter campaign to buy one unicycle. He ended up raising $720 in two weeks and was able to buy nine unicycles with the help of local bike shop, WebCyclery. Now, the club has so many bikes that they occupy the hallway in the gym's storage area—and they all get used.

The club is open to kids in grades 3 to 5, but Thompson said younger students are welcome, if they can bring their own equipment.

"If you are in K to 2nd, you can join if you have your own unicycle," she said. "The reason being, I don't have enough unicycles or space if the kids from every grade did it." 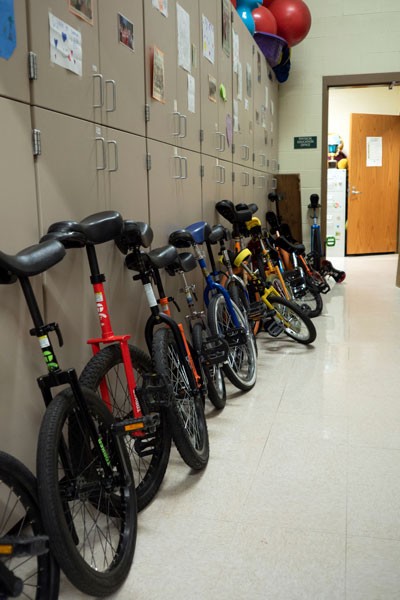 The riders advance according to the standards set forth by the International Unicycling Federation. Freestyle Level 1 riders, for instance, need to be able to mount the unicycle unassisted, ride 50 meters and dismount gracefully with the unicycle in front of the rider.

When the Source got to watch the intermediate class recently, kids were riding unicycles over twice their size. Some were stacking mats like stairs, hopping their unicycles up each mat, then jumping off the top and riding off backwards. One 5th grader rode his unicycle backwards across a plank between two mats, then gracefully jumped off the end—to cheers from his friends.

The riders also show off their skills around town, Thompson said.

"We usually do the Bend Christmas Parade," she said. "In the past, we have ridden in the Earth Day Parade, [and] we usually do a group ride in the Old Mill at the end of the school year."

The IUF has 10 levels. The more advanced a rider gets, the more mounts he or she is required to master, as well as the fun stuff: tricks.

"You get on with the unicycle tilted, and then you step on... you wrap your leg around it and ride," DeGraff said, smiling.

Thompson said in the nearly 10 years she's been teaching the unicyclists, the school has acquired 38 unicycles, some purchased with a grant she received from the Education Foundation for Bend-La Pine Schools. She's also purchased bikes out of her own pocket, as well as receiving a few donations.

DeGraff said he's the only unicycle rider in his family, but he's got mad skills already, and lofty aspirations, he says, to "Maybe someday be a professional."