Opening the State: When's the Date?

April 14, 2020
1 comment
Gov. Kate Brown called a press conference Tuesday to introduce a framework for re-opening the economy—one based on “science and facts,” she said.

But, those looking for a solid end date or an exact metric that would signal that the coast is clear left disappointed. 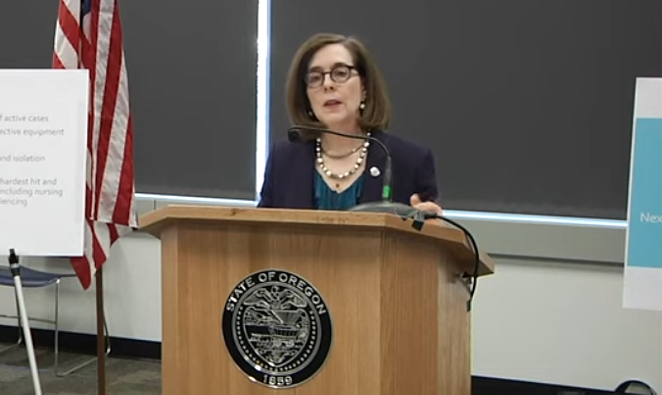 Instead Brown outlined a number of “prerequisites” that must be achieved before easing stay-at-home orders:


“While we have to be careful, we also cannot stand still,” Brown said. “We all know this is a global problem and leaders across the world are struggling with how to approach this…. A shuttering of the economy at this scale has never happened before.”

Moving forward, Brown said she will work with leaders across the state—as well as public health experts—to define best practices for different industries including restaurants, retail operations and beauty salons. This could include additional guidelines for how services are delivered: More PPE requirements and Plexiglas dividers at the register were a few examples.


It will be slower than anyone would want. - Gov. Kate Brown tweet this

After the last Great Recession, recovery throughout the economy was uneven, Brown said. People in rural areas and people of color did not necessarily bounce back.

“Our efforts at re-opening Oregon must reflect this reality," Brown said. "[We will] get Oregon back to work in a smart and deliberative fashion that keeps us moving forward instead of moving backward. It will be slower than anyone would want.”


Concrete numbers and plans? Not now.


Members of the press pushed for more details during the briefing: How much PPE will the state collect before re-opening the economy? How many days without COVID-19-related deaths does Oregon need to have in a row? Brown declined to provide exact numbers, but said Oregon is using its own framework that is still in development.

Dr. Dean Sidelinger, the state’s epidemiologist, said Oregon needs to ramp up testing and contact tracing, but did not provide exact details on what the state is doing to reach these goals.

Brown said that adults in custody in Oregon jails have been making masks at a rate of 3,000-4,000 a day, and other Oregon companies have also made the switch to producing PPE which is increasing the overall supply statewide.


As announced Monday, Brown plans to coordinate the release of stay-home orders with Washington and California and is working with Gov. Jay Inslee (D-Washington) and Gov. Gavin Newsom (D-California) on guidelines. But that doesn’t mean Oregon’s restrictions will lift on the same day as the other states. Currently, Brown has not set an end date to the state’s stay-at-home order, though Washington’s is scheduled for May 4.

The leaders of the three West Coast states have received praise from epidemiologists and East Coast media outlets for their early action and overall handling of the crisis—especially compared to the delayed action that caused massive infections in epicenters like New York City. All three West Coast states donated extra ventilators to cities on the East Coast. As of April 11, New York had 8,627 COVID-19 related deaths, compared with 598 in California, 483 in Washington and 48 in Oregon, according to The New York Times.

Brown issued the “Stay Home, Save Lives” order on March 23, the same day as Washington, and four days after California.