Deschutes County expands eligibility requirements and speeds ahead with vaccinations, while Oregon still lags behind other states

On April 5, frontline workers and their families, people over 16 with underlying health conditions and people living in multigenerational homes become eligible to get the COVID-19 vaccine in Oregon. Deschutes County was one of 23 counties, including Crook and Jefferson, that expanded eligible groups ahead of the state.

After gaining approval from the Oregon Health Authority, St. Charles Health System began sending invitations on March 31 to newly eligible Central Oregonians who pre-registered at centraloregoncovidvaccine.com. Last week, 3,000 members of this group—deemed "Phase 1B Group 7" in the state's vaccine rollout—received their first shot at the Deschutes County Fair & Expo Center. 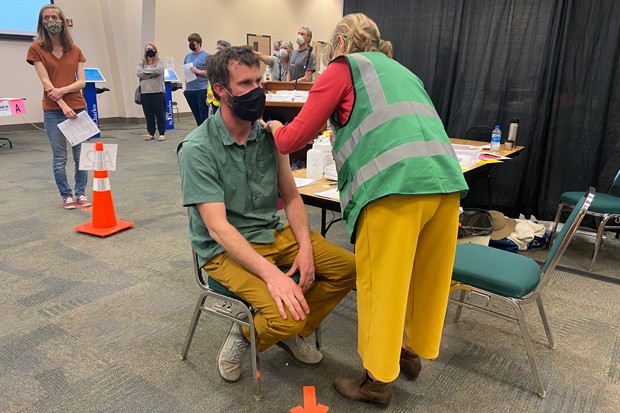 In order to start vaccinating this group early, counties had to have available appointment slots and have made sufficient attempts to invite already eligible groups to get the vaccine. According to Morgan Emerson, a Deschutes County spokesperson, the county had sent invitations to all 8,844 people who were pre-registered from the previous group, Phase 1B Group 6. When they still had available appointment slots, they expanded to vaccinate Group 7.

"We'd felt we'd done quite a bit of communication out to our community, encouraging people to pre-register over the past two weeks, to make sure that everyone who is interested is able to have that opportunity," Emerson said.

Group 6 became eligible for the vaccine in Deschutes County March 22, a week before they were eligible statewide. This group includes adults ages 45 to 64 with underlying health conditions, individuals experiencing houselessness, people living in low-income senior housing, pregnant people over 16 and some frontline workers, including migrant and seasonal farm workers, wildland firefighters and food processing workers.

Now, all frontline workers, defined by the Centers for Disease Control and Prevention, are eligible to get the vaccine, along with any family members living in the same household. The state also expanded what is considered an underlying condition, in line with CDC recommendations, including current and former smokers, people who are overweight instead of obese and Type 1 diabetics. 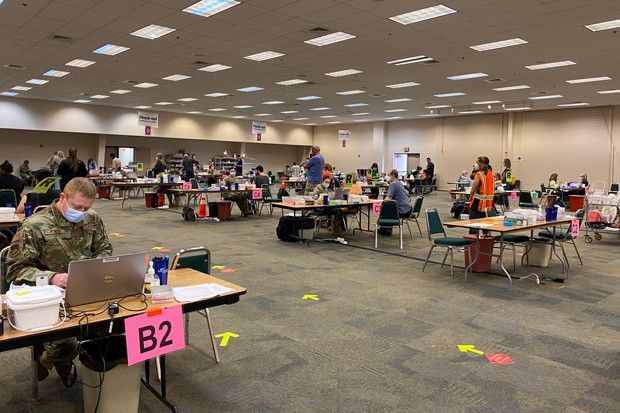 Central Oregon will still prioritize giving vaccines to previous groups if they pre-register online. Emerson said, for example, if an 80-year-old registers, they will be prioritized over frontline workers.

"It's been an effective way to make sure that community members have an easy place to go and aren't needing to scramble to grab a spot online at a certain time," she said.

As of press time, Oregon had vaccinated over 1.25 million people, ranking 33rd in the country in the percentage of the population that has received at least one shot (31%). This is a percentage point behind the national average. Both California and Washington rank above Oregon, giving at least one dose to 34% and 32% of the population, respectively.


Oregon officials have attributed the shortcoming to inequities in the vaccine allocation process. According to Oregonian/Oregon Live reporting, Allen directed the governor's office on March 28 to "start raising a ruckus" over the apparent inequities. Officials subsequently contacted the CDC and the Biden administration to get a better understanding about why Oregon's doses per capita seem to be falling short, but have yet to release more information.

"Oregonians should know that we will move heaven and earth to make sure that we are getting our fair share," Gov. Kate Brown said at last week's press conference.

All Oregonians 16 and over will be eligible for the vaccine statewide starting April 19, Gov. Kate Brown announced on April 6.

"We may need to temper our hopes of having enough doses to vaccinate all Oregonians over 16 by late May and bump that expectation back a couple of weeks," Allen said.

Both California and Washington recently moved up their timelines so all residents 16 and over become eligible on April 15, four days ahead of Oregon. In Idaho, the general population became eligible on April 5. Brown explained that Oregon is waiting longer to make vaccines available for the general population in order to first prioritize vulnerable groups and center equity in the state's vaccine strategy. The state is relying on work by its COVID Vaccine Advisory Committee, which advised OHA on its vaccine sequencing plans and aimed to ensure the communities most affected by COVID are included.

"We know that communities of color have been disproportionately impacted by the pandemic," Brown told reporters. "(Group 7) is more diverse, and we want to make sure that these vulnerable Oregonians get access to the vaccinations and are prioritized in our vaccination strategy because they're more vulnerable to the disease."

The push for vaccine equity

So far, the state has failed to proportionately vaccinate Latino Oregonians in particular, compared to white residents. Six percent of the state's shots have gone to the Latino population, which makes up 13% of the population and over 25% of COVID cases statewide. This is an improvement from March 10, when only 4% of the state's shots had gone to Latino communities.

Oregon health officials hope to combat these inequities through federally qualified health centers, often connected with communities of color. On March 5, the state granted these health centers the flexibility to vaccinate all of their patients, regardless of age. 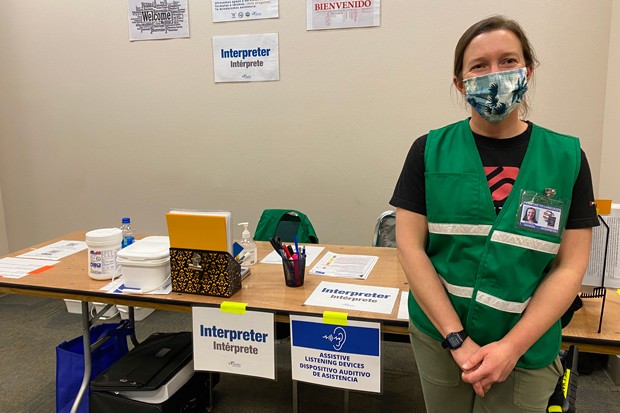 One of these health centers, Mosaic Medical, serves patients across Central Oregon and has gone beyond state eligibility requirements to vaccinate people with limited English proficiency, people who are low income and people identifying as a member of a minority population. Their vaccine supply is limited to a couple hundred doses a week, so only their patients and people signed up through partner organizations are given slots.

But they could see more doses soon. As a part of the federal government's equity strategy, Mosaic Medical was invited to receive more shots and is set to receive over $4 million from the recently passed American Rescue Plan to support vaccination efforts.

"It's a very specific, targeted effort at people of color, and most people of color in Central Oregon are Latino immigrants," said Brad Porterfield, executive director of the Latino Community Association, one of Mosaic's partners.

Central Oregonians can pre-register to get the vaccine at the Deschutes County Fair & Expo Center in both English and Spanish. Spanish interpreters are available on site, and remote interpreters are provided virtually for all other languages.

How to get the vaccine

Find out if you're eligible at getvaccinated.oregon.gov