Visit the Orchard District and you’re likely to see a colorful sign or two, and among them, a sign that reads, “We love our diverse and welcoming neighborhood”—a sign also visible in Spanish. Orchard is the most racially diverse neighborhood in Bend, with twice as many Black residents, three times as many Latinx residents and more millennials than other parts of the city, according to the Orchard District Neighborhood Association. People here enjoy a close—but not too close—proximity to downtown, a local, neighborhood-y feel and plenty of parks, including the very-visible Pilot Butte, and Hollinshead Park, my personal favorite spot to take the dogs off-leash or to watch the sprawling community garden bloom. Gardeners, take note: Orchard is named for a doomed experiment at turning the area into a commercial orchard, due to its warmer temperatures compared to other parts of town. That commercial experiment failed, but the micro-climate “banana belt” remains. 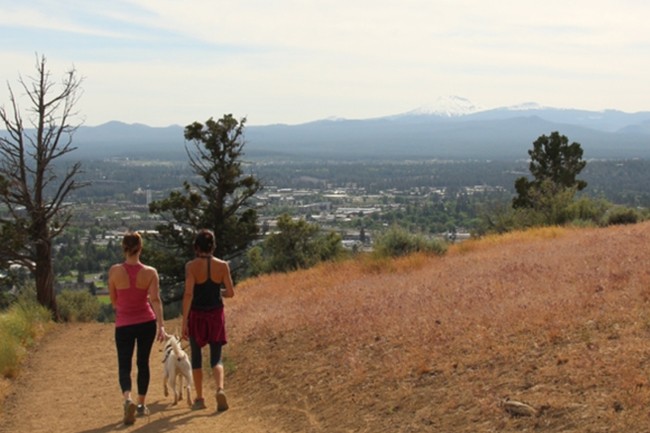 Neighborhood Greenways on NE 6th Avenue and NE Jones Road are places to find the district’s residents walking, biking or otherwise getting out of their cars—a priority for people in the area, according to a recent neighborhood association survey. The recent addition of the food cart pod, Midtown Yacht Club, along with a host of family-owned cafes and shops, make this area feel welcoming, less hustle-bustle and more “local,” in my opinion, than some other parts of Bend. Read: Fewer decked-out Mercedes Sprinters; more VW Westfalias.

Neighborhood / Area:
The Orchard District is located in the central northeast part of Bend, part of the area often referred to as Midtown. The boundaries are generally between Pilot Butte, the railroad and US 97 Parkway, Franklin Avenue, and Butler Market Road.

Who Lives Here:
According to the 2018 census the population in the Orchard District is primarily couples with no children. Median income of 55k.

Reasons Why People Move Here:
Dubbed the most affordable neighborhood in Bend, young couples looking to start their families are attracted to the affordability, older “fixer-upper” homes on larger lots.