Oregon Cleans Up at GABF

The most medals ever at American beer's biggest event 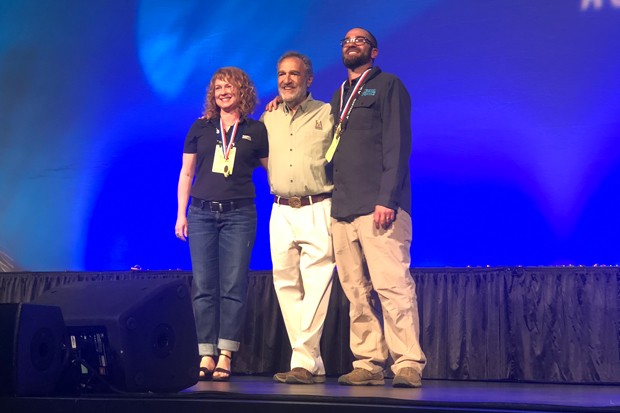 The advertising slogan for the 2018 Great American Beer Festival sums it up better than anyone else could: "4000+ Beers. 800+ Breweries. Mind Blown."

Held by the Brewers Association in Denver last weekend, GABF is a beer fest like nothing one's seen in Central Oregon. Instead of paying for tokens that are exchanged for beer samples, visitors purchase a ticket for one of four sessions (each about four hours long) and enjoy all the 1-ounce samples they can taste within that time. And what a selection! Breweries of all sizes have booths at the show, from the big guys like Deschutes and Widmer to tiny outfits like the Lewis & Clark Brewing Company in Helena, Mont. It's a chance to sample the complete state of American craft beer without having to leave the building—but you'll want to, because nearly every bar and brewery in Denver holds special tappings and other events over GABF weekend.

"There's really nothing you can compare it to," said Ian Larkin, brewer at 10 Barrel Brewing and occasional server at their GABF booth. "I've been going for years, and these days, it really symbolizes how incredibly massive the craft beer movement has become, year after year."

Larkin has another reason to enjoy the festival: The beers he helps make keep on winning awards. Oregon brewers scored 22 medals at GABF—a new record for the state. 10 Barrel won for all three beers it submitted—gold for Passionate Envy (a fruited wheat beer), gold for the Baywindow Berliner weisse, and silver for the P2P stout. Other local winners include GoodLife Brewing for Sweet As, Sunriver Brewing for Fuzztail and Cinder Beast, Worthy Brewing for Strata IPA, and Three Creeks Brewing for Stonefly Session Ale. Hood River's pFriem Family Brewers also had a killer weekend, winning two medals and the coveted Mid-Size Brewer of the Year award, confirming for the world what everybody in Oregon already knew about them.

"There are lots of beer competitions out there," noted Larkin, "but I'd say that GABF and the World Beer Cup are the ones that have the most prestige. You have the best judges in the world and the fiercest competition in the entire country, all in one place. Winning a medal here, and doing it multiple times even, is an incredible honor. It's the feedback we receive at our pubs that matters the most, of course, but getting national recognition like this definitely helps us feel secure that our beer's on the right track."