Oregon is Burning, and the Fires Are Zero Percent Contained

by Nicole Vulcan and Laurel Brauns

September 09, 2020
comment
Damage from this week's wildfires across Oregon could be the largest loss of life and property ever seen from fires.

So far, the many fires—some which have combined to become one mega-fire—are 0% contained.

The cities of Detroit, Vida, Talent and Phoenix have been "substantially destroyed."

Officials have high hopes for tomorrow, when the winds that have pummeled the western slope of the Cascades from Clackamas County all the way to the Oregon-California border are expected to change direction and slow down.

And for those who want to help, the best way to do so right now is to donate to the Red Cross, which is helping the many evacuees—some who have been rescued from dire conditions, like wading in rivers until they could be found.

Those are some of the biggest takeaways from a press conference Wednesday afternoon, hosted by Gov. Kate Brown and fire and National Guard officials in the state. 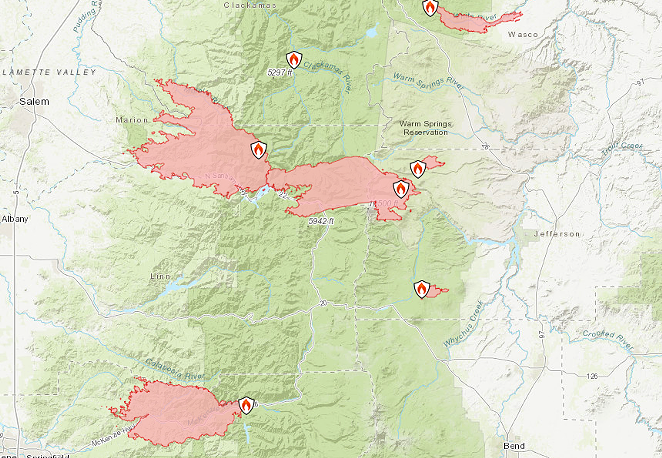 Brown described the circumstances around the fires, some that started Monday, as "unprecedented," saying all of Oregon is now facing a massive, statewide fire emergency. This morning, Brown invoked an emergency conflagration act for the entire state—something that has never been done before in the history of the state, she said.

While officials would not confirm the number of estimated deaths or the extent of property damage, Brown said, "Expect to see a great deal of loss in both structures and human lives."

Brown said an estimated 300,000 acres were burning in Oregon Wednesday afternoon—equivalent to more than 500 square miles. A combination of strong winds that blew in Monday, along with dry air and dry brush, have contributed to a "perfect storm," for the worst fire conditions in three decades, Brown said.

As of today, crews' biggest priority was finding and rescuing anyone who may still be in the area and need assistance. Yesterday, crews rescued dozens of people from evacuation areas east of Salem, but they hope to move Thursday into attempting to contain the fires.


"We are actively evacuating individuals on the Santiam Fire," said Mariana Ruiz-Temple, chief deputy state fire marshal. "We've had some significant saves—so at this time we have not been able to get into these areas."
“The Red Cross has provided a safe and comfortable place to stay along with three meals a day,” said Nadine McCrindle, executive director for the Red Cross for the Central and Eastern Oregon region. “We have volunteers on the ground providing hope and comfort." tweet this
The governor said that Wednesday morning, she directed the Office of Emergency Management to declare a federal emergency declaration—which would help the state cover the costs of supplying power, search and rescue, assistance with mortuary services and more. Oregon's entire congressional delegation—including Rep. Greg Walden (R-OR2) and Sen Wyden (D-OR) and Sen Merkley (D-OR)—in Washington, D.C. issued a press release this afternoon, saying they'd asked the president to offer expedited approval of the governor's disaster relief requests.


"The number and scale of fires burning on Oregon’s landscape at the moment are unprecedented," the delegation wrote, "and urgent action is necessary."


Eastern Oregon is the least-affected part of the state, said Doug Grafe,
Chief of Fire Protection at the Oregon Department of Forestry, with just 11,000 acres burning in the region. Compared to the west slope of the Cascades, that isn't much, Grafe said. Fire crews have one incident management team deployed north of Klamath Falls, near Highway 242, and two other incident commands in other parts of the state.

On the western slope of the Cascades, strong winds have been traveling down the canyons and driving all the fires into the valley bottoms. Earlier today, officials announced that the Lionshead Fire on Mt. Jefferson had merged with the Beachie Creek Fire and the Santiam Fires on the western slope, creating one massive fire.

Crews were "cutting into roads to see what is left in the (Santiam) Valley and how they can take fire action," Grafe said.

Just north of that massive fire, another blaze was pressing against the southern edge of Clackamas County, prompting the evacuation of the town of Estacada Wednesday afternoon. Officials expect that fire to merge with the other massive blaze. The Lionshead Fire was listed at over 105,340 acres Wednesday morning.

On the McKenzie Highway, Grafe said the Holiday Farm Fire is burning over 100,000 acres, where the entire valley has been evacuated, and officials expect to report massive amounts of damage as the days go on.

Further south, the fire burning near Roseburg, is clocked in at another 100,000 acres, Grafe said, with another fire near Medford erupting in the past 24 hours, burning about 15,000 acres as of Wednesday afternoon.
The Red Cross Cascades Region is leading the effort to care for more than 100 evacuees who left the Blue River / Santiam Pass area to escape the Holiday Farm Fire. They were directed to go to the Deschutes County Fair & Expo Center, the region’s temporary emergency shelter. tweet this

"That's the best news I can give you today," said Grafe from the Dept. of Forestry. "Tomorrow, we shift from life safety and point protection to re-establishing fire lines."

Grafe said on Thursday, the current weather pattern will break down mid-day and shift to a westerly flow and a marine air influence—which could slow the spread of the fires, but also, could push smoky air into Central Oregon. As of Wednesday, Bend's Air Quality Index was listed as moderate; cities including Eugene and Salem had air quality indexes in the 400+ range, considered hazardous.


Central Oregon has thus far been relatively free of smoke and fire—though the Deschutes County Fairgrounds are listed as one of the evacuation centers for people who fled the fires.


The Red Cross Cascades Region is leading the effort to care for more than 100 evacuees who left the Blue River / Santiam Pass area to escape the Holiday Farm Fire. They were directed to go to the Deschutes County Fair & Expo Center, the region’s temporary emergency shelter. They came very early Tuesday morning, and arrived throughout the day. Many drove through harrowing conditions on the road, over miles of downed tree branches and power lines, and through thick smoke and winds. Some came in RVs, which are now parked at the fairgrounds. Due to the COVID-19 pandemic, the Red Cross provided hotel vouchers for the Super 8 in Redmond to approximately 100 people. 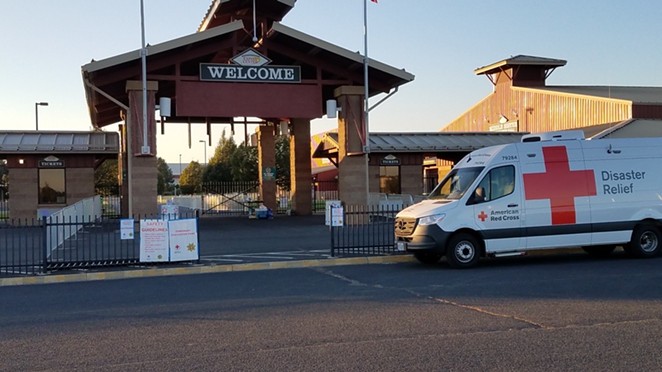 “The Red Cross has provided a safe and comfortable place to stay along with three meals a day,” said Nadine McCrindle, executive director for the Red Cross for the Central and Eastern Oregon region. “We have volunteers on the ground providing hope and comfort."

The Red Cross has seven volunteers on rotating shifts to provide care and support for the community staying at the Super 8 and RV park, and many more that help with each meal.

“We are caring for very stressed and anxious people right now,” McCrindle said. “The first 24 hours after an evacuation, people want a safe place to stay and to know they’re not going to starve. As time progresses, we’ll have more news about their movements and their future needs as they get settled. Later, we put plans together to start the recovery process of what their next steps will be. That is when they start to work with our community partners, for long-term planning. We’re working with NeighborImpact right now; they will be preparing packaged food for those who can eventually return home.”

People can donate and help the evacuees directly at the website for the Red Cross Cascades Region.

Officials also recommend evacuees use the Red Cross' "Safe and Well" website allows people to register themselves as safe so that family and friends can know they are out of harm's way.


During this unprecedented fire event for Oregon, officials also reminded people to only call 911 if there is a true emergency. Many people are calling into 911 to report smoke—which is jamming up the 911 system. tweet this
People can also donated to the Oregon Voluntary Organizations Active in Disaster (ORVOAD) at orvoad.org. Organizations include the American Red Cross, Team Rubicon, Salvation Army, Southern Baptist Disaster Relief and the Wildland Firefighters Fund.


With zero containment and winds shifting, officials at Gov. Brown's Wednesday press conference reminded people to take steps to prepare for possible evacuation, and to monitor the alerts from their county sheriff's departments.


"Understand levels one, two, three (evacuation notices). All people in western Oregon should be prepped at a moment’s notice," said Grafe of the Dept. of Forestry.


Level 1 – BE READY – Monitor emergency services websites and local media outlets for information. This is the time for preparation and precautionary movement of persons with special needs and, in some cases, pets and livestock.

Level 2 – BE SET – Be ready to leave at a moment’s notice. There is significant danger to your area. Be prepared to voluntarily relocate to a Temporary Evacuation Point (TEPO as set up by the Red Cross, or move to family/friends outside of the affected area.

Level 3 – GO – Leave immediately! Danger to your area is current or imminent. Do not delay leaving to gather any belongings or make efforts to protect your home.

In Central Oregon, the Central Oregon Fire Information website offers daily updates on fires in the region, and recommends people text "COFIRE" to 888-777 to receive wildfire and prescribed burn text alerts for the area.

In addition, the fire marshal reminded people not to return to evacuation zones once they have been evacuated, to listen to the instructions of emergency personnel, and if you're in a safe place right now, stay there.

During this unprecedented fire event for Oregon, officials also reminded people to only call 911 if there is a true emergency. Many people are calling into 911 to report smoke—which is jamming up the 911 system.

Many roads in and around Central Oregon, including Highway 22, 242 and 126, remained closed due to the fires. Use tripcheck.com to find out whether the road you want to travel on is open. 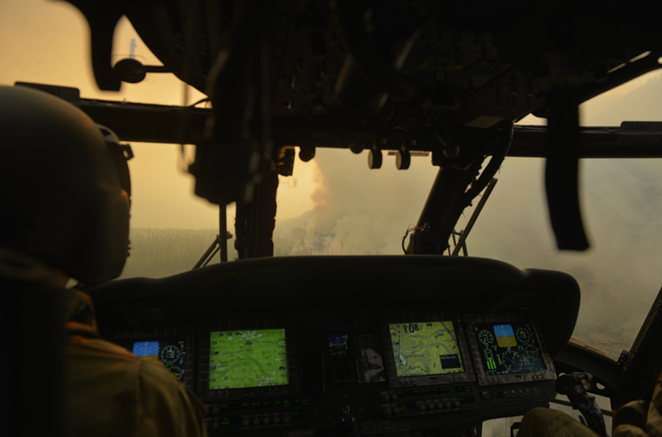