A proposal for a greater Idaho imagines Bend as a border town, just a stone's throw away from Redmond, Idaho

Before there was Oregon the state there was the Oregon territory, made up of what's now Oregon, Washington, Idaho and parts of Montana and Wyoming. Borders were set for all these western states by 1890, but now, a group of residents in central, eastern and southern Oregon are seeking to move the historic border and be absorbed by Idaho.

Move Oregon's Border for a Greater Idaho was formed in January of 2020, stemming from discussions on Facebook pages and in-person meetings with dissatisfied southern Oregonians. The group asked Mike McCarter, a born-and-raised Oregonian with a long career in Oregon agriculture, to take the lead on the project. They filed their corporate papers and before long they were collecting signatures advocating for a ballot measure. 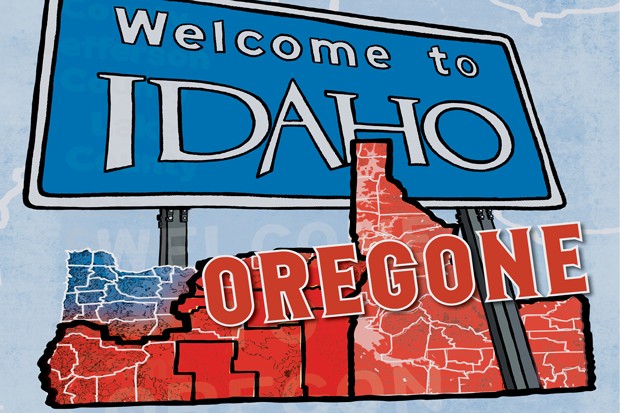 "It's not a secession, but it's a vote to start looking into the possibility of a county becoming a county of Idaho," McCarter said. "The basic idea behind it is, in a representative government, an organization like Move Oregon's Border for a Greater Idaho, you need to find out what the people think."

The group was able to get ballot measures in four counties during the 2020 general election. The first election showed mixed results, with Jefferson and Union counties supporting the measure and Wallowa and Douglas opposed. In May 2021 elections the movement was able to pick up five more counties and no losses.

"We figured out how to win, how to get the word out," McCarter said. "It's expensive when you start going direct mail to every voter in each of those counties, but that's what it took, to get the right word out. Our battle is not with people against us, our battle is to get the information out."

The information Move Oregon's Border spread involved, largely, grievances between urban and rural populations. A pamphlet from the organization asserts that Idaho has, "lower overall taxes, less regulation and interference, less unemployment and cost of living, no arsonists or rioters set free and American values." Its website features elections maps that visualize the vastly different voting patterns of rural and urban Oregonians.


"If you look at the United States map for the presidential election, you see it's almost all red, and then you got blue pockets, and those blue pockets are actually controlling everything, because that's where majority of the people are," McCarter told the Source. "We're seeing some change in the Boise area, but all in all, Idaho is a pretty traditional-valued state: faith, family, freedom, independence, and it lines up very well with the people in rural Oregon." 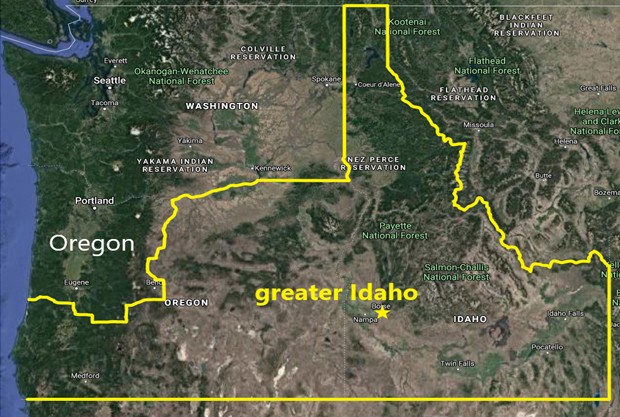 Move Oregon's Border also spells out its strategy in six steps: Collect signatures, win elections, go through Idaho hearings and analyses, lobby state legislators to negotiate a compact, vote on it as a whole in rural Oregon and, if approved, get approved by Congress.

If successful, this would transfer 18 Oregon counties and three partial counties to Idaho, which is about 76% of Oregon's landmass and 21% of its population. It would make Idaho the third-largest state by landmass and would increase its population from 1.8 million to 2.6 million. The border would follow the Deschutes River from the Washington border, circumnavigating Bend and moving west along the Klamath County lines.

"It does not include Bend and that's because we don't feel that Oregon would ever let Bend go—it's a rich city as far as revenue goes," McCarter said.

Idaho was the fastest-growing state between 2019 and 2020, according to a report from WalletHub, and over the last five years 46% of immigrants were from California. If the borders were moved Idaho's population would instantly rise about 50%. The Idaho legislators McCarter has met with have been open to the idea of a Greater Idaho.


"Part of what I said when we were first getting introduced to this, is why wouldn't we want to at least have a conversation where we're exploring adding like-minded people, with the state of Idaho right now being where we are, depending on what you look at, either the number one or number two state in the Union as far as those who are moving to Idaho," Idaho State Representative Barbara Ehardt (R-33) told the Source.

"With the legalization of what seems like all drugs and prostitution, when your whole traditional way of life is being turned upside down and you're just supposed to accept it, you again have every recourse, you have every ability to seek redress and recourse in another way," she said.

The Greater Idaho movement has presented its case to Idaho's Environment, Energy & Technology committee, chaired by Ehardt, and the Idaho Senate Resources and Environment committee in a joint meeting. The meeting introduced many Idaho lawmakers to the idea, and focused on increased water resources, agriculture, timber and ability to ship out of Coos Bay if Idaho acquired these Oregon counties.

"We've actually taken a first step, which was to hold that hearing that was held in my committee," Ehardt said. "I think that we've done what we need to do in Idaho, which is Oregon had to lead it, we have to know that there's that kind of interest and it's proving to be true with all of the counties who voted to pursue this."

The notion of counties seeking to secede from their states isn't new or unique to Oregon. In 2019, Illinois Rep. Brad Halbrook (R-102) introduced legislation that would divide the state into two. A petition to secede Weld County, Colorado, and make it part of Wyoming gathered over 10,000 signatures. The State of Jefferson, a proposed state comprised of what's now being claimed by Greater Idaho, nearly went to a vote but was abandoned when Pearl Harbor was attacked just days before the election.


Steven Beda, an associate professor of history at the University of Oregon who specializes in rural politics, said the crux of the state of Jefferson's movement was a lack of public investment rather than cultural divides.

"While the United States government was building the massive dams on the Columbia River and essentially building new irrigation networks in the Central Valley, Northern California and Southern Oregon were kind of left behind," Beda said. "The state of Jefferson movement became more of an idea than a movement, it became a shorthand for what a lot of people envisioned as the urban-rural divide."

“When we look at some of the recent climate change bills that have been proposed, some of these people in these rural communities have good reason to blame Salem for what’s going on and good reason to believe that their lives would be better independent of Salem.”—Steven Beda tweet this

Beda says the modern urban-rural divide has strong roots in the '70s when the industrial economy was declining, dragging a lot of rural professions down with it.

"Some of the industries that were hit hardest were natural resource extraction industry, so mining, ranching and here in the Northwest, especially, logging," Beda said. "At the same time, the logging economy is collapsing, and a lot of rural timber workers are losing their job, you're starting to get the emergence of the modern environmental movement, who are increasingly coming from the urban middle class and who began calling on states and the federal government to enact more harvest restrictions and more restrictions on traditional forms of land use."

With rural industries less profitable, Beda said a lot of the grievances of rural Oregon can be justified.

"Certainly, when we look at some of the recent climate change bills that have been proposed, some of these people in these rural communities have good reason to blame Salem for what's going on and good reason to believe that their lives would be better independent of Salem," Beda said. "That being said, really in terms of the logging industry, most of the logging in Oregon, like throughout the Northwest happens on federal lands. So, the Bureau of Land Management lands, and United States Forest Service lands, and that's federal policy and it doesn't matter what state these counties are a part of."

McCarter agrees with this timeline, and says more conservative areas have been trying to enact change in the government through traditional channels for decades.

"We've tried to change it over the last 25 years. And it hasn't, to some effect it hasn't even changed anything, in fact it has just gone more the other way," McCarter said.

Though Greater Idaho was on a winning streak in the May elections, there are some hurdles making it more difficult to pursue. Gilliam, Wheeler, Coos and Crook counties rejected their petition.


Proponents in Crook County have been attempting to pressure the Crook County Court—equivalent to county commissioners in other counties—to go through with the ballot measure despite the opposition from legal counsel. Election lawyer Peter Watts urged caution to the Crook County Court over the jeers of over 30 Greater Idaho proponents at its Aug. 4 meeting, stating there is not enough evidence the county would be safe from a legal challenge if it approves an advisory ballot measure.

"The long and the short of it is I can't say whether you can do an advisory vote or not. I wish I had the answer," Watts told the Crook County Court. "The Oregon constitution provides that you can refer stuff that's legislative in character. It does not say you can't refer advisory vote, and it doesn't address the question of an advisory vote one way or the other. There's no case law, as far as I know."

Supporters of Greater Idaho in Crook County are frustrated with the court, which is not allowed to suggest how their ballot initiative could be phrased to make it legislative rather than administrative.

"Verbiage is very important, and us being laypeople, we're not attorneys, and it turns out that there's just one word in our support for the petition that made it administrative instead of legislative," said Shawn Cross, Crook County captain for Move Oregon's Border.

Despite setbacks, signatures for a ballot initiative are being gathered in Curry, Josephine, Klamath, Morrow and Umatilla counties, and voters will soon cast ballots on the matter in Harney and Douglas counties. McCarter said with the right momentum, and if everything falls into place just right, then he hopes that transitioning to Idaho could happen as soon as three years. A three-year time frame is likely optimistic, according to Beda.

"If this is going to happen, and I'm very doubtful it ever will, but if this is going to happen this is the first of many procedural administrative steps that will take decades to figure out," Beda said. "The last time we shifted a state border for a political reason was during the Civil War. That's really the only example I can come up with."

"State's political leanings change dramatically, sometimes fairly quickly. Back in the 1920s, Idaho was considered the most progressive state; it had a strong Socialist Party and a strong socialist movement," Beda said.

"There is a civil war going on right now, it's just not violent," McCarter said. "That's what the word means—it's civil, and I would hope it would stay that way."