The rough-skinned newt: a poisonous curiosity in the Northwest

One of the things I enjoy about birds is watching them, the other is discussing them. Well, I guess I'd better include eating them as well.

Before I came down with my present heart condition, my diet was completely different — meat was high on the menu and Col. Sanders' fried chicken was at the top. But now with my eating habits being severely restricted to vegan foods by my dear wife Sue, meat is out of the picture, and fried chicken especially. The other day I said she had saved my bacon with her vegan foods, but she corrected me immediately, "No..." she said, "I have saved you from your bacon..." 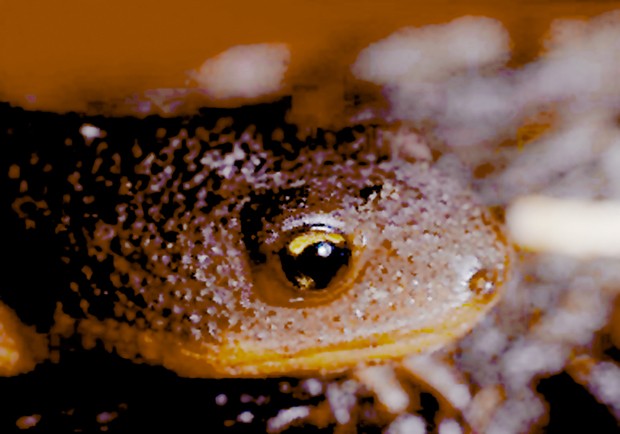 Anyway, on to our newts. They're common finger-sized amphibians of this neck of the woods—also not good for you eat—and they look just like their name: sort of brown with rough skin and an orange belly. They're out during the day or night, munching on small invertebrates such as spiders, worms and a variety of insects. And when it's time for babies, females lay their eggs in quiet waters.

But one of the most awesome—or should I say, fearsome?—facts about our local newts is that they are really, really poisonous! That "rough skin" they're named for is filled with deadly stuff!

Just to make this a little more scientific, we'll have to get into a discussion about the chemical newts carry in that rough skin. It's known as Tarichatoxin, or TTX, the same poison found in pufferfish. However, pufferfish live in the ocean, while newts are dry-land critters, found mostly in the Pacific Northwest.

Newts are the current subject of a lot of discussion on the Oregon Birders Online chatter these days. It seems someone observed a Great Blue Heron gobble up a newt and wondered (and worried) about the heron's ability to handle that potent poison in the newt's rough skin. But I have a hunch some birds that eat newts have developed a higher tolerance for newt nastiness.

"Change" is very common in the World of Nature, and in a female newt's eggs, a change in poison quantities has been noted often. So, if for some reason you get a hankering for boiled newt eggs, watch out.

My pal, Al St. John in Bend, is a life-long-time aficionado of reptiles and amphibians. He's written books about those loves of his life, including the book, "Reptiles of the Northwest," and I consider him to be an expert on the subject of herptiles (amphibians, snakes, lizards and such).

He mentioned snakes eating newts in an exchange we enjoyed in a recent email. To wit: "Yep, in the Pacific Northwest there's indeed an evolutionary arms race happening between many populations of Common garter snakes and Rough-skinned newts."

"But despite having a resistance to the newt's potent skin toxins, garter snakes are still affected by it. After shooting photos of the specimen shown above, when I picked it up in my hand I noticed that the snake seemed drunkenly lethargic and was drooling from its mouth!"

As far as TTX having an effect on birds, the popular opinion seems to be that when animals swallow the newt's poison in low doses, it can cause a tingling or numbness (St. John's drooling garter snake?) Higher amounts cause paralysis and death.

So, in that light, if an animal eats too many newts it may not see the morning sun. However, saying that, I think this subject should be looked at in a controlled situation.

When I rolled into Bend from Connecticut on my beautiful 1947 Harley in the late summer of 1951, my first paying job was fighting lightning-caused wildfires for the U.S. Forest Service. In those days there was an old trapper's cabin up near Lava Lake that was a neat place to spend the night in, especially when you were wasted from fighting fire all day.

My first night in that cabin with fellow firefighters was punctuated by an age-old tale of three trappers who died in that cabin from Rough-skinned newt poison. The story went that they accidentally scooped up a couple of newts in their coffee pot from a spring nearby, boiled them up after supper and the poor guys never saw the dawn. 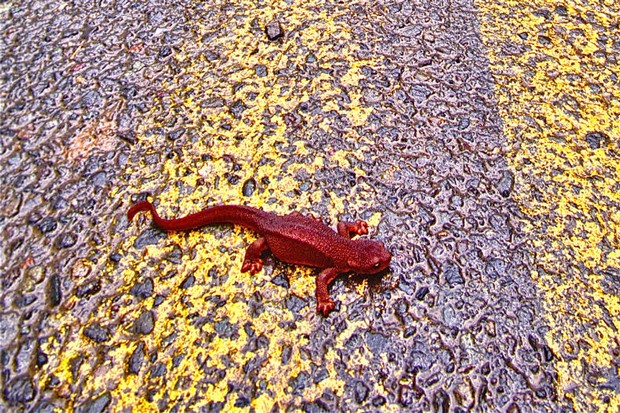 Scientifically, the newt's toxin shuts down sodium channels in a warm-bloodied animal's body, which puts a stop to breathing, and that's that.

I'd also guess that living in the world of newts and river otters is a pretty smelly mess — newts stinking up the countryside when grabbed up by otters for a meal, and dead otters lying around after said meals.

If you have a better-than-average sense of smell you will probably smell a newt if you pick one up. It's been stated that this can sometimes act as a warning to a predator who grabs up a newt to swallow it for supper. So, keep that in mind.