Out Of The Junipers, a Proposed New Camp for the Unhoused | Local News | Bend | The Source Weekly - Bend, Oregon

Urban and rural houselessness often don't look the same and have different solutions. In more-urban Bend, the rising population of unhoused has inspired both great acts of compassion from houselessness advocates and drawn ire from NIMBYs who want unhoused camps out of sight and out of mind. In rural Redmond, houseless populations aren't as acutely visible, but a growing community does exist out in the junipers.

"If you have an off-road bike, or a 4X4 or for whatever reason you're out in the junipers, you will come across the camps, but there aren't that many folks that go east," said Bob Bohac, a board member and outreach director for the nonprofit Jericho Road. 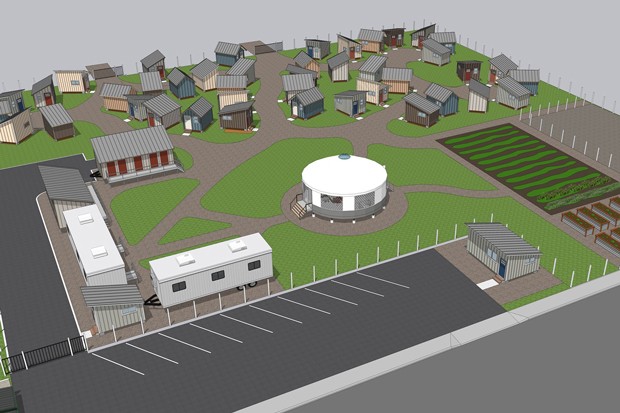 The camps there aren't like the tented and tarped ones seen in cities, and are more likely to be made up of makeshift wooden structures or RVs, but the hurdles transitioning the residents to shelters are often the same. Unhoused people are wary of leaving their belongings for too long out of fear they'll be stolen. Shelters often don't accept pets and high barriers to entry can exclude people who use drugs or alcohol.

To meet these needs, the Redmond Village Team was created over three years ago under the umbrella of Jericho Road, informed by the success of Rogue Retreat's Hope Village in Jackson County, where volunteers had successfully created a village for unhoused people. The team unveiled a rough design of the proposed village on July 28.

"When we started doing this, we simply said we had to create a safe, secure environment, and that meant bringing people out of the camps," Bohac said. "It's a lot easier to get a person into recovery to change their habits when they aren't anxious everyday about their safety or whether their goods will stay with them."

The concept is called Oasis Village, and current plans consist of 10 to 12 individual single-bedroom units, a kitchen facility, a shower trailer, a restroom trailer and a lounge area on an acre-and-a-half lot.

"We've had situations in the past where individuals either wanted to get out or just absolutely needed to get out of the junipers, and when we tried to get them into Bethlehem [Inn, a local shelter] they couldn't pass a blood test," Bohac said. "Bethlehem is certainly needed. It's high barrier, however, so there's a good percentage of the folks out there that can't take advantage of the temporary sheltering that Bethlehem Inn has."

Guests at the village will be able to stay anywhere from six months to two years as long as they are making progress on the goals they set in their individualized programming.

"They have to agree to make successful steps, whether it's in terms of acquiring identification, working on an alcohol or drug problem, mental health issues and most importantly finding stable housing," Bohac said. "And it's sliding. If someone fails to make progress, they will be asked to leave the village. We're trying to help those who wish to help themselves."

“In the end, everyone, every community that we’ve investigated, most importantly in Medford and Eugene, once the village is up and running the situation within the community with houselessness improves.”—Bob Bohac tweet this

Programs at the village are planned to be tailored to the individual needs of the guest, and the village will hold workshops on relevant topics like accessing social security benefits, applying and interviewing for jobs and budgeting. It will also make it easier for social services to consistently meet with clients.

"To us, that's an essential part of what the village would be. It's not just a physical location for folks to move out of the junipers, but even more importantly, it's the ability to work with individuals who can help actually help them access social services much more easily," Bohac said.

The pieces are there for the Oasis Village project. Jericho Road will source the funds, and the nonprofit has made connections with Hayden Homes and conducted a lot of consultations with Rogue Retreat; now it just needs a location. The Redmond Village Team said it has been in contact with both the City of Redmond and Deschutes County to find a suitable piece of land that's close to needed services like grocery stores and other nonprofits, but not too close to residences that would cause a backlash.

"Especially the first time something like this comes into a community there can be a fair amount of resistance simply because it's new," Bohac said. "But in the end, everyone, every community that we've investigated, most importantly in Medford and Eugene, once the village is up and running the situation within the community with houselessness improves."

Though nothing is set in stone yet, and no outreach has yet been done to people living east of Redmond, Bohac said once a site has been found they will hopefully be able to proceed quickly into the building process.

"Once we have that piece of property, judging from the timeframe at Opportunity Village and at Hope Village, we believe that within nine to 12 months we would be having opening week with the partners that we have right now, we would be able to proceed fairly quickly at raising funds," Bohac said.

After being built the village could be scaled up from 10 units if Oasis Village finds there is the need and is able to successfully fund and staff the project.

"We're looking for a piece of property that would be at least an acre and a half, so that we could build eventually to somewhere between 30-40," Bohac said. "Once we have a tract of land, and we are ready to dedicate and start construction, then we will certainly spread the information and start talking with people who are in the junipers."