Out of this World | Sound Stories & Interviews | Bend | The Source Weekly - Bend, Oregon

Out of this World 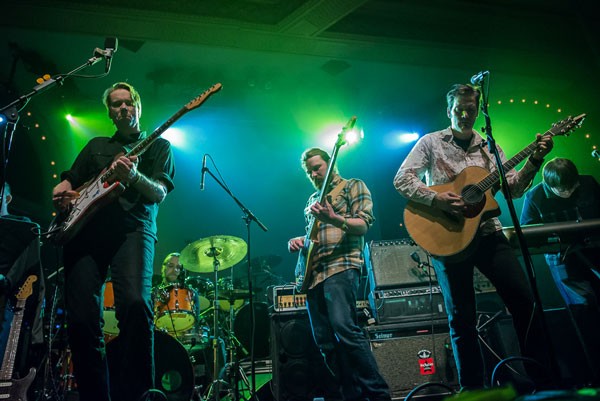 Daniel John Riddle has been writing, recording and releasing music under the band name King Black Acid since the early '90s, coming of age in Portland during a pivotal time in music, and sharing the stage with Nirvana and GWAR.

Over the years, Riddle has developed a different point of view about the band, seeing it more as a collective. With players rotating in and out, each iteration takes on a different subtitle to differentiate the sound, style and lineup. Over the years, those have included King Black Acid and The Crystal Unicorn, as well as King Black Acid and The Womb Star Orchestra. Riddle remains at the center of the collective, providing most of the writing, guitar, vocals and production.

"Sometimes we just call it King Black Acid," Riddle says. "The regular fans—at least the ones around Portland—know if they see us six weeks apart, we're going to change the set list. I think it was just my attempt to let the audience know it's never going to be the same twice, it's always changing and expanding and contracting. It's a living, breathing, moving thing. I'm not King Black Acid, I'm Daniel and I just orchestrate this energy."

King Black Acid plays experimental space rock, taking an often-psychedelic turn. For Riddle, playing this kind of music comes naturally, attributing it to the environment in which he grew up. His mother was a hippie in the '60s. One of her boyfriends drove a truck for the Grateful Dead. His neighbors were Neil Young and Crazy Horse. He recalls The Allman Brothers and Santana being around.

"They must have rubbed off on me a little bit," Riddle says of his influences and affinity for psychedelic, space rock-style music. "And, of course, in high school someone played Pink Floyd and Brian Eno and my head exploded. I think a lot of it was just environment. My brain worked in that way."

"We have one record that had three 18-minute songs. That shows you we weren't really concerned with crafting the perfect four-minute pop song like The Beatles." —Daniel John Riddle tweet this

Even though King Black Acid has been creating music for decades, you may not have heard of them within the current musical landscape. Riddle unintentionally took a 15-year break between full-length albums. In the interim, the band recorded singles, worked on film scores and soundtracks, and recorded two albums, never released. He also became a father. When his daughter got older, it was time to revisit King Black Acid.

"That record I made, some of the songs were songs I'd been working on since the early '90s," Riddle says. "They were all orphaned ideas that didn't seem to fit anywhere at the time. These songs were all ideas and collaborations. I worked with Jerry Joseph from the Jack Mormons, my friend Kelly from a band called Goldfinger. I worked with a bunch of collaborators and fostered these ideas that I hadn't done anything with. Now, I'm back to work and busy with the band, working on new releases, playing shows—we're quite active."

Moving forward, Riddle wants the music to become more vocally rich and to focus on the craft of songwriting. He plans to bring in more vocalists and learned instrumentalists. One of his keyboard players is a recording artist and producer himself. Riddle sees the band evolving to be more musical, more lyrical and more focused — and he plans to take more risks.

"In the past, the live show was the main focus," Riddle says. "We have one record that had three 18-minute songs. That shows you we weren't really concerned with crafting the perfect four-minute pop song like The Beatles. We were intent on exploring sonic boundaries and taking the listener along with us."