Can one below-average snowpack year make or break a high desert summer? 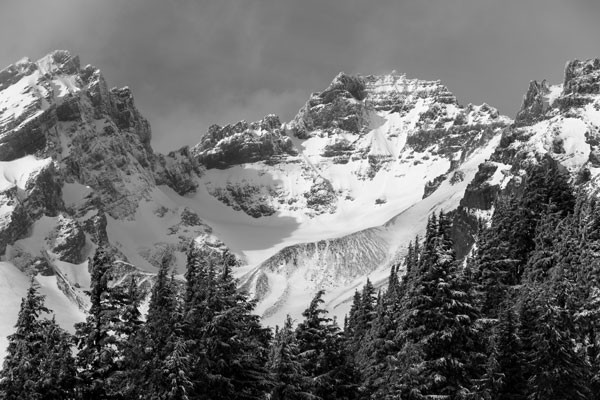 On the Lower Deschutes River near Warm Springs, Alysia and Elke Littleleaf recall the effects of the drought in 2015, brought on by low snowpack. Warm Springs had to go on emergency rations for home water usage, recalls the pair, owners of Littleleaf Fishing Guides.

Alysia also recalls blooms of green and blue algae, black spot disease and freshwater lice developing on redside and steelhead fish as a result of the low flow in the Deschutes River.

She also believes Portland General Electric's selective withdrawal unit—the existence of which is the basis of a lawsuit filed by the Deschutes River Alliance against PGE—combined with low flow, contributes to warming waters and algae growth, all creating a domino effect that means a loss of water clarity, degradation of spawning beds and smothering of fish and insect eggs through lack of oxygen.

"These eggs are a great importance to the local and seasonal birds and reptiles," explains Alysia, "who depend on the insects for food. During the last drought we didn't even see swallows for two years in a row. Any local fly fisherperson knows the importance of using the swallows as an alarm to switch flies... It's a great importance to keep nature balanced as intended."

This year, the swallows are back, and in spite of the threats that low snowpack can bring, the Littleleafs are forecasting one of the best fishing seasons in many years.

The Impact of Water Flow

At first glance, the high desert might seem to be pretty desolate year-round—but the desert really does have seasons, and water resources cached in the winter are integral to sustenance in summer. The Deschutes River Basin is a smorgasbord of resources, and the lifeblood of these resources is the Deschutes River.

In terms of the bigger picture, Jay Bowerman, a biologist for Sunriver Nature Center, is primarily concerned with the Pacific Northwest's most influential threatened species: the Oregon spotted frog.

"Contrary to what you might expect, years of drought and low water, like this year, tend to produce the highest hatching success and recruitment of new frogs into the population," he says.

Bowerman details how frogs have a propensity to lay their eggs in shallows near the edges of bodies of water. During high water years, the frogs move their spawn sites up and lay eggs in locales that de-water when the river level drops. Eggs and tadpoles can be stranded when water levels recede. These perched ponds tend to dry out during the summer, killing eggs and tadpoles. Although, he says it's important to remember perching could happen in water one or two feet deep; for a frog, still constituting a relatively stable flow.

In its free flowing state, without dams and other engineered feats, the Deschutes River is recognized as one of the most stable water systems in the world. This is no small wonder when considering the seasonal flooding and subsequent havoc that remain a mainstay for rivers in the Willamette Valley.

In the Deschutes River Basin, stability is largely attributed to the vastness of the recharge zone—the zone where water enters an aquifer—which becomes more prolific closer to the source. For the layperson, this means the water that fills the Deschutes River is collected in greater quantities farther upriver. Tracing the Deschutes River toward Wickiup Reservoir, or south, elevation is gained and the basalt rock formation which underlies it becomes thicker and wider. Think of casting a wider net and catching more fish. Like a giant funnel, the pores that formed during degassing thousands of years ago form conduits for the melt and meteoric rain water that eventually make it into the main river channel.

Tracing the Deschutes downriver, to the north, at lower elevation, the basalt formation tapers out and recharge lessens. The complex water communications network which underlies the Deschutes is massively dependent on snow melt. Thus, a below-average snowpack year can cast a shadow on the following summer.

"When there is a below-average snowpack, like 2015 and this past winter, we see the source springs to the Deschutes River decrease," says Jeremy Giffin, watermaster for the Oregon Water Resources Department's District 11, which includes Bend. "This decrease in natural flow of the river limits our ability to fill the storage reservoirs in the upper basin. Because the Deschutes aquifer is vast and always recharging, it has the ability to weather one or two years of below average snowpack."

Giffin says this summer, Deschutes River Basin reservoirs will likely draw down faster than normal, but irrigators won't necessarily feel an effect and water supplies should be normal-ish. "A patron to an irrigation district may see voluntary conservation measures enacted, or in an extreme drought, may have their yearly water allotment curtailed."


"With respect to the impact on soil moisture, early drying of the ground and understory vegetation is commonly reported as a contributor to an early onset of fire season." —Jay Bowerman tweet this

The Water Resources Department's main mission is to directly address Oregon's water supply needs, and to restore and protect streamflows and watersheds in order to ensure the long-term sustainability of Oregon's ecosystems, economy and quality of life.

As a result of reservoir shortfalls, Kyle Gorman, manager of the Water Resources Department's South Central Region, thinks it's possible that "irrigation water rights with the most junior priority dates could see a reduction in their supply." He adds, "With the tremendous amount of groundwater influence on the flows of the river, the Deschutes is buffered fairly well against a single year of drought but will see longer-term effects due to multiple drought years."

Even in the worst-case scenario (which Central Oregon isn't in, these water experts say), Giffin says, "Most people would not see a change in their ability to access water for daily living from a drought. Locally, we might have limited recreational opportunities due to lower reservoir levels, and the natural flow on the Deschutes River could be lower through the winter, potentially affecting fishing and rafting."

Even if the heavy rains do come, they may not stop the drying that precedes a heavy wildfire season. Bowerman, with the Sunriver Nature Center, links a low snowpack year to dryer soils.

"With respect to the impact on soil moisture, early drying of the ground and understory vegetation is commonly reported as a contributor to an early onset of fire season," he says.

Every year, the National Interagency Fire Center issues the National Significant Wildland Fire Management Projected Outlook. The outlook, issued April 1, had the following prediction for the Pacific Northwest Region: "Normal significant wildland fire potential is expected for the Northwest through the outlook period through June followed by Above Normal significant large fire potential for south-central southeastern Washington and southern and north central Oregon for July."

In light of the disturbances last year's fires caused for people in Central Oregon, it seems wildland fires and their associated hazards present the most urgent summer concern.

Warm Springs guide Alysia Littleleaf says of last year: "Our own home was endangered to a fire that came within 100 yards. We had to cancel out a whole month of fishing trips due to the smoke and low water conditions. Many of our wild animals and horses died."

Alysa remembers the Deschutes River through the eyes of her ancestors during their weekly fishing excursions. "High in the desert, along the rivers, were the main food sources, gathered annually each season... Back when the water was so clean, you could drink freely with no worries of contamination or pollutants. The Indigenous people knew how to make a living in the harshest conditions with ease."

If Central Oregon's ancestors could survive low-snowpack years and continue to uphold the highest standards of value and equilibrium with their landscape, hopefully Bendites will take a song from that book this summer.

Experts, including Bowerman, recommend keeping dogs on a leash in delicate riparian zones along the river—helping to ensure that delicate species such as the spotted frog have a greater chance of survival. In addition, a visit to The Museum at Warm Springs to learn more about sustainability and resource management couldn't hurt.

The number of miles of canals delivering water to over 160,000 acres of agriculture in the Deschutes River Basin.

The estimated amount of water lost during transport in canals.


Density and water content of snow can vary dramatically depending on where and when you take a measurement.