Overcrowded and Understaffed ▶ [with video] | Outside Features | Bend | The Source Weekly - Bend, Oregon

Overcrowded and Understaffed ▶ [with video]

Parking at Smith Rock has never been easy. With state parks on limited services and staff due to the pandemic, things are even tougher.

Oregon has 256 state parks—meaning a lot of sites to manage across a wide swath of land. So what happens when those popular destinations are understaffed? We're seeing the toll that parks take right now. 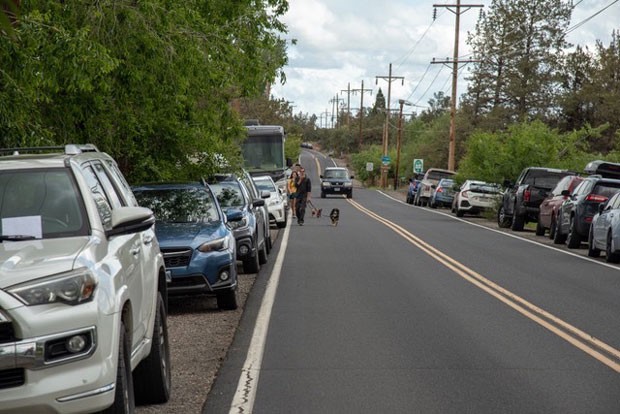 Due to COVID-19, many organizations and businesses are experiencing issues with staffing. The Oregon Parks and Recreation Department is no different. OPRD isn't funded by taxes, but by revenue gained from visitors to parks and trails in Oregon. Because most of these parks and areas were "closed" to the public at the end of March, OPRD hasn't been bringing in its normal share of revenue during this typically busy time of the year. And even though people may have still been using day-use areas, it doesn't mean they were paying fees at trailheads. Without reservations at campsites or lottery fees, OPRD's main source of revenue was missing entirely.

"Our field staff have already been operating with far fewer staff than normal, so while there are no new layoffs planned out on the front lines, we haven't recalled the seasonal workforce and we've frozen hiring into vacant positions," said Chris Havel, associate director of OPRD.

These budget shortfalls have turned into reduced park services all over the state, mostly affecting landscaping, trash collection, restrooms and drinking water sources. As Havel put it, many parks are running on "half steam." That includes some parks in Central Oregon.

"Smith Rock has a small crew normally (five people), and they're down to three. Misery Ridge at Smith Rock is still closed to reduce close contact between people, and to give the county Search and Rescue team a break," Havel told the Source. "Even closed, the weather takes its toll, and the Misery Ridge trail suffered erosion damage in that big storm that rolled through. It can be especially hard to keep up with wear-and-tear due to budget difficulties."

People show up in herds to Smith Rock year-round, and despite reduced staff and services, 2020 won't be any different. This also means that things like parking overflow, an issue that happens every year, might even get more out of hand now that people are finally free to enter the park.

"Parking at Smith Rock is especially challenging. If there's no room on the lot, leave and come back later. Parking just anywhere can damage your vehicle, and if you park in a way that poses danger to traffic, you could be cited and towed," added Havel.

The Terrebonne Neighborhood Alliance is currently looking for an interim solution to the issue of parking at Smith Rock and has created a petition to have the overflow addressed.

"Once we have enough signers, we will organize a meeting with representatives from the parks, fire department, county health, sheriff, county roads and county commissioners to develop an immediate short-term solution," Al Dertinger, liaison for the TNA and representative on the State Park Master Planning Committee, wrote in an email.

Once the petition reaches enough signatures, TNA hopes to address the safety of community members in the rural area. For instance, the overflow parking spills out onto Wilcox Avenue, and both on 17th and 33rd Street—shoulder-less roads that aren't meant to hold parked cars or serve as a passage for heavy foot traffic. Parked cars and pedestrians make it a dangerous trip for locals who regularly use these routes, locals complain. Members of TNA are also concerned about impeding access for emergency vehicles.

"While overcapacity is an issue for Smith Rock State Park, the issue spills over to our community in the form of crowded roads, discarded trash, livestock issues, and speeding," the petition reads. "This impacts the quality of our rural life and potentially our lives by restricting access to our homes and property by emergency response teams."

Neighbors are also concerned about the effects of the COVID-19 pandemic. With Smith Rock opened on a limited basis, TNA also expressed concerns about a large influx of people from out of town who aren't complying to safety measures, potentially risking locals' health.

Among its suggested fixes, TNA wants park officials to post signs that tell people to come back another day when the overflow lot becomes full, and to lower speed limits on adjoining roads, as well as eliminating road parking on Wilcox, 17th and 33rd, with enforcement to follow. The TNA petition is accessible at: thepetitionsite.com/784/088/298/make-smith-rock-state-park-great-again/.