Paisley: All you need in Oregon's Outback 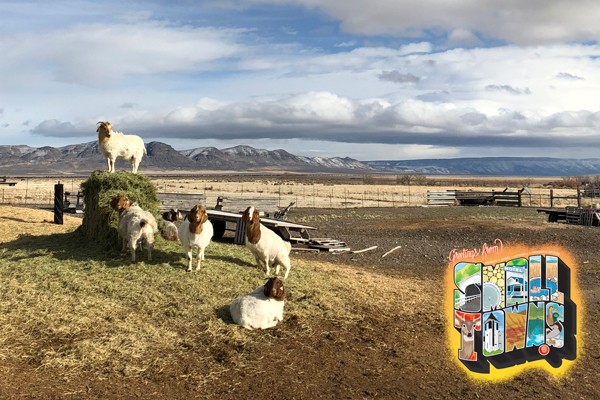 Likely to greet you when you roll into Paisley, on Highway 31: a flock of inquisitive sheep—or perhaps a herd of cattle, ready to drop their early-spring calves. The incorporated town of Paisley boasted 372 residents, according to stats released by the U.S. Census Bureau in 2016, and locals here like it that way. Come for recreation, the wide-open spaces and some friendly faces—but don't think about staying, locals tell me. Sounds familiar...

Who This Trip is For:

Anything you do here typically involves indulging in the wide-open spaces. Bird watching is a popular activity around Summer Lake. Fishing and camping along the Chewaucan River also plays big, and not far from Paisley lies access to the Oregon Timber Trail, a 668-mile bikepacking route that spans the state. Soaking at Summer Lake Hot Springs, whether as a day tripper or an overnight guest, is a popular activity for visiting Benditos. Also check out PLAYAPresents, the Open Studio days once a month at PLAYA, the area's artist in residency program. Summers have traditionally meant the annual Mosquito Festival, which raised money for vector control, though locals tell me it's still undecided whether it will continue this year.

Paisley proper offers a whopping two spots for eats. We headed to the Homestead Cafe first, a fairly classic diner with twirly chairs that let you belly up to the counter, all while warming yourself near the giant woodstove. We'd heard tales of the delicious burgers, so each member of our trio ordered a different one, each hand-pressed. One member of our group—a bona fide farm girl who knows her way around cattle country—said her mushroom burger was the best she'd ever had. The city slicker in me, accustomed to hearing about "artisanal this-or-that" from every roadside pit stop within 100 miles of Portland, asked if the beef was local. It wasn't. Still, killer burgers.

Also along the biz strip is the Pioneer Saloon, also gaining a strong reputation for its menu. Owner John Steffes has plans to integrate a farm-to-table program in the saloon, but for now, the spot's house-smoked tri tip recently received a nod from Sunset magazine. Apparently the word is out across the West. We stayed for a whiskey drink (what else?), charmed by the decorative historic bar, shipped around Cape Horn in the 1800s, the company and the juke box. Also note: while some towns of bigger populations can't boast a drive-thru coffee stand, Paisley can.

In town, the Paisley Sage Rooms offers motel rooms for $75 a night. Six miles northwest of town along Hwy. 31 is Summer Lake Hot Springs, offering cabins starting at $100 a night as well as camping. The Lodge at Summer Lake offers rooms starting at $63 per night and cabins from between $65 and $140. Locals have also gotten in on the Airbnb game; look for a handful of cabin rentals, and even a doublewide available right in Paisley. Eight miles west of town is the Marster Spring campground, adjacent to the Chewaucan River. Rock hounding is big in the wider region.

If you stop into one of Paisley's churches, don't show up late or the pastor might stop the service to acknowledge your tardiness.

The word "playa" is not a term created at Burning Man, and Lake County has one, too. Playa actually refers to a dried lake bed, as in, the white expanse that is Summer Lake during the dry months.