A longtime Bend favorite is back for breakfast

A 500-foot outdoor deck and Bloody Marys are a couple of the upgrades at the newly renovated Palmer's Cafe. This longtime Bend favorite is back in action after a recent remodel. The cafe and adjacent Palmer's Motel is owned by Bend native David Langmas, who now runs the cafe with his daughter Chloe. If you've been in Central Oregon for a while, you're probably familiar with Palmer's, famous for its huge breakfasts and often referred to as Bend's best kept secret.

The cafe, in business for over 50 years, has touted itself as the best breakfast in Bend throughout the decades. The main dining area was built by Palmer Discus in 1922 and originally was his home. In the 1950s, Palmer's became a social gathering place with dances and potlucks. During the recent remodeling, Langmas, who has owned the cafe and motel for about 20 years, did his best to keep the spirit of the 99-year-old building alive. Fresh paint, new flooring and beautiful framed photographs of the Central Oregon outdoors welcome hungry diners. The vibe is warm and friendly and the food is better than ever. 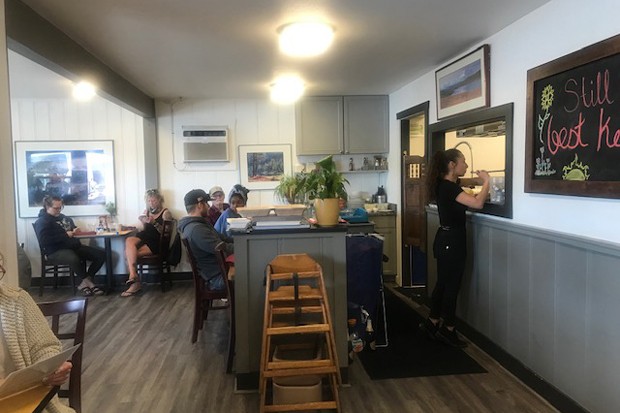 "I wanted to make it great for locals in my city, with great food and prices where they believe they are getting a great deal," Langmas expressed as he was pouring a coffee refill on a recent Saturday morning. Yes, the owner himself is busy bussing tables and pouring coffee and chatting with diners, which only adds to the down-home atmosphere. While he's owned the building for the past two decades, he never actually ran the restaurant himself before now.

Currently, breakfast is served Tuesday through Sunday 6:30 a.m. until 1:30 p.m. Daily specials include lunch-type offerings like the gigantic Reuben sandwich. The breakfast menu is huge, covering two full pages and includes every kind of fluffy omelet you can imagine. Along with the Meat Lover's, Denver and Veggie, there's the Todd Lake with grilled chicken breast, bacon, mushrooms and avocado and the Sparks Lake with corned beef hash, tomatoes, onions, mushrooms, jack and cheddar cheeses. There are also several choices of scrambles such as The Pilot Butte (Kitchen Sink) and those, along with the omelets, are all served with a choice of toast and creamy, perfectly browned homestyle potatoes. Page two of the massive breakfast menu includes biscuits and gravy, a Palmer's Gravy Eggs Benedict, country fried steak, a couple of different steak and egg choices, plus French toast, Belgian waffles and Swedish pancakes.

If you're wondering what's so special about a Swedish pancake, well a lot, at Palmer's, anyway! They're thinner than regular American pancakes, more crepe-like, but still a pancake and at Palmer's they're plate-sized and can be served with fresh fruit, syrup and whipped cream. Sometimes when you see fresh fruit on a menu, it's easy to be skeptical and have low expectations for what that means. The fresh fruit at Palmer's right now includes huge Oregon marionberries, strawberries and blueberries, all ripe and sweet.

While the perfect cup of diner coffee compliments a Palmer's breakfast quite nicely, other drink specials include Bloody Marys, Bloody Marias, Hot Toddys, Irish Coffees, Mimosas, cider and beer. Those cocktails are reminiscent of a nice brunch, which if you're having a midday breakfast on the Palmer's spanking new deck boasting umbrellas and huge pots of lovely flowers, you're having a very nice brunch.

The updated interior feels fresh and clean yet isn't so modern that the place has lost all of its original diner feel. They've kept the infamous cafe sign and the portions have remained large (seriously, consider sharing if you prefer smaller portions) while the atmosphere is friendlier than ever with the owner and his daughter Chloe serving guests and making everyone feel right at home. Oh, and the food could definitely be considered as one of the best breakfasts in Bend.