May 04, 2020
comment
Panic buying and empty grocery store shelves have inspired some people in Central Oregon to rethink the importance of a sustainable, local food economy. 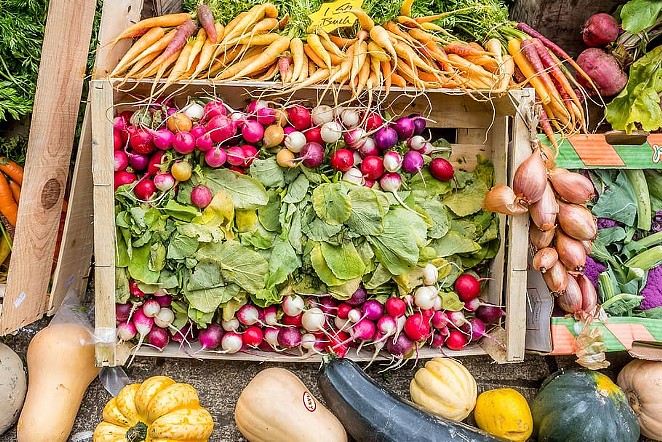 At Central Oregon Locavore—a nonprofit indoor farmers market on NE Third—sales have more than doubled since the pandemic began, according to Nicolle Timm-Branch, president and founder of the organization.

“People are interested in being healthy so their immune systems can stay strong,” she said. “They also want to do everything they can to support the local economy through this.”

Timm-Branch referenced the recent COVID-19 outbreaks at commercial meat processing plants around the U.S. After some plants closed due to employee illness and lack of demand from restaurants, President Trump envoked the Defense Production Act to keep the industry afloat, according to Vox.

“People are realizing our conventional systems are not as stable as we thought,” Timm-Branch said.


People are cooking and baking more in the pandemic, and thinking more about healthy food and food sourced locally. - Chantel Welch, the program director for the High Desert Food and Farm Alliance tweet this

The agriculture industry has continued to make headlines since the outbreak, as large farmers dumped thousands of gallons of milk and buried millions of onions, even as demands increased for produce from food banks and other nutritional assistance programs, according to The New York Times.

But that’s not happening in Central Oregon, Timm-Branch said.

Most food-producing operations in the region are small and family-owned, she said. As demand has surged for locally grown and harvested food, many farms expanded their Community Supported Agriculture programs—shares that local people can buy, which guarantee they will receive a box of vegetables and (sometimes meat) throughout the season. But even with more shares available, these programs are mostly sold out.

As local farms have lost accounts with restaurants, direct-to-consumer sales is picking up the slack.

Sungrounded Farm—which sits at the base of Smith Rock in Terrebonne—was started by Ashley Petersen and Caleb Thompson two years ago. Petersen said the couple is scrambling to keep up with demand: This year, they doubled their CSA program and quickly sold out of shares. Meanwhile, re-orders keep pouring in from the Tumalo Farmstand and Locavore.


For those who missed the chance this time around to join a CSA, the Central Oregon region offers a plethora of opportunities to support farmers and buy local. Locavore is open seven days a week, and most regional farmers markets are slated to open in early June. (See full list of dates and links below.)

For those who want farm-fresh produce delivered right to their front door, Agricultural Connections in Bend offers a “harvest box” that changes every week and is packed with fruits and vegetables from nearby farms.

AC mostly sells to restaurants, but demand for direct sales has been huge since the pandemic began, according to Kelly Vormelker, the company’s general manager.

“We’re really happy we’ve been able to pivot our focus so quickly, to give the community an answer during this crazy time,” Vormelker said, referring to not just consumer demand, but to the farmers, millers and ranchers AC has helped while restaurant orders have plummeted.

Vormelker is hopeful that even after the pandemic is over, the local community will continue to support the local agriculture economy.

“A lot of people are disconnected from the way they shop; how they get food on the table,” she said. “But as people are forced to change some shopping habits, they’ll gain a better understanding and appreciation for where their food comes from.”

Chantel Welch, the program director for the High Desert Food and Farm Alliance, agrees the pandemic has inspired some healthier and more sustainable habits.

“People are cooking and baking more in the pandemic, and thinking more about healthy food and food sourced locally,” she said. “Once you get in that habit, it doesn’t seem as hard to support local markets and stores, not as much of a challenge to be a part of the local food system.”

The local food supply operates on a much smaller scale than some national food producers hit hard by the crisis. Funneling food from farms to those in need is much easier here because the infrastructure is in place, Welch said. Last year, local farmers donated 16,000 pounds of produce to NeighborImpact’s Food Bank, which then distributed it to 47 local agencies. This year, farmers who donate food to the food bank will get paid through emergency funding secured by the Central Oregon Health Council, Welch said—something else that might help offset the hit from decimated restaurant sales.


Farmers markets in a pandemic


Another local market open right now, besides Locavore, is run by the owners of General Duffy’s Waterhole in Redmond every Saturday from 11am-3pm. (Senior / vulnerable hours 10-11am.)

“It was a little nerve racking with all the rules I have to follow,” said Susan Robertson, who runs the market and bar along with her son and husband near downtown Redmond. “I have four pages of rules from the governor of what is expected of the vendors, the public and us.”

This weekend, people waited outside the market to enter in a line where they stayed 6 feet apart, Robertson said. Then customers circled past each table in a one-way line.

“The Saturday market lifted a lot of people’s spirts,” Robertson said. “People told me it felt good to be outside; felt like a little bit back to normal.”

Petersen of Sungrounded Farm said she’s expecting some complex rules from both the Northwest Crossing Saturday Farmers Market and the Bend Farmers Market on Wednesdays. These rules will be layered on top of Gov. Kate Brown’s instructions. Petersen expects restrictions like pre-packaging all vegetables and no use of food scales.

“Seems a little crazy that supermarkets don’t have to adhere to all of these extra rules,” she said.