Pandemic or Not, the (Radio) Show Must Go On | Source Spotlight | Bend | The Source Weekly - Bend, Oregon

Pandemic or Not, the (Radio) Show Must Go On

A young radio host shares his love of music over the airwaves, with some social-distancing adjustments

Things were going well for McKenzie McCulloch in his young radio career. First, he completed an internship at Central Oregon's community radio station, KPOV, and was four years into hosting his own show, "Ken and the Kindred Spirits," airing Sundays, where he goes by his radio name, Ken McKenzie. Then Bend Radio Group hired him as a production assistant for the morning show on KSJJ, what McKenzie called his "dream job." 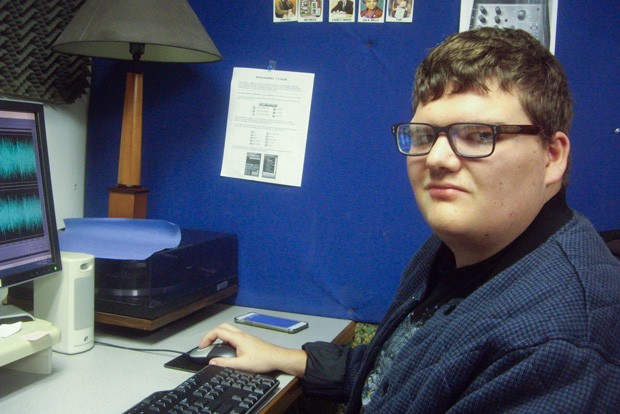 And then the pandemic hit.

He continued doing his weekly country-pop KPOV show, though he had to produce it remotely from home, like most of the other KPOV deejays. Meanwhile, Bend Radio Group had to indefinitely furlough a portion of its staff, including McKenzie.

"I have really missed my work there and the new people who I was getting to know (at BRG)," McKenzie said in an email.

Mom Debra McCulloch said of her son, "He's a good kid and he can do so much more than people think he can. We're so thankful that KPOV gives him this opportunity." She says McKenzie was diagnosed with speech and language delays at the age of three and was formally diagnosed with autism at age five. The family views his autism as a "super power," Debra McCulloch said.

One of the people giving the budding creative a chance was Mike Flanagan, Backyard Bend program director for BRG, who says he first met McKenzie when the aspiring deejay did a job shadow. "I could tell right away he understood and had a passion for radio broadcasting," Flanagan wrote in an email. "I was able to carve out a position for him this year. He quickly learned his duties and excelled at them, as I knew he would."

Flanagan said McKenzie would generally communicate in "short phrases, single word replies and facial expressions," but that he wanted to offer him a shot to do some "voice work," anyway. "Given the opportunity to handle some on-air work, he turned on the microphone and magic happened. He came alive with his personality and emotion."

“It’s been such a joy watching him develop his skills and confidence as a radio deejay. His passion for radio and his drive to achieve his goals are impressive.”—Jill Mahler tweet this

One Sunday morning not long before businesses started to close their doors, I visited McKenzie at the KPOV studio.

When asked what country artists he liked most, he rattled off a Hall of Fame list: Waylon and Willie, Merle Haggard, the Highwaymen, Johnny Cash, Charley Pride, Patsy Cline, Tammy Wynette, George Jones, Tanya Tucker and Hank Williams—all in one breath. But he also said he plays newer country artists on his show, like Michael Ray, Justin Moore, Luke Bryan and Morgan Wallen. And to keep listeners on their toes, he'll throw in some Kraftwerk, Fleetwood Mac or David Bowie.

McKenzie, 24, says his mentor was the late KPOV deejay, John Pesma, who hosted the country swing show and introduced him to what would become his sign-off theme song, "Mexico," by Bob Moore and His Orchestra. His favorite part of working in radio: "The talking, the board, the mic and the music," McKenzie says.

"I have had the pleasure of working with Ken, as both a volunteer and paid intern at KPOV since he first took our deejay class," says KPOV Station Manager Jill Mahler. "It's been such a joy watching him develop his skills and confidence as a radio deejay. His passion for radio and his drive to achieve his goals are impressive."

During the pandemic, McKenzie learned how to produce his show from home. "I like it, and I have learned some new skills with my new microphone and the station software program, Adobe Audition, plus how to send it to the station," he said during the shutdown. "It takes longer to do at home, so I really miss the KPOV station equipment and people." He has received instruction from fellow KPOV show host, Chuckaroo the Buckaroo, and other hosts through emails, according to his mom.

With guidelines now eased from where they were earlier in the spring, he's back to producing his show in person, at the station where his career began.