The Deschutes County Sheriff's Office is cracking down on illegal parking at Smith Rock State Park as crowds surge to unprecedented numbers. Deputies issued 19 parking tickets in March, mostly around spring break, according to Sgt. Jayson Janes, a public information officer with the Sheriff's Office. 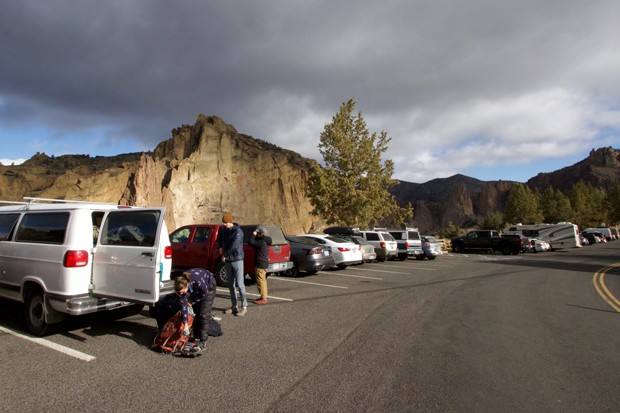 This comes after deputies received several complaints from people who live close to the park. As Janes explained, the roads are narrow, and people have been walking along them— sometimes for more than a mile—to get to Smith Rock. What little shoulder exists isn't enough to keep pedestrians and drivers safe.

"With the additional traffic on the roadway, it's just creating a hazardous situation," Janes said.

Parking is not allowed on Northeast Smith Rock Way, Northeast Wilcox Avenue, Northeast 17th Street and Northeast Crooked River Drive. Last year, officials lined the roadsides with "NO PARKING" signs. Not everyone has taken the warning seriously, but the $115 price tag on each parking citation might change that.

Sunlight had freshly fallen over Picnic Lunch Wall on Saturday, April 10, but already the park buzzed with activity. Darren Redden, a climber from Portland visiting Smith Rock with his two friends, Emily Johnson and Tim Han, arrived shortly after sunrise and had just finished packing their gear into three large backpacks.

"We just try to get here early enough for the parking," Redden said.

By 9am, the main parking area was a glittering sea of Sprinter vans, kitted-out pickups and Subarus. Newcomers spilled into an overflow lot in a dirt field across from the visitor center.

It's not just climbers who covet an excursion to Smith Rock. Travel Oregon lists it as one of the "7 Wonders of Oregon," (cue incoming crowds). Hikers, photographers, wildlife enthusiasts, extreme slack liners and others flock to the 650-acre park every year.

Yosemite National Park, another climbing mecca, has grappled with apocalypse-level traffic congestion for more than a decade. Since 2018, the National Park Service has conducted "congestion assessments" at 21 popular outdoor areas across the country. It also created a toolkit that includes a list of potential solutions, such as adding transit and expanding bicycle or pedestrian access.

The boom in recreation creates a conundrum for park managers like Davey. While he's happy so many people enjoy Smith Rock, the landscape is fragile, and he worries about the impact to native flora and fauna.

"It's taking its toll on the facilities and the resources within the parks," Davey said. "We have a very sensitive soil structure out here in Central Oregon that a lot of people aren't aware of."

The situation becomes a balancing act between promoting recreation and protecting natural resources.

He and others at the park have noticed trails widening and people charting their own paths, both of which harm the ecosystem. Some of this is due in part to people trying to maintain social distance amid the pandemic, Davey said. Then there are those trying to get that perfect photo for Instagram. Signs around the park urge visitors to stay on designated trails and alert them to erosion control efforts. 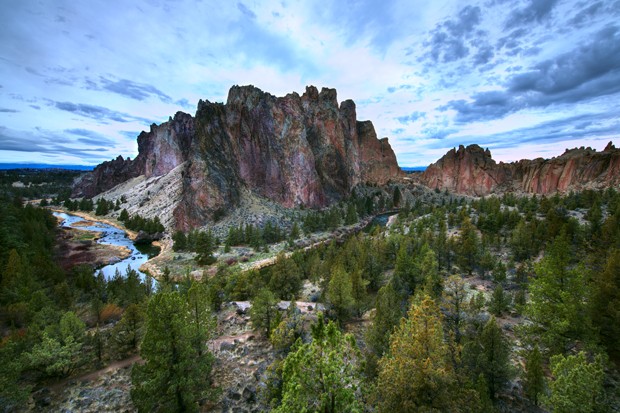 Smith Rock also hosts a population of raptors, namely bald eagles, golden eagles, falcons and ospreys, which build their nests in precipitous trees or on cliff faces. The park enforces seasonal closures to protect the birds.

Addressing the parking issue is part of a broader effort to update the state park's master plan, something that hasn't happened since 1991, according to Davey. The plan sets priorities for the park and outlines future projects.

A primary challenge to controlling capacity, Davey said, is that main access to Smith Rock is on a county road, Northeast Crooked River Drive, that the park does not own. Residents have homes along the road, so officials can't just cut off access when they run out of vacant spots. Davey said the park is thinking of building a welcome booth to notify visitors of the parking situation before they enter.

Another idea is to relocate parking off the county road and into consolidated lots with gated control points. Back in 2017, officials added an overflow lot with 100 parking spaces across from the visitor center. In the last year, the state park has added 26 parking spaces to the lot with the potential for more in the future, according to Davey.

For now, he and the Deschutes County Sheriff's Office want the public to keep in mind the burgeoning popularity of Smith Rock and to plan accordingly. Arriving early, coming on a weekday and having a contingency plan if parking is full are ways to avoid headaches and a pricey ticket, especially heading into summer.

As Janes said, "It's only going to get busier as the weather warms up."