Parking Pains are Only Beginning. Survey All Residents About How to Proceed with Old Bend Program | Editorial | Bend | The Source Weekly - Bend, Oregon

Parking Pains are Only Beginning. Survey All Residents About How to Proceed with Old Bend Program

This past week, the City of Bend's new Old Bend Parking District program got its first big test when the annual Munch and Music free event debuted once again in Drake Park. To the average person who biked or walked to the event, it was a grand success—a reminder of the power of human connection and the pleasure that can be found in seeing musicians play live on a gorgeous summer night.

But for those who opted to drive to the event, it was a lesson in how challenging Bend's parking woes are fast becoming. With the advent of the new Old Bend parking program, some streets that were once fair game for event parking are now blocked for visitors; some streets offer four-hour free parking; others two. Those who live in the area may just be getting used to what is allowed where—but for those Central Oregon residents who come to gather in that most public of public places —Drake Park—for these special events, the experience was confusing and frustrating—not to mention sweat-inducing when they found themselves having to walk far and wide to secure a parking spot and head back to the event. 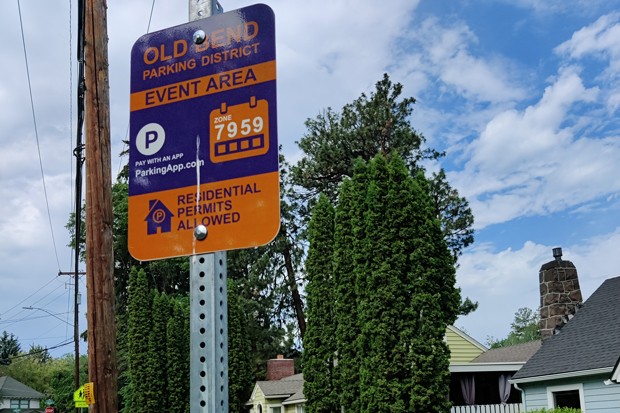 The parking program, as we outlined in a June 24 news story, was started largely at the request of the people who live in the area around Drake Park. The residents were the ones surveyed—twice already, and both times during the pandemic—about their support for the program, and they'll be the ones directly surveyed once again when the current pilot program expires and the City decides whether to make it permanent. It's easy to understand why the people who live closest to the throngs of floaters and the occasional free events in Drake Park might be asked to weigh in about how they felt about a new program limiting parking in front of their homes—but as City Councilor Barb Campbell so aptly pointed out during an earlier meeting discussing the program, the streets are actually a public right of way, owned by the public and not by the residents who happen to live along them. If the right of way belongs to the public, and Drake Park belongs to the public, why, then, were only the people in the well-heeled homes near the river asked to weigh in about the program? Must the people who live elsewhere in the city, who also pay taxes to maintain city and Bend Park and Recreation District properties, be relegated to second-class status when it comes to weighing in about how Drake Park and the surrounding area is managed?

City officials will tell you that people who do not live in the area will be able to weigh in during public comment periods at City Council meetings in order to make their voices heard on this issue. But will those comments—3 minutes in length—be weighed equally with the multiple surveys that City officials have, and will continue to deliver to the wealthy residents who live around the park (or who rent their homes as vacation rentals)?

There's no doubt that Bend is getting busier every year, and that parking is going to be an issue that continues to plague everyone. Parking fees are like crack for cities, once the habit is formed with parking permits now in place around Old Bend that add dollars to the budget, we'd be naïve to think those will just magically go away. So what's the average, occasional park visitor to expect?

We'd like to encourage people to drive less, but the reality is that the City is likely to need yet another parking garage very soon. Right now, pushing event-goers and park visitors farther and farther from their destinations to placate the residents who live in this dense area is unfair.

The parks and the public streets of Bend belong to the public, not only to a select group of residents. When this current pilot program expires at the end of this year, the City of Bend and its parking crew should endeavor to survey ALL residents (and taxpayers) of Bend about how they feel the program works and what should or should not be allowed to continue.