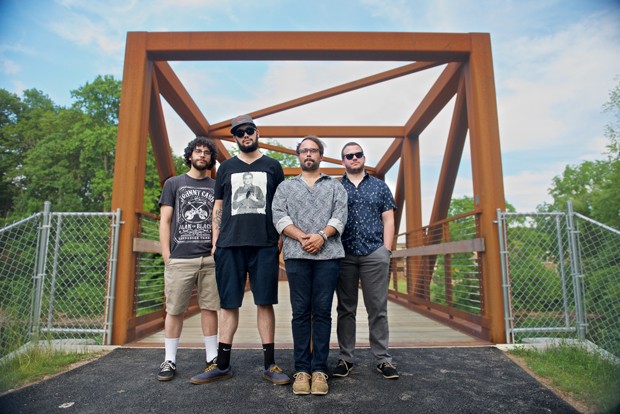 For The Hook's lead singer Carlos Barata, bringing his band to the Pacific Northwest is a second homecoming. The band hails from Pennsylvania, but for a couple years, Barata and his fiancee called Salem, Ore., home, a place they loved because it acted as the perfect middle-point to explore the Pacific Northwest, and the change of scenery they craved.

Early in 2017, tragedy struck when Barata's father, age 56, committed suicide. Within a month, Barata returned home to the Lehigh Valley to take care of his mother and reset.

"My father passed away and it was a crazy whirlwind of emotions," Barata says. "I was obligated to come back to the East Coast to take care of things; my mother is back here. It was kind of a full circle type of thing. The Hook Facebook page was still live, but hadn't been touched in years. A few weeks after my return, I touched base with our drummer, Chris Kondravy. He had just left the cover band he was playing in."

Youssef Moussa and Joe DiMarco joined Barata and Kondravy to form The Hook, which, as you can imagine, plays catchy music with great hooks. Barata describes the band's sound as reminiscent of Sublime, but with the post-punk garage sound of The Strokes.

"Life redefines itself, but then you have to redefine it as well," Barata says. "You can be mopey and super depressed, but I feel fortunate as a musician, as someone who can focus on playing music and part time things here and there. We're really trying to cut a break with this. It's been a year since we released this album."

The album, "Moonshine and Honey," comes as a tribute to Barata's father, with whom Barata would brew moonshine in the family cellar. Barata's father immigrated to the U.S. from Portugal, where sharing moonshine with friends and family is a strong tradition. Barata wanted to turn the negative experience of his father's suicide into a positive one by incorporating family traditions and the things he and his father loved.

"When we had our fundraising shows on the East Coast, we really wanted to make it apparent that you could turn negatives into positive situations," Barata says.

The album and tour have already helped raise hundreds for suicide awareness, with more on the way. "You can argue that it's maintaining someone's psychological well-being, that it's a common thread," Barata says of music. "We like being happy, we like being entertained—and with music you kind of have that guarantee every time you go see a band.

"It just seems like everyone is on cloud nine when they are listening to music. I think it could be a solution for a lot of the problems we're having. We're taking money away from the arts and mental health, from education; these are the places that drive hope, that inspire people, and we're not investing in it as much as we should."