Ahead of the publication of the 1st issue of Central Oregon Pets, we put a call out to local pet parents: Send us photos of your beloved friends to enter them into our first-ever Paw Pageant!

Rapid, who turns 4 this May, was a surprise bought for a set of then-tween twin girls, who had been asking their parents for a pup for quite some time. His family, the Chambers', fell in love with English Cream Goldens when their neighbors in Seattle had one.

Rapid's human dad is an avid kayaker, so he's named in homage to the river rapids his dad so often encounters. In keeping with his family's interests, Rapid loves to paddle board. (The family is proud to say Rapid hasn't tipped over anyone on a board—yet.) He also loves the snow, and performs a trick the family calls "flooding," in which he slides down the snow to get it all over his back. His top trick: running down the driveway each morning to get the newspaper. His fave hangout: The Lot—or any outdoor beer spot. Rapid's family also says he's very lovable and greets everyone with hugs. Find Rapid on Instagram @rapidthegoldendog.

Skip has come a loooong way from his beginnings as a street dog in South Korea. His human, Beth, says Skip lost his front leg after he was hit by a car while living on the streets. Beth adopted Skip from the local rescue, Street Dog Hero, which rescues and re-homes street dogs from places including Mexico and South Korea, among other locales. Today, Skip is a loving foster brother for other Street Dog Hero pups who are looking for forever homes.

Skip is a sweet, happy boy, who loves everyone he meets. Find Skip on Instagram @skipthetripod. 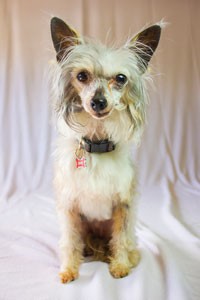 
One look at Lou Lou's lopsided smile and the staff of Central Oregon Pets was smitten, naming the 9-year-old Chinese Crested our Staff Pick. From her small size to her wild and carefree hair (just groomed over at Rhonda's Puppy Love, right before we took this portrait), her cuteness melted our hearts.

Lou Lou's mom, Emily, says she adopted her from a puppy mill in Fossil, Ore., when Lou Lou was about a year old. Emily says she's a total character—playful and as active or lazy as her human is. Lou Lou likes hiking, paddle boarding, camping and sleeping under the covers, as well as playing with her cat friend, Pickles, and her big sister, Tulip, a Doberman mix.

Lou Lou is a typical Central Oregonian, not letting bad weather stop her from being outdoors. When it's raining or snowing, Lou Lou rides in a backpack so she can roam and not get her feet wet. Lou Lou also has a seizure disorder, which Emily says is well managed by her awesome vets at Riverside Animal Hospital and the Bend Veterinary & Specialty Emergency Center. Find Lou Lou on Instagram at @louloudodo7.

Congrats to all the winners, who will take home gifts from Bend Veterinary & Specialty Emergency Center, dog bowls from Silipint, as well as gift cards from area businessess.