The 300-foot-long stretch of Minnesota Avenue between Bond and Wall Street is host to about a dozen businesses at the center of Bend's historic downtown. A proposal could transform it from a through street to a walkable community gathering space.

The Downtown Bend Business Association was commissioned by the City to create plans for the Minnesota Avenue Pedestrian Plaza, closing that portion of the street to traffic and adding amenities that would attract people downtown. City Manager Erik King came to the DBBA after the newest City Council was elected—some of whom advocate for increased walkability and bikeability in Bend. 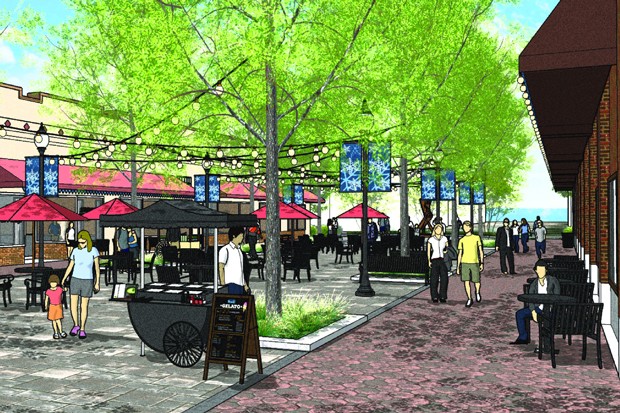 "There has been kind of this increasing chatter from the community coming in my direction, wanting more public spaces, spaces to gather walkable spaces in downtown," said Mindy Aisling, executive director of the DBBA. "So really, this came up in a response to community requests, and our community leaders' request."

The idea behind the project is that a community space would both attract and keep people downtown. When these plazas, promenades and pedestrian malls are successful, they often become one of the more attractive features of towns like Pearl Street in Boulder, Colorado, or Church Street in Burlington, Vermont. A CityLab study from 2021 showed increased interest for restaurants after they were converted into pedestrian friendly corridors through analyzing traffic on the app Yelp.

"One of the things that we've learned about public spaces is that the businesses along those spaces do spectacular because when people are walking by, when they're shopping, when they're hanging out longer, is when they have time to find something that they love," Aisling said.

There's a dual purpose to the plaza that it will be targeted to locals but will also be beneficial for businesses attracting tourists.

"One of the things that we hear from our merchants a lot is that they want to see more locals downtown. So we'd really be focusing on how can we make this kind of a center for some local organizations, local fundraising, and of course, it would also become a tourist destination," Aisling said. "We already know from Visit Bend statistics that almost 70% of visitors come to historic downtown when they visit here, I have no doubt that we're willing to invest in a project like this, it would be close to 100."

The plaza's designs were created by Szabo Landscape Architecture, and if followed would line both sides of the street with trees, create a stage at one end, a "focal feature" like a fountain at the other and fill much of the street with seating.

"One of the things that we learned during the pandemic, is how important the different types of businesses are to each other. When the restaurants were closed, retail suffered," Aisling said. 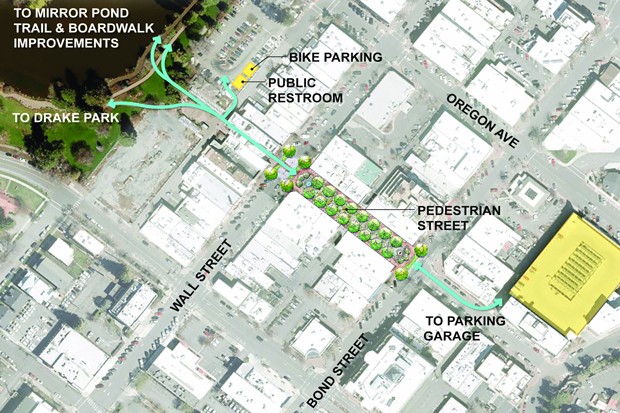 Aisling said she's gotten both support and opposition when speaking with businesses on Minnesota, and she's hoping that after speaking with stakeholder groups, going public with the design and addressing potential issues with the plaza, more people will be swayed. A meeting with stakeholders on June 11 led to three suggestions: That the City fund a comprehensive downtown plan, that the City commit to building bike parking and public restrooms by between Drake Park and downtown and a suggestion that the City incentivize the public to use the space.

"We're not looking at this with rose-colored glasses. What we're trying to do is look at a person's concern and say, 'how do we solve that?'" DBBA Board Member Ed Deenihan said.

Businesses' concerns include potential loss of accessibility for customers, collecting deliveries and potential vagrancy on the plaza.

"It seems like a cool idea on the surface and all of the surrounding bars and restaurants are pushing for it," the owners of Dudley's Bookshop Cafe, located on Minnesota, wrote in a Facebook post. "Who's against it? The majority of retailers on Minnesota, Dudley's included. 75% of Downtown retailers report a decrease in sales anytime there are street closures."

The DBBA said with its role keeping downtown clean it already has the experience needed to maintain a plaza.

"We believe that if we're able to keep it beautiful, clean and filled with positive programming, that will keep away any unwanted behavior that sometimes people are concerned with in downtown districts," Aisling said.

The programming would be focused on bringing a sense of vibrancy through the plaza through vendor programs, buskers programs and community events that showcase Central Oregon's diversity.

The plaza is in the very early stage of development and will need to be OK'd by the City before DBBA can move forward finetuning the proposal and seeking funding sources.

"There's a variety of other people, the City being number one, that we really need to engage with and get on board. That will take some time," Deenihan said.

DBBA will make its case to the Bend City Council on Wednesday. If they're supported they will move onto the next steps to create the plaza. If denied they will drop the project. Even if successful, the implementation of a pedestrian plaza on Minnesota is likely years away at this point.

"The answer is kind of that's unknown at this point, because it would take that next level of research to really identify a timeline and a budget," Aisling said.