Whole industries fought for survival after state mandates across the country sought to reduce exposure to COVID-19 last spring. Restaurants in particular scrambled to find ways to stay in business through carryout and delivery, but were largely unable to recoup their losses.

"Not every business model would have made sense to just go over to curbside pickup," Bend Parking Services Division Manager Tobias Marx told the Source. "Restaurants were hard hit with COVID-19, they were not able to have the occupancy that they needed to really sustain themselves." 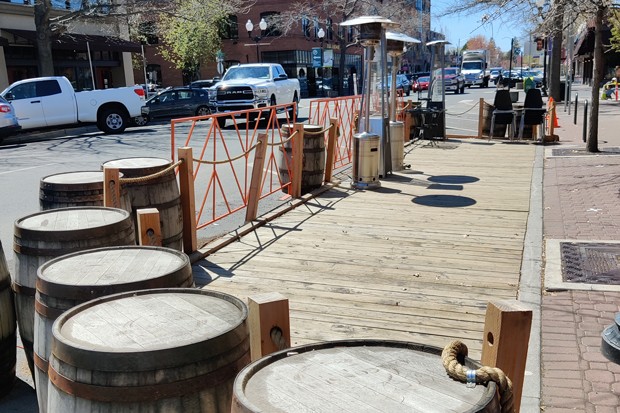 Under an emergency declaration the City of Bend implemented a "parklet" program that allowed downtown businesses to expand into the parking spaces directly in front of their locations. So far eight parklets, which refer to any non-parking use of parking spaces, were built for 12 businesses, with several filing joint applications. Nearly all parklets so far are made for outdoor dining, with a few exceptions like The Good Drop Wine Shop.

"Bos Taurus and The Good Drop Wine Shop, they kind of joined together because it was more feasible because it's a significant investment on a business," Marx said. "Moving forward with a more permanent program, it will open up more to commercial parklets."

The Bend City Council voted unanimously in favor of a permanent parklet license program at its meeting April 21. The program is restricted to the downtown district, and will allow for up to 90 parklets, 5% of all available on-street parking, to be converted to parklets. The eight parklets installed now take up 20 parking spaces, and Marx is confident that the expansion won't meaningfully impact parking in downtown.

"Even with that increased demand or requests for parklets than what we have seen before, we are still not even to half of that 90 spaces," Marx said.

Businesses applying for a license will have to meet certain requirements, including maintaining ADA accessibility, regularly maintaining and removing snow from their parklets, creating emergency protection plans, getting the parklet insured, securing approval from the property owner and be on a street with a maximum speed limit of 25 mph.

The counties deemed "Extreme Risk" by the state's guidelines, which were updated April 27, are prohibited from offering indoor dining entirely but allow up to 100 customers outside. Even at the lowest risk category indoor dining is restricted to 50% occupancy.

At Deschutes Brewery's downtown pub, its parklet spans the width of the building.

Most of the businesses that have invested in parklets expressed interest in keeping them after COVID restrictions have ended, both for the expanded capacity and for the character of a downtown area tweet this

"With the restrictions as they were and basically no inside dining, we're relegated to just to-go and delivery—and then realize with the opportunity of having the parklets when the city opened it up, we wanted to jump on it," Food and Beverage Director at Deschutes Brewery Mike Rowen said. "Really, we have more potential seating outside than we do inside right now under current restrictions."

Most of the businesses that have invested in parklets expressed interest in keeping them after COVID restrictions end, both for the expanded capacity and for the character of a downtown area.

"It adds a level of vitality to the downtown that, I guess to me, it makes it more vibrant, more special. Hopefully it will continue for a while because I think once everyone gets used to the idea and they see how active the streets are and how many people are drawn to it," Rowen said.

The program was warmly received over the past year by both businesses and residents, with the city's Licensing Program Manager Lorelei Williams saying they had received a "very minimal" number of complaints.

"So far we I think if we hear from the community, from the majority of community, they're really enjoying these parklets and enjoy that they could support downtown businesses," Marx of Parking Services said.

After 2021 the city will review the parklet license program and assess whether it should continue—or even expand.

"This is not a program that you can, I think, say generalized would work all over the city. I think it can work in very certain business districts and in some areas it might not," Marx said. "I think we want to see how did this work for the 2021 season until the end of the year, and during that process do a lot of community outreach with local businesses that are doing parklets and local businesses that are not doing them and to really hear from all sides. Does it work? Does it not work? How does it affect your neighbor, meaning a business?" Marx said.

Marx said there could be opportunities for more parklets in Northwest Crossing, on Newport Avenue and, if parking pains can be relieved there, on Galveston Avenue as well.