Permits Required: How's that Going for Ya?

There's been enough to go around during the early hiking season, but that could change

As trail lovers likely already know, the U.S. Forest Service changed how to access the most popular trails in Central Oregon this year to limit the widening of paths and the destruction of wilderness. The new permitting system introduces a $1 fee for day use in 19 of Deschutes' National Forest's 79 trails, and a $6 overnight permit.

The traffic on these trails has steadily increased over the years, from 1.8 million in 2013 to nearly 4.5 million last year. The forest is more traveled than most national parks. 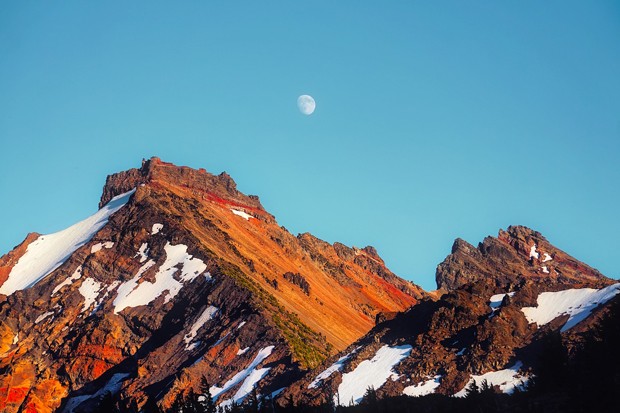 "Back in 2017, we started an environmental analysis process to look at solutions for five wilderness areas: Mount Jefferson, Mount Washington, Three Sisters, Diamond Peak and Waldo Lake wilderness, because what we saw was we were getting significant vegetation damage to sort of some alpine areas within these wilderness areas," said Jean Nelson-Dean, public affairs officer for the Deschutes National Forest.

The program was slated to start in 2020, but with uncertainty related to COVID-19 it was delayed to this year. The Diamond Peak and Waldo Lake wilderness areas were considered safe at current usage, and they'll keep the system of free, self-issued permits available at trailheads that's present at Deschutes' 70 other trails.

"One of the other aspects that we're trying to work on is just also having information for folks about some other great trails," Nelson-Dean said.

Twenty to 50% of day-use permits for those 19 trails were released on April 6, depending on the trail. The remaining 50-80% will be released throughout the season, with permits for the next seven days available on a rolling basis.

"It's a constant rolling window. So if it was July 1, and you thought, 'hey, tomorrow, I'd like to go hiking,' you can look and if there's permits available, you can reserve for that day, or any time within that seven-day period," Nelson-Dean said.

These are the type of passes most hikers will need to use, since the permits released in bulk at the start of the season have largely dried up.

"There's not many, the majority are gone. I know that there are some depending on the location," Nelson-Dean said. "Last I looked, there were a couple in September for some places, but right now, the availability is really within that seven-day rolling window."

Hunters, working volunteers and people hiking the 455-mile Pacific Crest Trail in Oregon are exempt from the permit process.

"That was sort of a thing where somebody already has a permitting process that they need to follow and it's a fairly small group of people with that exception," Nelson-Dean said.

Nelson-Dean said the permits will not be aggressively enforced in 2021 so people can get adjusted to the new system, but a $200 fine could be issued to anyone who has obviously and continuously not followed the forest's rules. So far there have been few conflicts, especially since this early in the hiking season there's usually enough permits to go around, she said.

"On the ground, it's going pretty well. They've just had to work with a couple folks who didn't know about the permit system and there wasn't availability," Nelson-Dean said. "I'm sure when it gets to July and August there may not always be availability."

The impact of the permitting system will be studied continuously by the Forest Service, but it's unknown what restoration will look like.

"Who knows, but I don't think in 10 years, people are going to stop going into the wilderness areas and wanting to hike and things like that," Nelson-Dean said. "There's no plan once we start seeing improvements, we're not going to open the floodgates again, let them get damaged, then close it up again, and start over. The goal is to maintain these for future generations."

Related Think You've Hiked It All in Central Oregon? Think Again.: Use this first *almost*-post-COVID summer to re-examine some local favorites with new eyes

Think You've Hiked It All in Central Oregon? Think Again.
Use this first *almost*-post-COVID summer to re-examine some local favorites with new eyes
By Jamie Dawson
Local News