Bo Burnham is alone inside

"I don't know about you guys, but, um, you know, I've been thinking recently that...that you know, maybe, um, allowing giant digital media corporations to exploit the neurochemical drama of our children for profit ...you know, maybe that was, uh...a bad call by us. Maybe...maybe the...the flattening of the entire subjective human experience into a...lifeless exchange of value that benefits nobody, except for, um, you know, a handful of bug-eyed salamanders in Silicon Valley...maybe that as a...as a way of life forever...maybe that's, um, not good. I'm...horny." 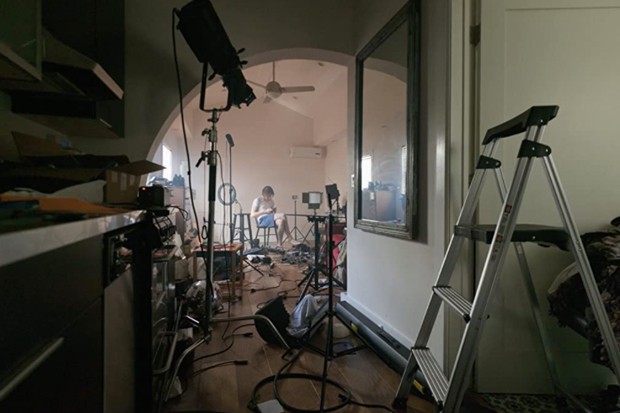 Bo Burnham is a genius. I'm just gonna say it right up front so you know where I'm coming from. I was never a big fan of his early YouTube work because it felt like a crass remixing of Jon Lajoie and Weird Al, but after 2016's comedy special "Make Happy," Burnham transcended the singing jokester routine and became something entirely different.

With his new (I won't call it a comedy) special, "Inside," Burnham looks at about a hundred million different things and deconstructs them to the point of absurdity. See, Burnham recorded the entirety of "Inside" while quarantined at his house, shooting basically the entire film in his guest house over the course of a year. All alone. No crew, no camera operator, just Burnham himself, a bunch of cameras, lighting equipment and a staggering amount of anxiety.

For me, the most important thing that "Inside" does is ask a very simple question about 50 different ways so that no one watching can miss it. How are you coping? That's it. During the filming of "Make Happy," Burnham started having crippling panic attacks while onstage, leading him to stop performing live for five years. He spent all that time working on his own mental health and just trying to get better. In January of 2020 he decided he was well enough to start performing live shows again and right as he was about to begin, COVID landed and sent him back inside with only his thoughts for company.

And sure, many people had it much, much worse than Burnham did, with his rich, white anxiety and ability to reach out to millions of people if he wanted to, but Burnham is also smart enough to know that his privilege definitely cushioned his landing and that he would make a large chunk of money recording himself in quarantine. There's even a song or two about it.

Setting the entire film in one room gives the entire special a claustrophobic feeling that acts as a visual representation of Burnham's mental health. Throughout "Inside's" 87 minutes, Burnham's hair and beard become longer, wilder and more unkempt. His songs become less guarded and the jokes become almost defensive, like he knows he's supposed to be making a comedy special but doesn't feel like laughing is very important at the moment. There's even a song or two about it.

Burnham isn't coping well. He spent a year in a small house feeling desperate to get back out in the world and be a part of everything again. But as things start going back to normal, the sun is brighter than he remembered, and the sky is so much bigger than he thought. Maybe he's not as ready to go back out into the world as he imagined. To me, that's the biggest message that "Inside" imparts—that it's OK if you're not ready to rip the mask off. That even as you're inside your house or your room or even yourself, that you're not really alone.

Bo Burnham isn't a genius because of his writing or his singing. He's a genius because he knows he has a giant audience and made a 90-minute movie of himself being ugly and scared and stupid and vulnerable and beautiful. Every minute of "Inside" is him trying to heal in a very public and messy way. Maybe being a genius is just being emotionally fearless and giving everyone else permission to be the same. That's good enough for me.

Inside
Dir. Bo Burnham
Grade: A
Now Streaming on Netflix