You've probably heard the phrase, "Adopt, Don't Shop"—a reminder to us humans that plenty of existing pets out there need a good home. Here, Central Oregonians talk about the many ups, and the occasional downs, of adopting and/or "rescuing" their pets from a shelter. 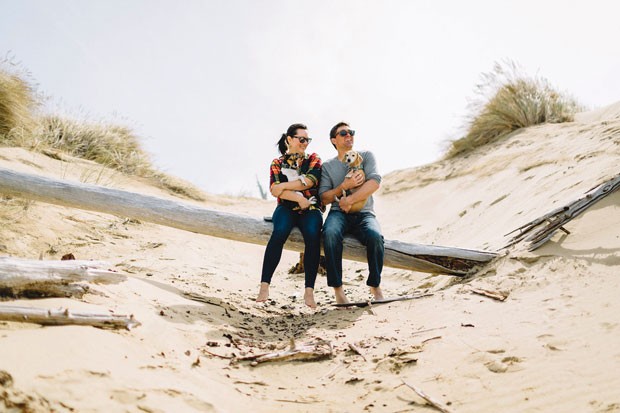 Why: We adopted Stella because we were finally ready for a dog. Then we wanted a sister for Stella and had always wanted a Jack Russell.
Challenges: Stella rage chews and shreds various things around the house if she doesn't get designated attention. Ruby has lot of anxiety and stress eats when confined (Carhartt jacket, sheets, rope balls, crates...).

What we learned: We always want to have two, since they rely on each other a lot, but we'll only ever have one per human, so they get the appropriate attention.

Why: I have always loved animals, and I had a lot of pets growing up—hamsters, rabbits, cats, a turtle and one dog. I knew as an adult that I always wanted my own dog, but I lived in an apartment and worked long hours. So, once I went freelance and was in the market for a house, I started searching all of the adoption websites. As soon as I saw the photos of Jackson, I knew I would adopt him. The timing worked out, and the rest is history!

Challenges: I had fallen in love with Jackson from his photos, and from meeting him, but he was reactive on a leash. The shelter told me I would need to take him to a trainer. We did four sessions, and he greatly improved over time, until we moved to Bend. He seems to have reverted back to being reactive to large dogs, so we are still working on it.

What I learned: I've learned that any pet can have "issues," but you need to be willing to do the work. I got lucky and didn't have to potty train Jackson, since he was a year old when I adopted him, but there were other things we had to work on. But I learned that he is full of love and is just so happy to be around me. You can't buy that.

Why: (From Liz) I was living alone and wanted a buddy, I grew up with a cat who was my best friend and have always loved the company and personality of cats – aloof yet snuggly, independent yet total love bugs. Greg adopted Maggie when he was living by himself in a cabin in the woods." It was love at first sight, she came up to me and that was it."

Challenges: When we all moved in together, integrating as a family took time. For the first six months Arlo took a LOT of space for himself; I was a little worried. Now Arlo and Maggie are siblings and best friends. They hang out, they annoy each other, they play, we call them "Charlie Brown and Lucy." Our bed is a big ol' cuddle puddle every night.

What we learned: I learned what unconditional love is. I have opted to hang out with Arlo many a time rather than people – he has a really silly, endearing personality. I had an animal whisperer communicate with him once. Evidently, he has no idea he's a cat and I'm a person. He thinks we are just great roommates. Greg learned that dogs are pure love and that little Miss Maggie has the biggest heart in the world. 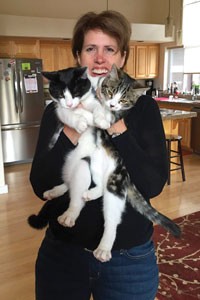 Why: We each had two kitties when we met 20 years ago, and so we blended our feline family. Though four were a lot of cats to have, they all were adored, and lived to be 18 to 21 years old. When our last kitty Olivia passed, we felt like we'd like to live without pets for at least a year so we could do some impromptu traveling.

Instead, a few weeks after Olivia's death, we saw a Facebook post from CRAFT Cat that showed a mama kitty and her two adorable kittens. CC were calling out to the community for help to take care of medical costs for the mom, as she had sustained serious injuries before arriving at CC. We brought the family home to get the mama through her surgeries, and get the kittens on track for adoption, but we knew better.

A few years before our last two kitties had passed, Lori had developed a chronic disease that made her much more homebound. She was grieving the loss of her health as well as the loss of her beloved kitties. The introduction of these sweet, playful furballs brought a renewed spark to her life and helps to keep her in the moment.

Challenges: LOL, where do we start? Adopting siblings, they are of the same age, so there is a lot of racing around the house, chasing and play fighting. It's been hard to host relaxing evenings with friends while we have cats tearing around and leaping off furniture. Entertaining, but we wouldn't say relaxing. They're almost four now and maturing, so we'll be able to have people over soon.

What we learned: That we believe we'll never be without a pet. We feared that getting our latest family so soon after was a replacement of our last kitties, but they're not. They improve life so much. Suffering from a chronic illness, I'm acutely aware of how much "therapy" they provide. Pure joy. Adopting a family is like watching Wild Kingdom, Domestic version. Every dynamic in the wild cat life happens in the confines of our home, which is entertaining and enlightening. They are definitely animals! 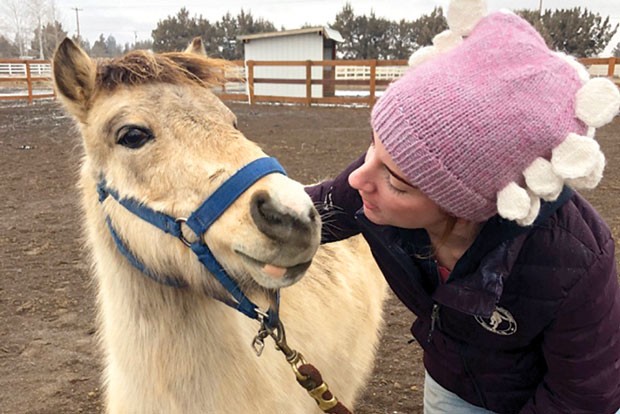 Why: We wanted a pony and knew we wanted to adopt. Al Capone was headed to slaughter, and Three Sisters Rescue bought him back from a kill buyer and we adopted him.

Challenges: He hasn't been handled much and when he was, he was mistreated. Luckily, we are expert horse handlers so he's doing well. His teeth were never done, they had to be floated. He's just been neglected but he's really good. They made him sound like a devil pony, but he's been pretty easy.

What we learned: Each adopted pet comes with their individual challenges and you don't know their background. Adopting doesn't necessarily mean they are bad, but they could have been mistreated or mishandled.