Robots vs. monsters means we all win 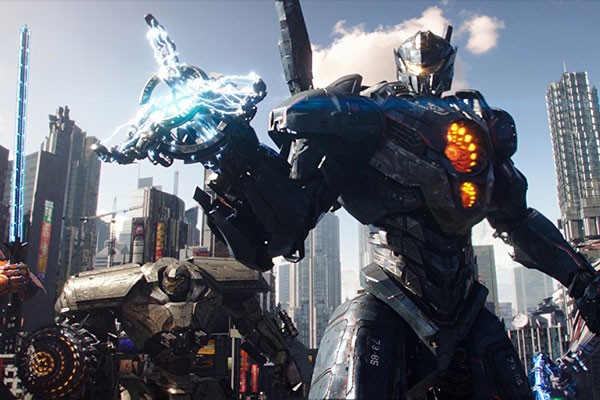 I'm a simple man, but I take pleasure in some very specific cinematic delights. I love giant, Godzilla-esque kaiju monsters. I also love several-hundred-feet-tall, mech-suited robots. So back when visionary director Guillermo del Toro announced he was making a movie about huge alien sea monsters entering our world through an inter-dimensional portal on the bottom of the ocean and fighting enormous robots with human pilots... I was a little too excited.

Before "Pacific Rim" was released, I knew the names of all the robots (called Jaegers in the film) and already had my favorite ones picked out. I obsessed over the kaiju designs, arguing with my friend about which ones looked amphibious as compared to the ones that would fly or burrow.

Then "Pacific Rim" came out and it sucked. Del Toro's love of creatures and world building was on display, but the script was riddled with cliches and the characters piloting the Jaegers were one-note and boring. Charlie Hunnam was wooden as hell and, as much as I still loved watching robutts and munsterrz going pewpewpew, the movie had the momentum of a stifled sneeze.

Del Toro built the beautiful world of "Pacific Rim," but "Pacific Rim: Uprising" actually gets to play in it. Gone are the boring characters, replaced with another soulful and weirdly high energy performance from "Star Wars'" John Boyega. He's teamed up with the son of Clint Eastwood, a badass teenage girl and a brilliant Chinese futurist, all of whom are more interesting than Hunnam's dead-eyed stare or Idris Elba's valiant attempt to make bad dialogue sing.

Ten years have passed since the original and no more kaijus have come through the portal. The massive robots sit quietly in their hangers even as new generations of pilots train for the inevitable incursion from deadly monsters. Boyega plays Jake Pentecost, son to Idris Elba's heroically dead Stacker Pentecost. Jake just wants to make a living stealing and selling Jaeger parts on the black market and floating in the pool behind the half-destroyed mansion he's squatting in.

A never-before-seen Jaeger comes from the ocean and starts destroying cities, so Jake and his band of rookie pilots must not only fight another giant robot, but also another legion of terrible monsters on their own genocidal mission.

"Uprising" manages to be entertaining in all the ways the original failed to be. Del Toro is obviously a more meticulous and nuanced director than Steven S. DeKnight, but DeKnight realizes he's playing in someone else's sandbox and gets to knock down as many castles as he wants to. Plus, Del Toro has been busy making movies about sexy fish people.

"Uprising" isn't a masterpiece by any stretch of the imagination, but it's damned fun in the way that most $150 million Hollywood movies usually aren't. The film is silly and dumb and falls apart the longer you think about it, but I had a smile on my face for every minute of its stupidly entertaining running time. Sometimes that's really all we need.