A lifeline arrives for local arts and culture organizations

A recent stream of funding may save some of the state's most beloved arts institutions from an almost certain death.

In an unprecedented move, the Oregon state legislature allocated $50 million in coronavirus relief funding to venues, cultural nonprofits and performance organizations. In Deschutes County, the bounty of $1.7 million is distributed among organizations as varied as the Volcanic Theatre Pub, the High Desert Museum, the Sisters Folk Festival, World Muse and the Deschutes County Historical Society, among others.

Many arts organizations and businesses had to close their doors and cancel programing, fundraising and other events during the height of the coronavirus scare.

"We would have been in a very rough place without this grant," said Derek Sitter, owner and operator of the Volcanic. "I don't see how many of us would have survived. I'm hopeful that this will get us through April until we have some regional and national tours return. It did save us for now. Venues across the country are dropping like flies. It's heartbreaking."

"They [arts organizations] were the first to close and will be the last to reopen," said Brian Rogers, the executive director of the Oregon Cultural Trust, the organization that handled the grant process for the funds. "Just about all of their activities are focused on public performances and workshops."

Oregon is for arts lovers

The money is part of the $2.45 billion given to the state through the Coronavirus Aid, Relief, and Economic Security Act passed by the federal government in late March. The guidelines for grantees were based on restrictions written by the U.S. Department of the Treasury. Funds were only available for losses and expenses incurred directly as a result of the coronavirus.

After a rushed grant-writing period focused almost exclusively on the balance sheet, 27 cultural nonprofits and for-profits in Deschutes County qualified for the state's coronavirus relief grants.

"Oregon is the only state to my knowledge to allocate this level of financial support for arts and culture with CARES Act money," Rogers said.

So far, only a few other states have come through with any coronavirus relief funding at all for the arts. Utah gave $9 million to its largest cultural organizations and Vermont appropriated $5 million to its state arts council.

"Recognizing the essential role arts and culture play in building and maintaining a healthy society is not something states typically do in a crisis," said Cate O'Hagan, the co-chair of the Deschutes Cultural Coalition, which helped OCT with the grant distribution. "Oregon has in an unprecedented way."

"Right now, the Sisters Folks Festival, and many, many arts and performance organizations… we’re hemorrhaging and this is a Band-Aid. But we have no idea what 2021 will hold."— Crista Munro tweet this

But she added later, "Historically, Oregon has been in the bottom 25% of states for funding for the arts."

For the fiscal year 2020, Oregon ranks 39th out of the 50 states in funding for state arts agencies, at $0.46 per person, according to the National Assembly of State Arts Agencies. Compare that to Minnesota, which ranks first at $7.22 per person.

"During a recession, we're often the ones that take the biggest mortality hit," O'Hagan said. "Arts are the last to be funded, and social services become the priority."

Due to the efforts of various arts lobbying groups and an economic impact study of the arts by OCT, the Oregon legislature's Emergency Board decided to create a $50 million Coronavirus Relief Fund Cultural Support fund in July. It gave half the money to venues and major institutions like the Oregon Shakespeare Festival (which received $4.7 million) and the High Desert Museum ($700,000). The other half went to 621 cultural organizations in Oregon, and was distributed by OCT's partners in each region, like the Deschutes Cultural Coalition in Bend.

Nearly $1 million from that second bucket was awarded through a grant process to two dozen organizations in Deschutes County, including Sisters Folk Festival ($194,998), BendFilm ($81,148), Cascade School of Music ($51,393) and the Source Weekly's sister company, Lay It Out Events ($44,337). The Tower Theatre ($269,881) was one of only a handful of organizations in the state that was awarded over a quarter of a million dollars.

"The grant is incredibly generous and appropriate and will help us enormously over the next several months," said Ray Solley, the executive director of the Tower Theatre Foundation. "The irony of course is that our losses and expenses from March through December 2020 approach $800,000 when you count lost sponsorships, memberships, rentals and ticket sales compared to the same period last year." 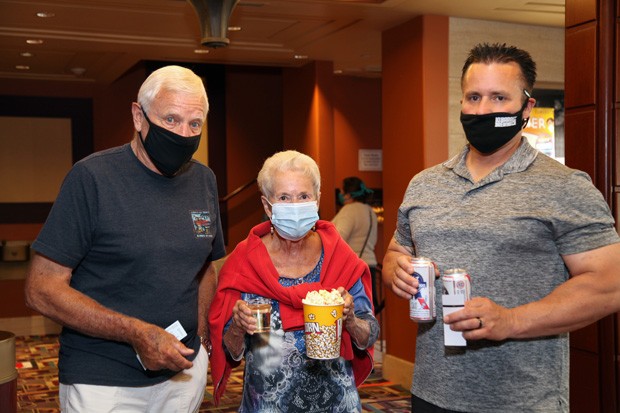 Still, Solley was ebullient about the future, referencing the "gratifying groundswell" of support from members who donated extra in June and said they wanted to make sure the Tower was still there when the pandemic was over.

In the meantime, the Tower is currently hosting performances for around 80 people, filling the theater to less than 20% of its usual capacity. Right now, its staff is working on overhauling its educational program to provide online resources and aggregated video performances for students in the community learning from home, Solley said.

For the second time in four years, SFF had to cancel its biggest event of the year due to wildfire smoke. This year's socially distanced Close to Home concerts—a replacement for the normal weekend festival—scheduled for Sept. 10-12, had to be canceled last minute. As of Monday, the nearby Lionshead Fire was 34% contained and had burned 200,000 acres and 264 homes. Two weeks ago, it joined with the Beachie Creek and Riverside Fires to collectively burn half a million acres in one megafire stretching from the Warm Springs Reservation to the suburbs of Portland.

SFF received $194,988 in relief funds from OCT. The money will help make up for severe revenue shortfalls as a result of the canceled festival, which was already scaled way back to adhere to COVID protocols. The annual festival is the main money-maker for the organization's year-round programs in the Sisters community and schools, said Crista Munro, who took over the executive director position in May of 2019. According to a press release, the OCT funds will cover 53% of its losses for this fiscal year. 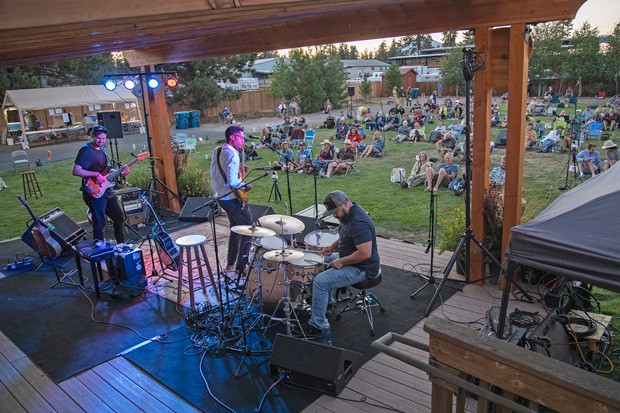 "Right now, the Sisters Folks Festival, and many, many arts and performance organizations... we're hemorrhaging, and this is a Band-Aid," Munro said. "But we have no idea what 2021 will hold. Many businesses are able to operate at a reasonable capacity, but we're not in that bucket."

In December, SFF finalized the purchase of the Sisters Art Works building, finishing off a two-year $1.4 million fundraising campaign. The 10,000 square-foot lawn behind the building is now the organization's largest festival venue. For the foreseeable future, it provides a place where the community can safely gather outdoors.

In August, SFF ran two creativity camps for kids in cohorts of 10 students, and it was able to offer some scholarships through the Family Access Network. The staff has plans to continue this type of programing into the school year, providing an option for parents on Fridays, when Sisters schools are closed to prevent the spread of the coronavirus.

The leaders of the arts and culture sector of the economy are not historically known for their political power plays, so the fact that they banded together in Oregon to win millions from the state is a story unto itself.

One chapter begins with the Independent Venue Coalition, founded by Jim Brunberg, the owner of Mississippi Studios in Portland, which represents 100 independently run concert spaces in Oregon. IVC lobbied state officials this summer for music industry-specific financial help. In the end, 78 venues were part of the $50 million bailout, including the Volcanic Theatre Pub in Bend, which received $50,501. Many will receive enough to cover expenses for seven months, with grants totaling $9.7 million for venues across the state.

Meanwhile, a study by OCT published before the state's emergency board met to distribute CARES Act funds, also had a major impact. In an effort to evaluate the financial fallout from COVID-19 on the state's arts and culture sector, OCT surveyed 330 organizations. It estimated a $40 million loss with an average loss of $121,281 per cultural nonprofit through June 30.

The Oregon legislature formed the OCT in 2001: A new law created a 100% tax credit for donations to the OCT. It's not a deduction; instead, every dollar donated is refunded directly to taxpayers. The only catch is taxpayers must also support one other cultural organization on OCT's list. In 2017, it brought in $4.7 million and put 60% of that back into cultural organizations throughout the state with grants and invested the rest into a permanent fund.

The Emergency Board decided OCT was the best agency to handle the distribution of the $50 million, given its long track record and infrastructure, said Brian Rogers, OCT's executive director. One nuance of the funding is that smaller organizations with smaller budgets were awarded more money proportionally to cover their expenses than larger ones. In Bend, that meant the BEAT Children's Theatre got $43,667 and the Sisters Rodeo Association got $32,789, for example.

That funding structure was intentional, Rogers said. It was set up that way by Gov. Kate Brown, OCT board of directors, Business Oregon and the legislative sponsors of the bill to make sure that relief money reached less densely populated areas where access to funding and resources is more of a challenge.

"Many cultural organizations and institutions have closed their doors to help keep us all safe during this pandemic," said Brown. "These grants will mean that more than 600 Oregon arts and culture organizations across our state's counties and Tribes will be able to keep up their vital creative work. Everything from museums to fairgrounds to the summer events we all know and love can continue to enrich our lives—connecting us to one another and giving us the hope and inspiration we need."