Bend Pickleball Club hosts players from all over the U.S.—including a much-younger crowd than in previous years

Founded in 2013, the Bend Pickleball Club was formed to provide more ways to play the beautiful game here in Central Oregon – which is exactly what they did. In partnership with the Bend Park and Recreation District, BPC raised money and help build 16 new pickleball courts at Pine Nursery Park. And that's where the 2019 Central Oregon Classic will take place. 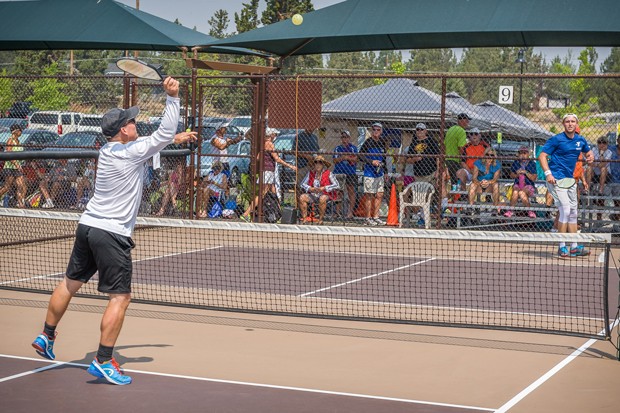 "The Classic brings players from all over Oregon and the U.S. to Bend and gives local players a chance to see how they rate against other pickleball enthusiasts," BPC President Kirk Foster told the Source. "It is an opportunity to make new friends and to visit and play with old friends all while honing their pickleball skills and participating in exciting and challenging physical activity."

Formerly a part of the Oregon Senior Games, the Classic will serve as its own USA Pickleball Association-sanctioned event this year – which means the tournament is now open to players 12 and up, allowing for a greater variety in style of play and overall a greater participation. As of this writing, 290 individual picklers are signed up to participate in the Classic.

"The sport of pickleball was embraced early on by an older range of players who found that other types of court games may have been too tough on aging bodies. In a very short period of time, we have seen interest in the sport increase among younger players who recognize the game is physically and mentally challenging in addition to being fun, competitive, and a great way to socialize," says Foster. "Opening the tournament to younger players increases local interest in the sport and gives our younger players the same opportunity to experience challenging competition in a local event. We welcome players of all ages and really encourage teens to get involved."

If you haven't hopped on the pickleball train yet, or aren't even sure what the sport is, here's a quick rundown:

Pickleball is a paddle sport that combines different game elements from tennis, badminton and table tennis. It is usually played in singles or doubles formats, but sometimes in P.E. classes teachers will use full courts of two large teams to get everyone involved. Using a wooden paddle, the goal is to hit the ball back over the net (into the service zones) to the other team to try to score. The sport actually got its start in the Pacific Northwest, being founded in 1965 by Joel Pritchard, Bill Bell and Barney McCallum on Bainbridge Island, Washington.

As Foster mentioned, one of the best things about the sport is that it's accessible to people of all ages. For anyone from retirees, elementary students, to parents or young adults – pickleball is really a game anyone can pick up at any time. BCP's communications director, Elena Horton, had never even heard of pickleball before she started playing. In her board of directors bio she actually mentions figuring out that she had "NEGATIVE" ability at the game, but fell in love with it nonetheless and kept on working to improve.

Foster also picked up the game on a whim.

"My wife and I moved to Bend about seven years ago and knew only a few people in the area. During our first winter here, we were introduced to pickleball through the Bend Pickleball Club, which at that time was about 80 members. We found pickleball to be a great social activity in addition to all of the benefits of mental and physical exercise," Foster recalls. "Pickleball has been a great experience for us by keeping us physically and socially active and introducing us to many wonderful people that we may never have otherwise met. I know that there are hundreds, if not thousands of people in the community who would voice the same or similar experiences."

Today the BCP has nearly 800 members—a staggering growth since the inception of the club only around six years ago. If you think Pickleball might be something you want to check out, it's clear you're not alone. Head over to the Classic this weekend to really see what the game is all about and cheer on as hundreds of picklers hit the courts.