Our music writer tells you what she's most jazzed about for 2018. See what we did there? 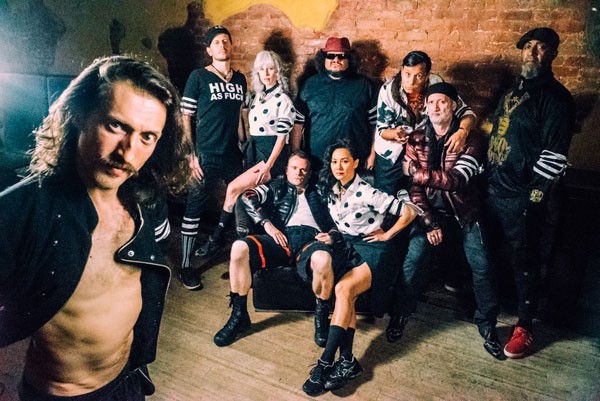 On the horizon of a new year, 2018 is already shaping up to be an INCREDIBLE year in music in Bend. Yes, that deserved all caps—it's THAT good. While not all of the best shows are listed below, I've gone through and found the best of the best, my picks for can't-miss shows that are coming to Bend this winter. From the prime minister of funk himself, George Clinton, to "Getting Ready to Get Down" with Josh Ritter, there will be NO shortage of quality jams in town this year.

HIP-HOP/JAZZ — This may be one of the best bands you've never heard of and they are playing in Bend FOR FREE! That's right, head down to McMenamins and enjoy the unique hip-hop-meets-jazz sounds of The Lique. The band hails from Las Vegas and brings its high-energy sound to Bend for an evening of infectious dancing you won't want to miss. Gather your pals or a stranger (because its 2018 and you can try something new) and get ready to dance your snow boots off to The Lique. Look for my interview with the band next week. // 7-10pm. McMenamins Old St. Francis School, 700 NW Bond St., Bend. No cover.

FOLK/ROCK — I don't know if it's because "Getting Ready to Get Down" has a permanent place on my housemate's playlists or if it's just the genuine, raw talent that oozes from singer/songwriter Josh Ritter, but this will no doubt be a "can't miss show." Singer Nicki Bluhm joins Ritter and the Royal City Band for a memorable evening of music that's part of the Sisters Folk Festival Winter Music Series. Fingers crossed he plays "Kathleen," one of my personal favorites — "All the other girls here are stars, you are the Northern Lights." So, so good. // 7pm. Sisters High School, 1700 McKinney Butte Rd., Sisters. $15-$60.

GYPSY/PUNK — This may be the show I'm personally most excited for because if you're a fan of San Francisco gypsy-punk rockers Diego's Umbrella (local favorites who play the Apres-ski Bash at The Commons on March 9), you'll love Gogol Bordello. The band formed in 1999 on the Lower EastSide of Manhattan and has since made a name for themselves with a theatrical stage show, constant touring and signature sound that blends gypsy rhythms with a punk rock mentality. Buy your tickets now, this show will be one for the record books. // 9pm. Midtown Ballroom, 51 NW Greenwood Ave, Bend. $31.

SURF ROCK — Fans of singer/songwriters Jack Johnson and G. Love should be stoked for the announcement of Donavon Frankenreiter at the Domino Room. Why? Because Frankenreiter has opened for Johnson in the past and most recently worked alongside G. Love on the JAMTOWN project. Frankenreiter, a surfer himself, sings soft, relaxing surf-rock that will no doubt have you swaying to the beat while his soulful vocals and sincere storytelling will leave you hooked and wanting more. Enjoy that surfer's high you'll get from listening to Frankenreiter, similar to that feeling of catching a gnarly wave in Hawaii, or so that's what they tell me anyway. // 8pm. Domino Room, 51 NW Greenwood Ave, Bend. $20/adv at Bendticket.com.

FUNK — Yes! This is happening! One of the most anticipated shows of the winter, funk king George Clinton brings Parliament-Funkadelic to the Midtown Ballroom. For funk lovers who are over the age of 21, dance and sweat like you never have before. Witnessing the "prime minister of funk" live should be on any music lover's bucket list and now you've got your chance. Contrary to the title of one of our fav P-Funk songs, don't "Give Up the Funk," embrace it with the master himself. // 8pm. Midtown Ballroom, 51 NW Greenwood Ave, Bend. $35/adv, $40/door.

*CORRECTION: Updated Jan. 6 to reflect the correct date of the George Clinton show is March 22, not March 15. We regret the error.