Do you remember Zima? I don't, as I was only 3 when Coors Brewing Company introduced the light, lemon-lime flavored alternative to beer. Considered a "premium malt beverage," drinks like Zima, Mike's Hard Lemonade and Smirnoff Ice had their day... and then their popularity plummeted.

But why? It could be because they're high-calorie, insanely high in sugar and will leave you with the kind of hangover that says, "A dozen frat boys taped two 40-ounce bottles of Mickey's to my hands last night." 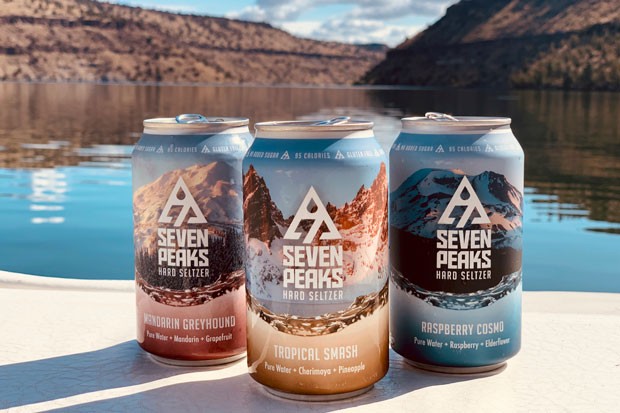 Enter hard seltzer. This adult beverage appeals to consumers for a variety of reasons. Lighter and lower in calories than beer, it's a great alternative for those who are looking to cut back on heavier beverages, often while enjoying the convenience of a can.

These are a few local options that let you go beyond White Claw.

"Modified Theory is a tart and sparkling hard bevy," Erin Rankin of Deschutes Brewery wrote in an email to the Source. "It is 5.5% ABV with no to low sugar (depending on the flavor), natural ingredients and no preservatives. Our goal was to create a versatile drinking experience that you can sip it from the can, drink on the rocks, or mix it with your favorite spirit. We've created three bold flavors, including Tahitian Lime Agave, Northwest Berry Lavender and Tarocco Orange Vanilla."

Modified Theory is crafted to remove gluten. Veronica Vega, director of product development at Deschutes, noted the inspiration for the beverage came from a cocktail-consciousness. "We've been experimenting with beer cocktails at our pubs for a while," she said. "We wanted to come up with some tart, fruity and interesting flavors that lend themselves to quick and easy cocktails. Versatility is an added bonus. We started experimenting about a year ago, and we currently have three more flavors in development."

“Some see the rise of hard seltzer as an evil trend, a trend that we shouldn’t even indulge in.”—Sean Lampe of Immersion Brewing tweet this

Family-owned and locally-loved Immersion—which took home Best Small Brewery at the Oregon Beer Awards this year—is hopping on the seltzer bandwagon, quite literally.

"The trend really dates back to Zima," said brewery co-owner Sean Lampe. "There's been this huge revival in the past year, and it's become pretty impossible to ignore it." Lampe explained that he and his brewers began experimenting about a year ago, and it's been quite a learning curve. "Some of the brewers are onboard, and others aren't," he noted. "Some see the rise of hard seltzer as an evil trend, a trend that we shouldn't even indulge in. But, you know, it's something new to try. We've been dabbling a lot with the fermentation process, and while there's still lots of room for improvement, I can really see this product having legs."

The batch currently at the brewery is grapefruit flavored, and staff members only offer up the "secret menu" item when someone comes in looking for a beer alternative. "It appeals to the gluten-free demographic," said Lampe.

Look for more options in the future—oh, and about that "secret menu" thing? Forget I said anything.

Unlike many of its counterparts, AVID's hard seltzer is derived from Northwest apples and sourced from the Cascade watershed. Tropical Smash, Raspberry Cosmo and Mandarin Greyhound round out the current flavor options. Dan McCoy, the owner of Seven Peaks, believes that boozy seltzer is much more than a temporary trend.

"I believe seltzers will continue to have a place in the crowded alcohol market and some, like ours, have attributes that make them more than a fad," he said. "Americans list health consciousness as a major priority in their lives. Thus, we focused on keeping our 12-ounce cans under 100 calories, coming in at 95 calories per can."