The public has another week to help craft an update to the plan that manages a chunk of southeastern Oregon. 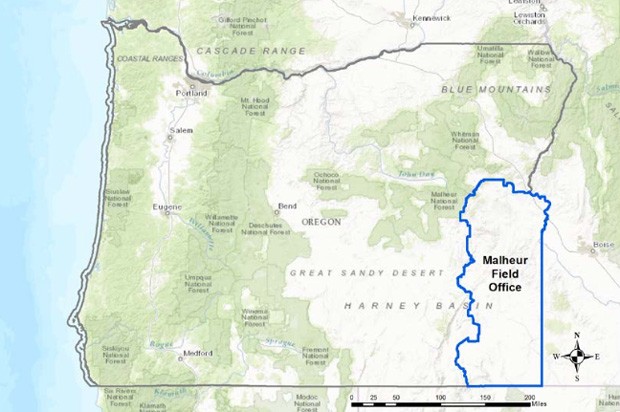 The Bureau of Land Management is amending its resource management plan for about 4.6 million acres of its public lands in southeastern Oregon. Federal law directs BLM to develop, maintain, amend and revise land use plans that direct the uses, restrictions and management of lands in the long-term. An amendment updates an existing plan, focusing on a limited set of specific issues. Disagreement over processes involving the Southeastern Oregon Resource Management Plan date back about 20 years, including court cases between BLM and the Oregon Natural Desert Association that resulted in a settlement requiring BLM to amend the plan to address wilderness characteristics, off-highway vehicle use and grazing management, among other factors.

BLM has laid out a few possible plans. Alternatives B, C and D would establish boundary areas and protect different units of lands with wilderness characteristics—large areas that it finds offer outstanding opportunities for solitude or primitive recreation—plus set varying limits on OHV use. Two of those plans would also set additional rules on grazing permits. BLM chose Alternative A that it says continues current management; would set no additional protections for lands with wilderness characteristics; and would continue current management practices on grazing permits and OHV use.

ONDA has warned that Alternative A would simply continue the 2002 plan's management of the area, without updating based on changes to the landscape seen over the past 17 years—including such factors as climate change, wildfires and endangered and invasive species.

"This area has some of the largest intact wild places that we have left in the lower 48," said Jeremy Austin, the Hart-Sheldon coordinator with ONDA, who noted how the landscape is vital to sage-grouse and other species such as pronghorn antelope, birds and pygmy rabbits.

The area has more than 1 million acres of lands with wilderness characteristics, areas that warrant more protection, ONDA has argued. The proposed plan also makes no changes to managing OHV use in the area, leaving it open to damage, the group stated, urging restrictions to limit motorized travel to existing routes. ONDA also warned of permanent damage to the environment from grazing. The group urged suspending grazing in areas that fail to meet the agency's own ecological standards; and setting up a process to let ranchers voluntarily relinquish their grazing permits.

Austin noted that the Southeast Oregon Resource Advisory Council met for nearly a decade to develop a method of identifying areas with wilderness characteristics. Advisory committees function under rules set by the Federal Advisory Committee Act, meant to recognize the merits of getting advice from the nation's citizens while also ensuring that advice is relevant, objective and public and that the committees comply with various cost and record-keeping requirements. According to its website, the Southeast Oregon RAC's 15 members reflect an array of interests and users of public lands, including grazing permittees, commercial timber, energy and mining, recreation and OHV groups, transportation, conservation, historic and cultural interests, elected officials, tribes, state agencies and academics.

"This is the opportunity to do that," Austin said of the process to amend the plan.

BLM's proposed plan would essentially "go back to that 2002 plan," Austin said. "That plan is no longer appropriate."

ONDA wants to see "a far more balanced approach to how these resources are managed," Austin said. "The BLM should be adapting over time, not going backward."

Julie Weikel, who lives south of Burns and served as the wild horse and burro representative on the Southeast Oregon RAC from 2012 to 2018, called that RAC a particularly involved and active one, and noted surprise at BLM's proposed plan. The RAC had supported a different alternative that recognized nearly 417,200 acres of land with wilderness characteristics that warranted protection.

These public lands are priceless American heritage—Julie Weikel tweet this

"It's a little disconcerting to see our recommendation not be part of the preferred alternative," Weikel said, adding that the RAC speaks as one voice directed only to the agency that it advises.

Weikel noted that protecting lands with wilderness characteristics means limiting certain activities, such as extraction work and road construction, that would preclude them from subsequently meeting the definition of wilderness. She called BLM's choice of Alternative A puzzling, since it returns to the management in place in 2002 and may wind up back in court.

"These public lands are priceless American heritage," Weikel said, noting that while national parks get a lot of attention, taking part in managing various different public lands "is a really important part of being an American."

"There's a whole lot of land out there that belongs to the public that they don't even know much about," Weikel said.

The public comment period closes Aug. 28. BLM could issue a final plan in fall, followed by a protest period before a decision in the winter. For more information, visit http://go.usa.gov/xnsQx.